29: In Praise Of King Rob Hello once again, dear reader – I hope you had a lovely weekend. Regular visitors to this dusty corner of the internet will remember that, last week, I told you I was off to Birmingham to perform our show, WiFi Wars and I’m delighted to report back that a lovely […] 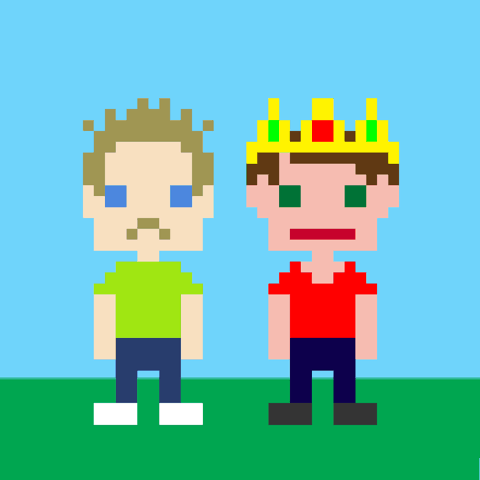 Hello once again, dear reader – I hope you had a lovely weekend. Regular visitors to this dusty corner of the internet will remember that, last week, I told you I was off to Birmingham to perform our show, WiFi Wars and I’m delighted to report back that a lovely time was had.

It was a special show for me and ‘King’ Rob for a couple of reasons. Firstly, we’ve never done a ‘full’ show before. I mean, we’ve done ‘full shows’ before, but in comedy-land that often means an hour (or, more accurately, 55 minutes), that being the length of an Edinburgh Fringe Festival show – the Fringe Festival being the cruel mistress that controls our annual calendar with the false promise of money and success. The show we did in Birmingham was an hour and thirty minutes, plus an interval. Which is fine, lovely in fact. Except, we hadn’t realised that’s what we were doing until a week before the show.

For those who don’t know, WiFi Wars is a show where the whole audience gets to compete on games, quizzes and the like using their smartphones, thanks to some clever tech created by the aforementioned King, Rob Sedgebeer. The downside of this is that, if you want the show to be longer, he has to create some new programming code wotsits to make new games and things possible (the more astute amongst you may have noticed at this point that the programming is not really my area – our favourite post-show tweet ever was from someone comparing us to Penn & Teller: one (me) does all the talking, while the other does all the clever stuff. Entirely fair.

The thing about creating new programming code wotsits is that it takes time, and it might not work if you haven’t tested it. Which is tricky. Because the only way to test if something works with 200 people, is to test it on 200 people. When they’ve paid £12 to come to the show, many of them, quite reasonably, assume it WILL work.

It’s a delicate balance. Part of the show’s excitement is the genuine seat-of-the-pants “we’re not quite sure if this is going to work” stakes but – of course – whilst the audience may forgive one or two instances of this, its unlikely anyone would feel they got value for money if they just sat and watched Rob quietly debug the software for two hours. Anyway, thankfully, it did work (mostly) and a fun time was had by all.

The other reason it was a special show for me and Rob was because it’s the first time we’ve done a version of the show just for kids. We’ve had kids turn up at the show before, but we’ve never billed the show as a kids show. The games are mostly retro games that a lot of younger people may not have come across (although the Oculus Rift makes an appearance). Not only that, but we always worried that kids might not be so forgiving, or patient, with any technical hiccups that may occur (there’s usually a few – what Rob’s doing is REALLY complicated). If we’re honest, we were also worried that their parents might hit us if their kids’ phones didn’t work.

Thankfully, the kids show was a delight. Fortunately, Rob remembered to turn on the computer’s swearing filter and sense-check people’s selfies before they appeared on the big screen. If he hadn’t, it could have been a very different show. Actually, the worst thing anyone submitted for either the kids show OR the adults show, was a massive Star Wars spoiler as a username. Fortunately Rob spotted it and blocked it, because Rob is BRILLLIANT.

My personal highlight from the weekend was seeing 100 children playing primitive paddle game Pong with their parents, cheering and yelling with as much glee as they would playing modern Minecraft or Mario. Whilst we knew that adults enjoyed the show from previous performances, we were never sure how much of this was nostalgia but, seemingly, Pong remains as compelling as it ever was, thanks to some of the purest gameplay we’ll ever see.

If the above has whet your whistle for WiFi Wars, fret ye not! (urgh) The Royal Institution, no less, has been foolish enough to give us our own residency and we’ll be presenting some brand-new King Rob toys there on the 5th February – if you’d like to be the first people EVER to play on them, you can grab a ticket here. ***UPDATE: Apparently it’s sold out, but you can sign up to be on the waiting list on that link too*** The plan is to use these work-in-progress gigs as an opportunity to develop new software for an entirely new 2nd show which we’ll be premiering in the Royal Institution’s main lecture theatre to 400 people (hopefully, maybe no one will come) in July.

We’d love to see you there.