“Allowing dogs to chase and terrorise wild mammals is abhorrent. End of story." 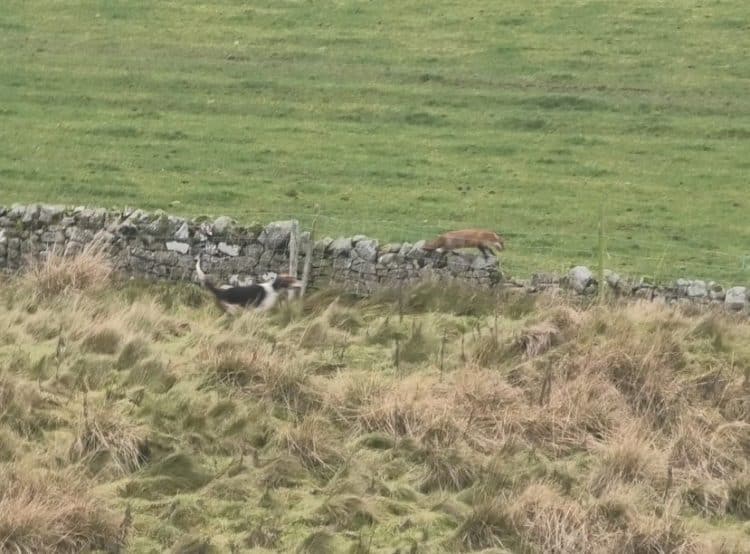 Cops are investigating a video of a fox hunt – after outraged campaigners alleged dogs were used to chase down the animals.

The video appears to show a dog chasing a fox over a wall during a hunt near Kelso, Scottish Borders – and was slammed as ‘abhorrent’ by an anti-hunting group.

Furious campaigners have reported the video, which was filmed near Hume Castle on December 22, to the police.

The League Against Cruel Sports Scotland said what can be seen in the footage is ‘unacceptable’ and called for a ban on hunting to be tightened.

Traditional fox hunting was banned in Scotland in 2002, but hunts in some forms are still allowed.

Dogs can be used to flush foxes from cover and drive them into the open – but then the fox should be shot.

The Buccleuch Hunt said it operated within the law at all times and described the allegations as ‘spurious’ and ‘politically-motivated’.

Robbie Marsland, director of the League Against Cruel Sports Scotland said: “Whether or not this incident is deemed to be illegal remains to be seen.

“But as far as we’re concerned what can be seen in the footage is far from acceptable.

“Allowing dogs to chase and terrorise wild mammals is abhorrent. End of story.

“The footage has been passed to the police because in our view, it appears to be illegal hunting.

“There’s not a gun in sight and from what we could see, no intention to call the dog off the fox, or dispatch it safely with a gunshot.

“This is yet another example of why we need a proper ban on fox hunting in Scotland.

“Hunts are routinely hunting in a way which shows total disregard for the law which is why we wholeheartedly support the Scottish Government’s intention to bring forward a new Bill to really ban hunting.”

“The hunt is absolutely clear that it was operating wholly within the law and in accordance with the Scottish Mounted Foxhound Packs Fox Control Protocol on the 22nd December.

“There is no evidence to support any claims to the contrary and the hunt urges animal rights activists to stop wasting police time by making spurious, politically-motivated allegations.”

A Police Scotland spokesperson said: “We are aware of a report relating to fox hunting on land near Kelso on Wednesday, 22 December, 2021.

“Officers are awaiting further details from the complainer and enquiries will be carried out to establish the full circumstances.”

A Scottish Government spokeswoman said: “Despite the ban on hunting introduced in 2002, we are aware there remains considerable public concern about fox hunting in Scotland and doubts about the operability of the legislation as it currently stands.

“It is our intention to put an end to this practice for good, and we have committed to bring forward legislation to do so before the end of the current parliamentary year. “