A petition calling for the government to revoke Article 50 has just past four million signatures and is set to surpass previous records for epetitions for parliamentary debates. The petition can be found here: https://petition.parliament.uk/petitions/241584 Millions of people have added their name to the petition in the hours after Theresa May delivered a disheartening speech […] 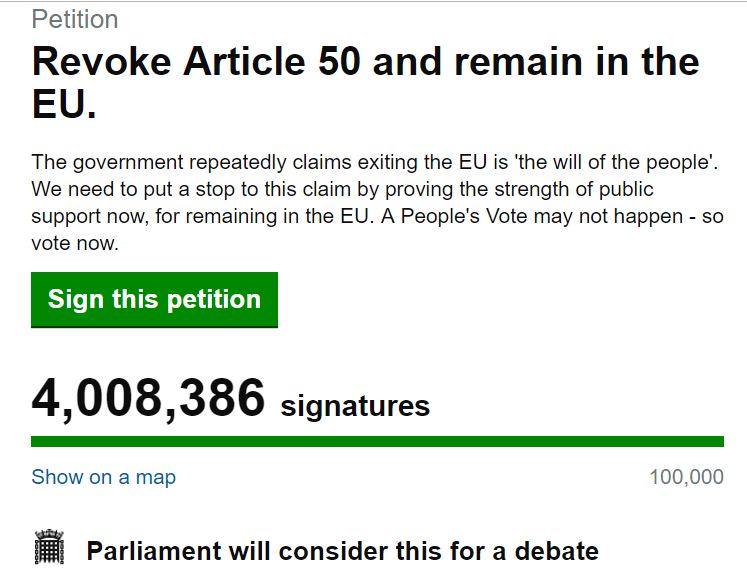 A petition calling for the government to revoke Article 50 has just past four million signatures and is set to surpass previous records for epetitions for parliamentary debates.

The petition can be found here: https://petition.parliament.uk/petitions/241584

Millions of people have added their name to the petition in the hours after Theresa May delivered a disheartening speech to the nation earlier this week, hitting out at MPs for the failure of Brexit, and telling the country she is with them.

At its current growth rate, the current petition is set to smash the previous UK petitions record, set in March 2019.dwarfing the previous record of 4,150,260.

Brexiteers and pro-Brexit media have tried to dismiss the unprecedented epetition.

Brexiteer Julia Hartley-Brewer wrongly suggested people could sign the petition more than once with the same email address for instance, as the Express claimed most signatories were outside the United Kingdom.

According to the pro-Brexit paper, Brexiteer Nigel Farage wanted a public inquiry to understand why people in Russia and North Korea were signing it.

But parliament’s petitions committee insisted that 96% of signatories were from the United Kingdom.

It tweeted on Friday: “A few people have been talking about fraud and overseas signatures. As of this afternoon, approximately 96% of signatures on the petition were from the UK. That’s broadly what we’d expect for a petition like this.”

Many Brits abroad also took to social media to say that they had signed the petition and were not indeed foreign bots.

The landmark was hit as hundreds of thousands of people are heading for London’s People’s Vote march.

Saturday’s “Put It To The People March” takes place on what was supposed to be six days before the UK was due to leave the EU, before an extension to the departure date was given.

Organised by the People’s Vote campaign, the rally on March 23 is expected to attract similar numbers to October’s huge demo at which reportedly 700,000 people turned out – the biggest demonstration on British soil since the Gulf War.