Geronimo was euthanised by Defra vets this morning after a protracted legal battle. 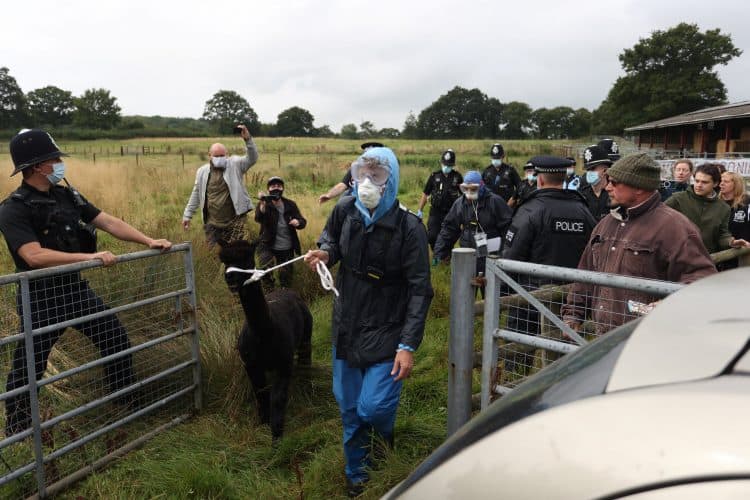 The owner of Geronimo the alpaca is “absolutely devastated” after the animal was seized from her farm and culled by government vets, just days before a warrant for his destruction expired.

Around 20 police officers arrived at Helen Macdonald’s farm near Wickwar, South Gloucestershire, along with four staff from the Department for Environment, Food and Rural Affairs (Defra) dressed in overalls, masks and goggles, at 10.45am on Tuesday.

Campaigners, who have been camping out at the property for weeks, loudly protested as the alpaca was rounded up and his microchip checked.

Geronimo, who has twice tested positive for bovine tuberculosis, was tied with white rope before being pulled through a field and loaded into a waiting trailer.

The trailer left the farm at 11.20am and, by 12.40pm, Defra confirmed that the animal had been euthanised by staff from the Animal and Plant Health Agency (Apha).

‘Taken away by force’

In a statement, Defra said Geronimo had been culled “as a necessary measure” to control the spread of bovine tuberculosis. A warrant for his destruction was due to expire on 4 September.

Macdonald insists that bovine tuberculosis tests previously carried out on him returned false positives, and thousands of members of the public had backed her plea to halt his destruction.

She was not present when Geronimo was removed from her farm but spoke to reporters there shortly afterwards.

“I am absolutely devastated to report that Defra have taken Geronimo away by force this morning,” she said.

“They have refused to inform me where they are taking him. As far as I understand, Geronimo is still alive, all alone in a trailer heading somewhere, absolutely terrified, taken from his herd where he has lived for four years.

“Over the last two weeks, we have tried to engage constructively and persistently with George Eustace, Lord Benyon, George Eustace’s special advisers, senior Defra civil servants and multiple MPs and government scientists, proposing a different way forward that would enable the government to address their stated priorities in tackling bovine tuberculosis and also save Geronimo’s life.

“The government have refused to engage in good faith. We now know they have been stringing us along for the last week, fobbing us off by saying that people were on holiday and would get back to us this week.

“Now we know that they not only ignoring our consistent pleas for constructive dialogue, but had no intention of engaging with us.

“In fact, all the time, they were simply planning to murder Geronimo. This is yet another appalling demonstration of bad faith and duplicity by the Secretary of State and everyone at Defra.”

‘Manhandled out of my farm’

She added that she is “absolutely disgusted” with the government, which she said had used a “falsified test that has no validity” on the alpaca.

“This morning, Geronimo has been manhandled out of my farm,” Macdonald said.

Asked how force was used, she replied: “You’ll have to ask the poor witnesses that witnessed him being rounded up and dragged into a horsebox.

“These are barbaric actions of unscientific, abusive people in government.”

She called for Eustace and Lord Benyon to go to the farm to speak to her, as well as an independent witness to be present when a post-mortem examination is carried out on the alpaca.

In a statement, Defra confirmed that a court warrant had been used to enter the farm to remove Geronimo, who was then euthanised.

It said bovine tuberculosis (bTB) is one of the “most significant animal health challenges that England faces today” and costs taxpayers more than £100 million each year.

More than 27,000 cattle were slaughtered last year to curb the spread of the infectious disease, it added.

Chief Veterinary Officer Christine Middlemiss said: “This is a terribly sad situation and our sympathies remain with all those affected by this devastating disease.

“No-one wants to have to cull infected animals if it can be avoided, but we need to follow the scientific evidence and cull animals that have tested positive for bTB to minimise spread of this insidious disease and ultimately eradicate the biggest threat to animal health in this country.

“Not only is this essential to protect the livelihoods of our farming industry and rural communities, but it is also necessary to avoid more TB cases in humans.”

Defra added that a post-mortem examination will be undertaken by veterinary pathologists from Apha, followed by a bacteriological culture of selected tissue samples.

A spokesman for Avon and Somerset Police confirmed that officers had attended the farm to support the execution of the court warrant.

“We’ll always support our partner agencies to carry out their lawful duties and our role is to prevent a breach of the peace and to ensure public safety is protected,” he said.

One supporter was briefly arrested after spraying attending officers with a water pistol, but was quickly de-arrested.

Related: No 10 can’t find anyone willing to interview Paul Dacre for Ofcom job