Runner Sam completed the run despite isolating due to the Coronavirus - by running the length of his balcony 5,000 times. 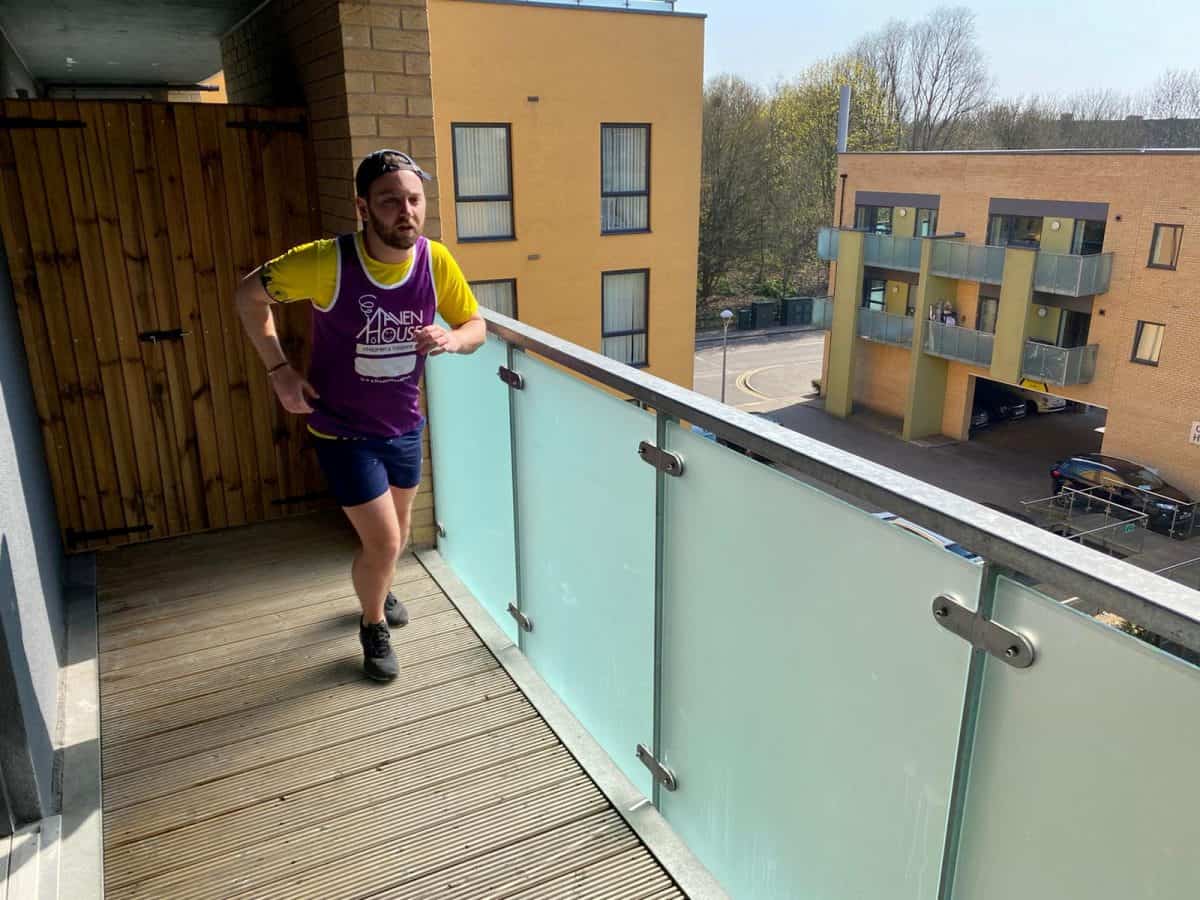 A runner has completed a half-marathon – by running the length of his balcony 5,000 times.

Sam Hustler, 27, completed the 21km trek by completing 5,000 “laps” of three metre balcony of his flat this weekend.

He had been due to complete the London Landmarks Half Marathon, which would have seen him take in sights such as the Big Ben, St Paul’s Cathedral and The Shard.

But due to the government-imposed restrictions of public gatherings due to the Coronavirus pandemic, event bosses have cancelled the race.

Organisers encouraged runners to get creative and identify their own local landmarks and map a run around hidden gems in their area on a solo run.

However, Sam has been self-isolating with his girlfriend Chloe Skerritt, 28, since Monday when she developed a fever and a cough.

So instead, he had to make do with the views from his third floor apartment in South Woodford, Essex, as he completed the run in three hours with Chloe cheering him on.

Sam said: “It was going to be my first ever half-marathon and I was excited to do it, so it was devastating when it was cancelled.

“I had put so much training in and it’s such a great cause I am running for, that I wanted to still do it anyway I could.

“I saw a video of a man in Italy who ran a full marathon on his balcony so I thought I could do a half-marathon on mine.

“I did a little 2km run on it on Tuesday and I thought well it’s boring, but I can do it.

“We have been self-isolating since Monday. We’re fine, but it’s more of a precaution really.

“We took the decision to work from home and not go out a my mum works for the NHS and my dad has health issues so we didn’t want to risk spread anything to vulnerable people.”

Amateur cricket player Sam, who had never previously ran more than 11 miles, said he had been training hard for the half-marathon and did not want that training to go to waste.

He also wanted to honour his commitment to raising money for Haven House Children’s Hospice, which supports children with life-threatening or life-limiting illnesses.

Sam added: “I’ve been running home from work in preparation for the event and really building up to it.

“Training had been going well and I was getting my speed up.

“I initially hoped to do it in under two hours but as the training went on I got quicker and I was probably on course to do it in less than an hour and 50 minutes.

“I really wanted to do it for Haven House and raise as much money as possible.

“They are an amazing charity that believes in the best possible life for every baby and child with a life-limited or life-threatening condition.

“They do so much for families who live in my community and I’ve seen the work they have done which is absolutely amazing.

“They’ve been going since 1990 and they’ve just put up an emergency appeal for funding.

“All their fundraising events have bee cancelled and their charity shops have had to close, which was a major source of their income.”

Related: What’s essential? In France, pastry and wine – in the US, guns and golf