There’s plenty of drama in Michael McLean’s Years of Sunlight about friendship and the exodus of Liverpudlians living in 1960s slums to new purpose built town Skelmersdale, but Mark Rice-Oxley’s Paul, best friend of parent-less Emlyn, is directed by Amelia Sears to stand as still as one of Anthony Gormley’s iron men statues on Merseyside’s […] 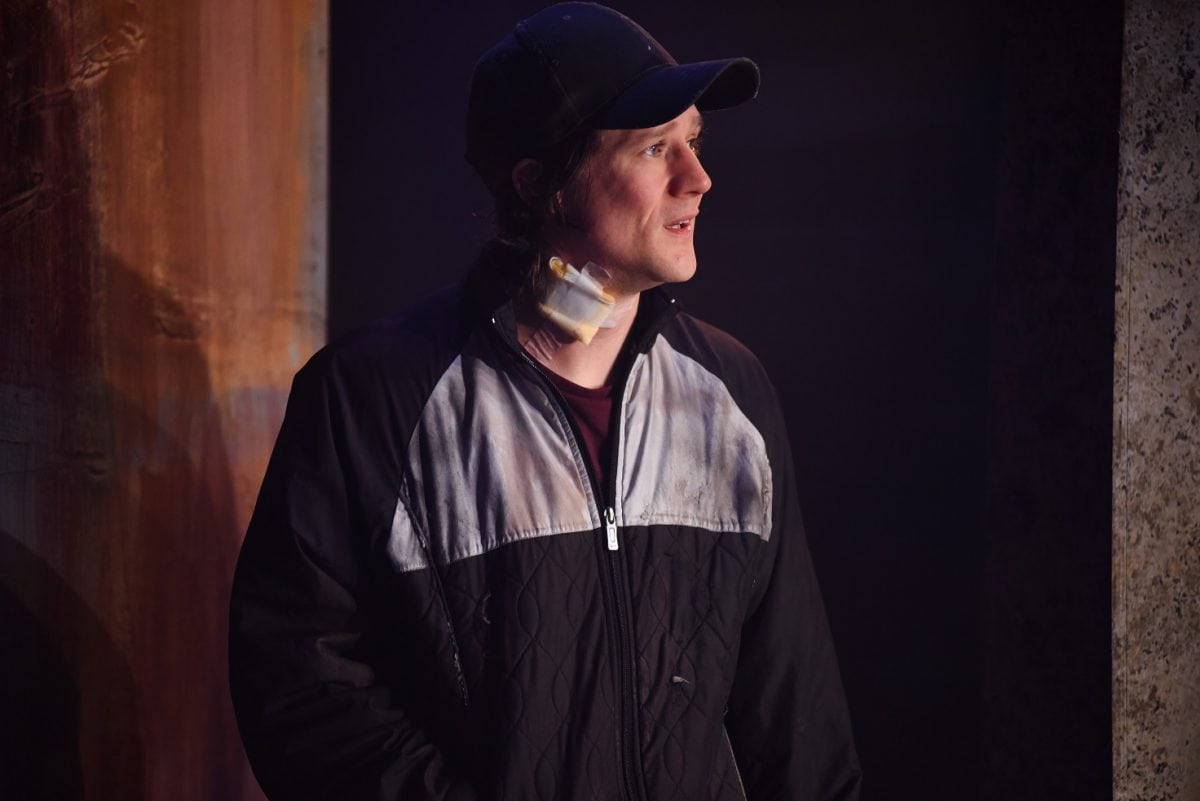 There’s plenty of drama in Michael McLean’s Years of Sunlight about friendship and the exodus of Liverpudlians living in 1960s slums to new purpose built town Skelmersdale, but Mark Rice-Oxley’s Paul, best friend of parent-less Emlyn, is directed by Amelia Sears to stand as still as one of Anthony Gormley’s iron men statues on Merseyside’s Crosby Beach at the top of the play.

Basked in Joshua Pharo’s Rothko-esque very northern feeling like light, Polly Sullivan’s molten stage and landscape is imbued with shades of melancholy, ambition and, tellingly, a sense of revitalisation, matched by Elena Peña’s ghostly sounds. This aesthetic sums up the paradoxes and complexities surrounding such rehousing projects like Skelmersdale and the effects it had on people like Paul: stricken and poor families were rushed to be housed in such places where they might harbour ambitions to have greater social mobility only to find that they missed the cramped and unhealthy and yet community driven conditions back in Liverpool. But as the conversations between Paul, his mum Hazel and a lost Emlyn swing back and forth in rich Liverpudlian and Irish lilts there is a sense of the unfamiliarity of Skelmersdale not just for the characters, but for us. No one seems to feel like they belong and everyone, except Hazel, wishes to leave: it is a clear indication that the play is trying to say that architectural projects such as this can be inadequate solutions to problems that are ultimately socio-political.

Time zips back and forth between past and present and whilst this takes a bit of getting used to, the genuineness of the sweet voices makes you warm to McLean’s characters and empathise with the jubilant ups and the tragic downs that especially befall Emlyn and will affect Paul and Hazel for the rest of their lives. It feels serendipitous that this play premieres just as playwright David Hare bemoans the lack of the state of England play and the state of British Theatre which in his eyes, has become “infected” by European trends. Lyn Gardner has written more than a rounded appropriate response, but it seems that this production nicely combines a mix of the social realist plays the UK is so famed for with a rather cooler and daring European aesthetic that challenges how we see such plays within our own oeuvre.

The play’s themes of social and domestic upheaval, the loss of industry, xenophobia (John Biggins nails it as Bob, we have all known a Bob like this) homophobia, migration and social inequalities and resentment are pertinent not just to our own land, but echo across the globe. If Bob, who hangs around Hazel like a drooling dog and cruelly dehumanises Emlyn, were alive today he would have voted for Brexit, Farage and supported Trump.

But Years of Sunlight is described as “a haunting cry for those left feeling shipwrecked from their old communities and abandoned by the post-industrial political system” and Bob is a victim of this as he desperately tries to press upon the two young boys his own disappearing culture and music and instead gets sneered at. It may be harder to like Bob, but we feel for his awkward attempts to reach out, even if he means to control by it. Set in the 1970s and spanning decades there is no reason why Years of Sunlight should not form a cycle of plays. It’s genius is in being a work that looks at such a genre afresh, a little bit like how Gormley himself wanted to change how we perceive landscapes by bringing something new to them, although his statues of course, were a look back to the old industries of the North West.  It is exactly what Emlyn, having at last found his mojo as an artist after years of being adrift on the streets as a drug addict, tries to do with his paintings. Thus, we see what others may label as “marginal lives” as not just visible, but revitalised. Yes, we are looking at the common man and the common woman as tragic heroes, and we certainly see poor Emlyn as this in the end, yet there is redemption as Hazel (her contradictions beautifully played by Miranda Foster) and Paul finally find out who they are and what they want years after being uprooted from Liverpool.

If there is a central character it is Emlyn played by an edgy Bryan Dick in an English version of Mark Renton perhaps. But he is also the working class Laurie Penny prototype, a rebel with piercing analytical skills and a fierce wit. Yet, forces collude to make his story tragic, apart from Hazel society rejects him and there are, therefore, no outlets for his frustrations, political views or creativity. This will make a person go mad.

The play seems to create its own art form. In the same way Skelmersdale is, it is self-reliant. The stage can be a wondrous sunset, or a hot bleached street (where even the light is fought over) the docks at Liverpool or a concrete block or a seaside resort. Like the characters’ lives, it is self-contained. The language too, whilst paying homage to some of Skelmersdale’s claims to fame (The Italian Riviera Ice Cream Company for example, who provided all the ices for Walls and Cornetto and the 2012 Olympics) is also beautifully economic.

Hazel: Have you got a nice car
Paul: Yeah
Hazel: What is it
Paul: A Saab
Hazel: What colour is it
Did you see his face
Combines Hazel’s materialistic concerns with her emotional turmoil.

Skelmersdale and other towns like it still thrive today and so do the societal problems that the characters face here. But there is something hopeful and redeeming in the play, we are asked to look at such housing projects in a slightly different way, we see that they can be places of beauty. Years of Sunlight stands somewhere between the darkness of Andrea Dunbar’s work and the razzmatazz of Jim Cartwright and it has as big a heart as one of Skelmersdale’s roundabouts, reportedly the third biggest in Europe.