Hedda is down, but Ibsen is up in this crystalline razor sharp new translation of the playwright’s supposedly realist play by Patrick Marber and directed by Ivo van Hove. The Belgian director and his years long collaborator designer Jan Versweyveld have removed every inch of realistic detail that made Ibsen famous so that Versweyveld’s light […] 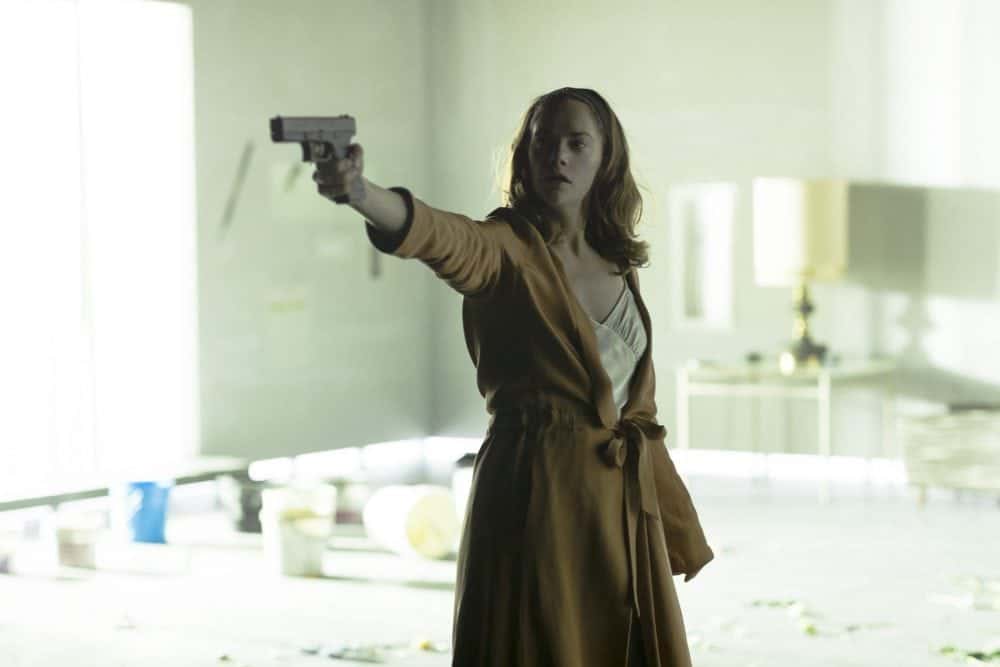 Hedda is down, but Ibsen is up in this crystalline razor sharp new translation of the playwright’s supposedly realist play by Patrick Marber and directed by Ivo van Hove. The Belgian director and his years long collaborator designer Jan Versweyveld have removed every inch of realistic detail that made Ibsen famous so that Versweyveld’s light cuts as easily across the bare stage as Marber’s parred back text cuts the air with all the ferocity of a pistol shot.

Watching, it feels like a finely distilled piece of art that is tighter than a drum that has been to drum tightening academy. You know it because there is not a misspent stare or subdued drum beat from sound designer Tom Gibbons out of place.

Whilst being a photographer of the every day realism that Ibsen observed around him, the playwright was aiming for a picture of internal despair with Hedda Gabler, to show the inability of a woman trapped in her marriage to act and for a feel that should transcend naturalism. Marber gets it. There’s no room for misconception in his words though there is plenty of ambiguity, a fine line that is difficult to tread. It means that every inch, every moment of Hedda’s internal agonies are understood. When she plays with the blinds on her sliding patio whose vertical rails are like the bars on the window of a prison cell, we understand how she holds the key to her own fate as tightly as both her husband Tesman and friend Judge Brack hold on to her as if she were a possession. Every move, from Hedda’s unconscious kneeling on the floor as she confesses to the morbidity of her marriage to her aiming her gun ad hoc over the heads of the audience amplifies and sometimes contradicts what Marber’s text is saying. Here is a woman who wants to fly, but does not know how. Yet, does she want to fly?

Understanding of Ruth Wilson’s Hedda slips through your fingers as easily as the silk negligee she wears for almost the entire production. Her relationship with her just as fiery and as complex husband Tesman (Kyle Soller brings a refreshing bite to him) is at odds in love yet becomes whole when the two are aggressive with each other. It is as if this is the only way they can work. But how Hedda plays games with Sinéad Matthews’ Mrs. Elvsted whose sweet confection like costume indicates her nature and whose covetous relationship with Lovborg (studious and conflicted Chukwudi Iwuji) Tesman’s academic competitor, is his downfall.

How Hedda is exultant, punching the air like a vicious child when she thinks she has gained the power over Lovborg she so craves and has set him on the path to her own particular kind of freedom. How small and vulnerable she becomes when her delusion is revealed by cruel, suave Brack (a chameleon like Rafe Spall).
Like a sniffing, but off the scent hound, Kate Duchêne’s Aunt Juliana paces the stage unaware of the tragedy unfolding around her. Éva Magyar’s maid Berte is reinvented as an accomplice to Hedda, she’s Hedda’s shadow and haunts the stage with a classic Nordic visage. At various points the actors sit and watch each other as if watching an exhibition. We start to wonder about the fourth wall.

Moments of lush introspection come between the scenes where Joni Mitchell’s Blue hangs like clothes on Hedda’s skeletal hunched shoulders as she despairs. The play may begin slowly, but its pace escalates, its grip takes you by the throat when it starts cutting to the chase. Echoing the end of Ivo van Hove’s A View from the Bridge red liquid heralds the beginning of Hedda’s demise. It is a relief, but at the play’s close there’s a strange lack of finality and this is the lovely modern twist, saves the play from being a little romantic and is the newness that is brought to Ibsen in a long essay that is about death and suicide and freedom and power. Ivo van Hove does something genius with Hedda and as Nina Simone’s “Wild is the Wind” plays out the audience there is a feeling of redemption and catharsis. It lets out an ambiguous cry, this production. And one that is not wholly despairing.

Hedda Gabler is on at the National Theatre until 21st March, it will be broadcast live by NT Live on 9 March 2017.