Pamflet, a self-described “London grrrl-culture zine”, launched its thirteenth issue this week, after a four-year hiatus. The zine’s creators, Anna-Marie Fitzgerald and Pheobe Frangoul, hosted a night of wine and chat at Soho’s The Trouble Club – all female member’s club / den of intellectual feminine iniquity, founded by the Evening Standard’s Joy Lo Dico […] 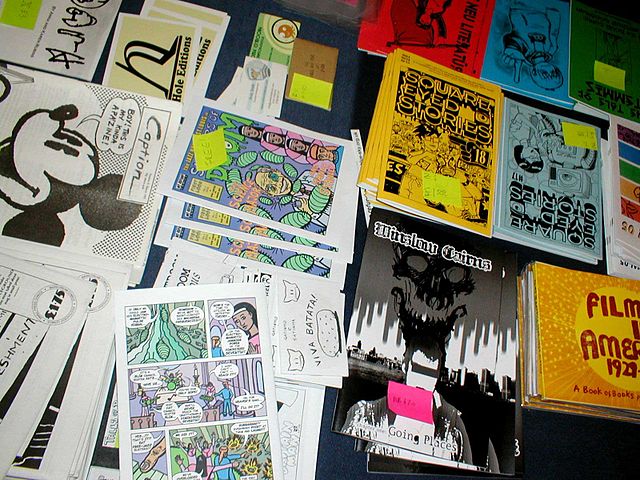 Pamflet, a self-described “London grrrl-culture zine”, launched its thirteenth issue this week, after a four-year hiatus.

The zine’s creators, Anna-Marie Fitzgerald and Pheobe Frangoul, hosted a night of wine and chat at Soho’s The Trouble Club – all female member’s club / den of intellectual feminine iniquity, founded by the Evening Standard’s Joy Lo Dico – to celebrate the occasion.

“We heard about The Trouble Club and came here for a drink,” said Anna-Marie. “We thought it sounded fun.” The two were talking about bringing back the zine and decided they would book it for a launch party. “Booking it gave us a bit of a kick– an incentive to get on and finish the new issue.”

Started in 2005 after Anna-Marie and Pheobe met and bonded over London, indie music and feminism, Pamflet’s fans range from lit-girl hero Zadie Smith to Vogue and the Sunday Times. The girls’ salons with writers and thinkers also proved a hit.

The four-year gap saw marriage, babies and house-buying, which informed the theme of the thirteenth issue: “Growing up – getting old!” Anna-Marie said. “And the internet.”

Women (and a few men) milled around chatting, back-dropped by projections of Pussy Riot, pink heart-shaped guitars, 90s Vogue covers and 00s Madonna, TLC’s “Unpretty” on the stereo, and rifling through the goody-bags full of zines and books – a reflection of the creators’ jobs in writing and publishing.

The thirteenth Pamflet, titled Absent in the Spring, covers everything from the clichés of fashion blogging, the “five stages of woman” (in emojis), the phenomenon of the aging “It girl”, the appropriation of grunge, and “over sharing” on social media. All wrapped up in an aesthetically-pleasing DIY riot grrrrl package.

Pheobe said: “This issue was like an elephant gestation – we were writing the stuff for years, but when it came to putting the zine together we found that already some of the material was out of date!”

She works in the online world now but said: “There’s something very seductive about print. Also there’s some things I don’t feel comfortable saying online, but can in a zine – some of the abuse you get online, I’m not tough enough to take that sometimes, but with something like this you’re sort of preaching to the converted!”

Don’t get too excited though – the girls said it might be another four years until the next issue. But keep your eyes peeled for a book from Pheobe.

Buy your own issue of Pamflet read the blog here.

Image courtesy of 24fan24 on Wikicommons