Its designer said the hybrid electric craft, which can land on the length of a football pitch, could become the go-to option for long distance green commuters 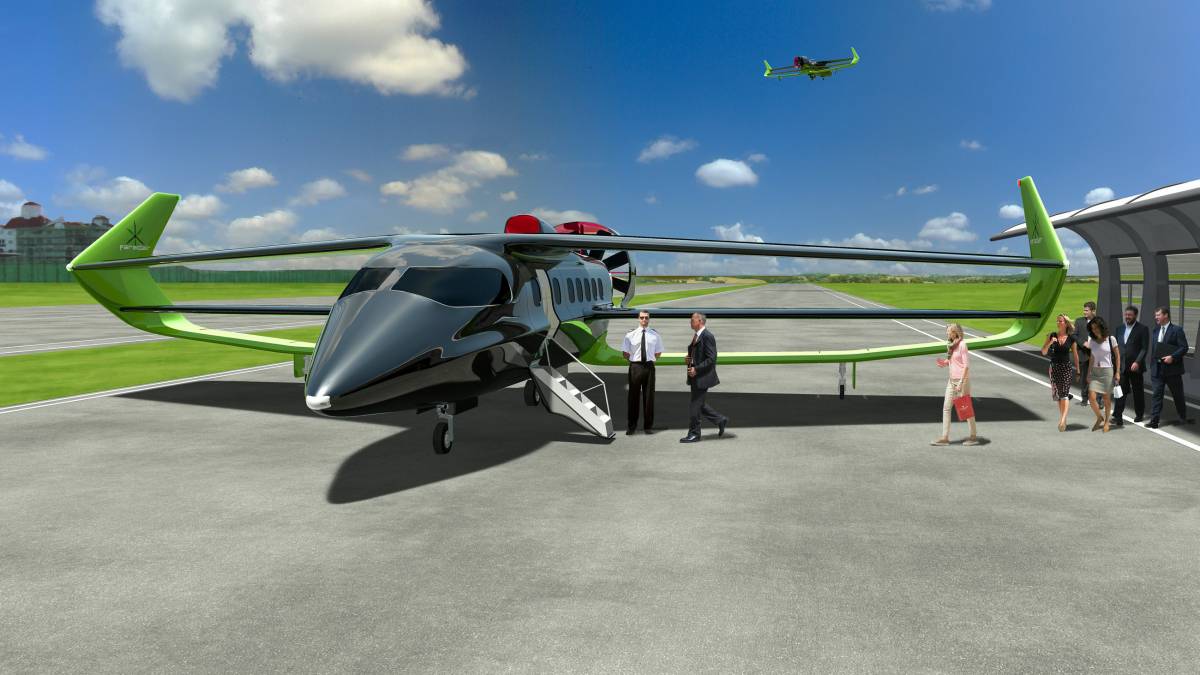 A three-winged eco-plane which could transform domestic flights in Britain should be airborne within six years.

Its designer said the hybrid electric craft, which can land on the length of a football pitch, could become the go-to option for long distance green commuters.

And with £50 return flights between Manchester and London it could allow workers to live further from the office and access cheaper homes.

The BEHA M1H is designed by Faradair, an aerospace startup based in Cirencester, Gloucs, and led by Neil Cloughley, who has worked at Virgin Galactic and Virgin America.

He said: “This aircraft’s low noise levels, good value and sustainability make it so exciting.

“It has the potential to radically change the way the UK’s regional and domestic airport market works.

“Regional airlines like Flybmi aren’t going bust because of Brexit. They’re failing because they are running at half capacity but still paying extortionate landing costs of major international airports.

“Our aeroplane is an answer to this because it can carry either 18 passengers or five tonnes of cargo converting usage in just 15 minutes.

“That versatility, combined with its low noise at around 60dba, means it can fly at night without waking up residents. This opens up multiple income streams for operators.”

The propeller of the unfamiliar-looking aircraft sits unconventionally at its rear generating a 230mph cruise speed.

In less than 300 metres, it can take off on grass, mud, tarmac and even water and land in a third of that space.

Neil hopes the aircraft’s adaptability could make it a success in places lacking in hi-tech infrastructure, like India and Africa.

At £3.4 million, the plane beats its rival, the Cessna SkyCourier, on cost, by around £1 million, can take off on runways a third of the length and can haul double the load.

Neil added: “The Cessna Caravan, which has been popular for 40 years now, has proven the value of utility aircraft.

“In order to build the full size prototype, we need the funding support to allow us to compete with our international peers.

“And how cool would it be to have a British aircraft manufacturer again.”

BEHA’s hybrid propulsion system combines electric motors with a turboprop engine, which can also run on bio fuel, making it cheaper and cleaner than alternatives.

And the company hopes the tri-plane’s green credentials will help meet growing demand for clean transport.

In the coming weeks the startup is due to announce a partnership with a major aerospace manufacturer and plans to be transporting passengers by 2025.

But Faradair has struggled to gain state backing, receiving just £5,000 from the UK government.

The UK, which hands major manufacturers 96 per cent of its Research and Development budget, spent just £7 billion on state-aid for innovation in 2016, compared to £36 billion in Germany and £12.7 billion in France.

Neil, who lived in San Francisco for four years, said: “The Americans have a saying in baseball, ‘swing for the fences’.

“That’s what the UK needs to do in manufacturing. Multi National Corporations (MNCs) can easily receive hundreds of millions in government funding whilst start-ups and small and medium-sized companies struggle for hundreds of thousands.

“MNCs are deemed a ‘safe-bet’, but the scale of their operations means they require much more time and money for an innovation SMEs are capable of turning around quickly and for a fraction of the cost.

“The UK is lagging behind in innovation. We need a culture shift to turn that around. We have got to take more risks, or face promising start ups moving elsewhere.”

Faradair entered a bid for United Kingdom Research and Innovation (UKRI) funding in May and is waiting to hear if it has been selected.

Neil said: “If this funding is not available to us, despite the aircraft meeting all the requirements of UK Government Future Flight policy ambitions, then we will have to seriously consider one of the existing offers we have to relocate our business across the Atlantic.”

Dr Lewis said: “We should not undervalue the ability of smaller companies, like this one, to rapidly innovate new products and this project strikes me as hugely flexible and adaptable for a wide range of tasks.

“I would certainly encourage colleagues within Government and the public sector, along with suitable industry partners, to support Faradair in its quest to deliver the first flying prototypes of this highly versatile system.”

Grant Shapps MP said: “Faradair reminds us of our history in aerospace innovation and how we may rebuild aircraft manufacturing facilities from General Aviation airfields currently under threat of closure.

“I genuinely believe the Faradair BEHA is an exciting opportunity for the UK, and I hope we will see this new British Aerospace manufacturer grow, develop and create jobs.”

Faradair boss Neil added: “Our order book is now open and we look forward to working with potential customers and airport operators, as we begin the build of our first demonstration prototypes later this year, intended for flight trials by 2022.”