TLE’s ultimate guide to the best things to do in Scottsdale, Arizona – from learning how to become a cowboy to riding a hot air balloon in the desert. In Scottsdale, you can do things you probably thought you never would, like attend a college exclusively for aspiring cowboys, or drink cactus cocktails. Located around […]

TLE’s ultimate guide to the best things to do in Scottsdale, Arizona – from learning how to become a cowboy to riding a hot air balloon in the desert.

In Scottsdale, you can do things you probably thought you never would, like attend a college exclusively for aspiring cowboys, or drink cactus cocktails.

Located around a twenty-minute drive from Phoenix, lies the curious, western film-set town of Scottsdale. It is a place surrounded by the Sonoran Desert, full of cacti older than the city itself (Scottsdale wasn’t incorporated until 1951).

The self-proclaimed ‘West’s Most Western Town’ has seen its population surge from a mere 2,000 to just under a quarter of a million in under 70 years. The reason for its rapid growth spurt could, in part, be due to its 300 sunny days a year.

Scottsdale’s good year-round weather makes it a place popular with ‘snowbirds’ – people who visit during the winter months to escape colder hometowns. And who could blame them? Winters rarely drop below 13C. But the weather isn’t its only draw.

This surreal city – complete with scores of quirkily-named streets (like North Superstition Lane), mouthwateringly-good Mexican food and a serious amount of gift shops – also has a special relationship with the big screen.

Actor Emma Stone was born in Scottsdale and Mary Poppins star,  Dick Van Dyke, used to live down the road in Cave Creek. The city also hosts an annual five-day film event (Scottsdale Film Festival) in November. Not to mention how film stars like Marilyn Monroe and Bing Crosby are alleged to have regularly hung around hotels in Scottsdale in the 1950s and 60s.

So if you like the idea of visiting a desert town in Arizona to explore the outdoors, fill your cowboy boots with Mexican food and relax in a place once popular with famous Hollywood faces, check out our list of the best things to do in Scottsdale.

The Ten Best Things to do in Scottsdale

Channel your inner Don Draper at the Mountain Shadows Resort, a mid-century hotel which feels more Miami than Arizona. Wes Anderson-like symmetry, modernist interior and more textures than you have time touch, make it one of the coolest hotels in Scottsdale. Mountain Shadows’ postcard-worthy view of the famous Camelback Mountain from the hotel’s reception is worthy of a visit alone.

Today the hotel is in keeping with how it was in its heyday – draped in mid-century Hollywood glamour. In tribute to times gone by, 1950/60s music still plays in the reception area. You can just imagine the likes of Zsa Zsa Gabor, Tony Curtis and Janet Leigh – all stars rumoured to have hung out at Valley Ho – swanning around some 50 plus years ago.

It was Scottsdale’s off-the-beaten-track location which deterred the paparazzi and enticed Hollywoods A-listers out to the desert, according to expert Ace Bailey, who runs art and culture tours at the hotel.

2. Gorge on views worthy of a John Wayne film from Camelback Mountain

Hike Camelback Mountain, a reasonably steep boulder-strewn trail with a 2,704 feet elevation. Set off early (around 4-5am depending on the season) to avoid crowds and prevent frying in the intense heat. There are two trails, Echo Canyon and Cholla so take your pick. For novice hikers or those with medical problems, consider using a hiking guide as there are a few sticky spots on the ascent.

If you’re quick and early enough, you’ll catch a glimpse of the sunrise over Scottsdale and surrounding areas, which makes waking up at such an unsavoury hour worthwhile. If you’re travelling from the UK, the early morning hike acts as a natural, energising remedy jet-lag.

Scottsdale doesn’t have one stand out local dish… but it does have sprout nachos. Head to Diego Pops to taste this bizarre, disconcertingly delicious combo. Scottsdale’s Mexican food influence is obvious – given its proximity to Mexico – but sprouts? Apparently, they are having a moment in the USA?

4. Play a round of golf in the Sonoran Desert

Make sure you cram in a round of golf. Arizona State is, after all, where five-time major Phil Mickelson plied his trade. And you’re never too far away from a golf course in Scottsdale, meaning there are plenty to choose from (51 in total). The majority made up of thick, lush green fairways rolled out like expensive carpets in the glow-gold Sonoran Desert.

5. Fill your boots with fast food down at Cave Creek

Check out Bryan’s Black Mountain BBQ where you can chow down on beer-cooked everything. Owner Brian, a mild-mannered ex-photographer, caters to vegetarians too with his life-changing pulled squash. Oh, and don’t miss out on his cookie ice-cream sandwiches.

Across the road, Big Earl’s Greasy Eats in Cave Creek is the place to go for a greasy burger. The art-deco style gas station, built in 1935, serves possibly the tastiest, and potentially most artery-clogging, meat patty’s you’ll ever get your hands on. Grab a Big Earl’s burger with extra cheese and fries, as well as a strawberry shake if only to dilute your sodium intake.

6. Saddle up and learn how to become a real-life cowboy

One of the best things to do in Scottsdale is to spend the day at cowboy college with Rocco, one of the world’s most famous living cowboys (according to him). Learn how to tend to your noble steed before galloping around the ranch like a poor man’s Butch Cassidy.

Finish it off with a cold one down at the Buffalo Chip Saloon where real-life cowboys go to swill down frothy tops, line dance and attempt to pick up new companions. Take I.D or risk being branded with X’s on your hands, which lets bartenders know you can’t drink alcohol.

7. Stay under the stars in a Flintstones-like desert resort

Built into the side of several ancient blimp-sized boulders, the aptly named Boulders Resort and Spa, previously a goat farm, fits into its surroundings like a whale in a vast ocean.

Staff at Boulders are always on hand to whisk you to and from your flower-scattered villa without hesitation. Apartments, decorated like ski chalets with a Navajo influence, are complete with Netflix, stunning viewing windows, and a copy of the New York Times is brought to your door each morning.

At Boulders you can listen to the chattering of birds, climb, play golf and drink prickly pear cactus margaritas in the middle of the desert.

When former urban planner, Curt Dunham, suggested to his wife that they should start producing their own wine, he didn’t think she’d say yes. But she did, so the two started looking at potential properties in Arizona.

Curt secretly didn’t feel confident enough to take the plunge, so developed a property criteria checklist – one that he never thought they’d be able to meet. They did. Now the couple run a vineyard and distil their own Arizonan wine. They also offer tastings to tourists at LDV Winery in Scottsdale. The wines are surprisingly superb so it’s well worth checking out.

Head to FnB after for the best grub in downtown Scottsdale. With an award-winning chef, the restaurant serves up the best locally-sourced ingredients family-style (like tapas). Ask the servers what’s best to order as the menu is always changing and they seriously know their stuff!

9. Float across the desert in a hot air balloon

Nothing makes you feel safer, when dangling in a giant picnic basket at 5,000 ft, than knowing you’re in the hands of a man who has been flying hot air balloons since 1975. Floating across the Sonoran Desert with Captain John at the reigns is as satisfying as popping a Valium on a long-haul flight. Touching down in the middle of nowhere to find champagne and Babybels waiting for you isn’t quite luxury, but it’s an experience. 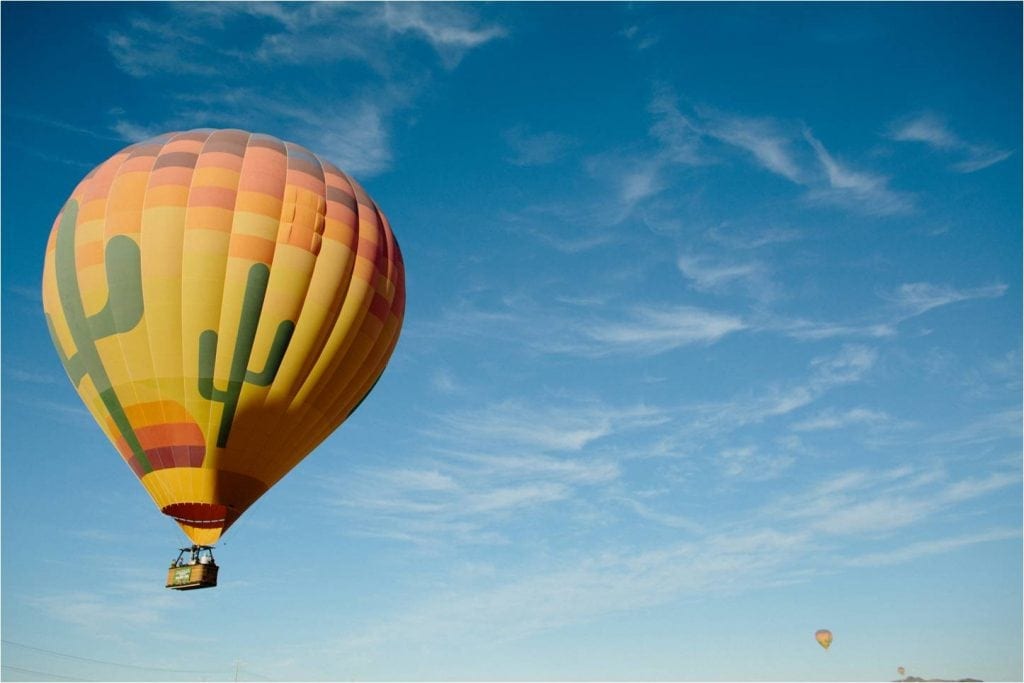 10. Go on an outdoor adventure with Rico Riley

No trip to Scottsdale is complete without an adventure with Rico Riley. The former pharmaceutical salesman turned outdoor adventure instructor, even cooler than his name would suggest. Armed with more outdoor knowledge than Bear Grylls and Ray Mears combined, and funny tales to boot (like that of cactus John, a man he saved from an aggressive cholla cactus), means he is exactly the sort of bloke you want to become your best friend, or more…

The company he co-owns, Black Mountain Adventures, runs tours – from rock climbing to hikes and mountain bike adventures in the Sonoran Desert – from the Boulders Resort and Spa. A visit to Scottsdale without an adventure with Rico would be like visiting China and not going to see the Great Wall.

This TLE journalist was a guest of Experience Scottsdale. For further information on the destination visit www.experiencescottsdale.com