There’s always plenty going on in Central America – but if you needed an extra excuse to throw the backpack on and spend your rainy day savings on a flight, here are some tempting happenings… Sunjam, Honduras, 1 – 8 August 2015 Taking place over eight days on an uninhabited cay off the coast of the island […]

There’s always plenty going on in Central America – but if you needed an extra excuse to throw the backpack on and spend your rainy day savings on a flight, here are some tempting happenings…

Taking place over eight days on an uninhabited cay off the coast of the island of Utila, part of the Bay Islands a few kilometres off Honduras’ Caribbean coast, Sunjam is the biggest techno-house music festival in Central America.

This is the first year that the festival will last for more than 24 hours, with two main events opening and closing the festival, while boat and beach parties hosted by music labels, promoters and collectives from the region will be held in between.

Since its launch in 1996, the festival has attracted world-class underground DJs with Swedish DJ Cari Lekebusch and Berlin-based DJ Tommy Four Seven headlining this year. sunjamutila.com

Twice daily ferry service operates between the mainland port of La Ceiba and Utila Island. The journey takes approx. one hour and costs $24 US one way / $49 US return per adult. www.utilaprincess.com

Every August, Ambergis Caye, Belize’s biggest island in the north east of the country, celebrates the reunification of the Mayan empire with a weekend-long multicultural spectacle comprising dance, music, pageants, food and drink from the Mayan World countries.

Traditionally, the final night, known as ‘Noche Internacional’, includes an appearance from a surprise international film star or recording artist followed by an all-night celebratory dance. The full line-up for the festival is yet to be announced. www.internationalcostamayafestival.com

Regular water taxis operate between Belize City and San Pedro on Ambergis Caye. The journey takes approx. 90 minutes and costs $20 US one way / $35 US return per adult. www.belizewatertaxi.com

To celebrate the end of slavery during the nineteenth century, Nicaraguans gather in the Corn Islands, located in the Caribbean Sea about 70 km from Nicaragua’s east coast, to march, dance and eat crab soup. Festivities take place on two separate days on each of the islands, beginning on 27 August on Big Corn and two days later on Little Corn, about a 45 minute water taxi ride away.  Celebrations start around 5am on Big Corn when residents are woken up to the music from a band playing from the back of a truck as it makes it way round the island. Local dance groups, horse races, games and the crowning of Miss Corn Island also take place across the two days.

The schedules for the water taxis between Big and Little Corn islands are coordinated with flight arrival and departure times and cost $4 US one way. www.bigcornisland.com

Although parties to celebrate Belize’s independence take place across the country, it is in Belize City where biggest parades are seen. The Independence Day Carnival, the highlight of the year for many Belizeans, is a frenzy of colours, floats and costumes, when the streets of Belize City are taken over by masqueraders dancing to music. Home to the largest concentration of Creoles in the country, the carnival road march has a dominating Afro-Caribbean theme. www.travelbelize.org

Delta flies to Belize City from London Heathrow via Atlanta from £510 return in September. www.delta.com 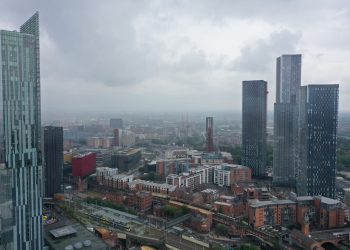