In a parallel universe where Lucy, Mr Tumnus and Aslan go skiing in Narnia rather than trying to vanquish the White Witch, Ruka in Finnish Lapland would be the perfect film set. The pines which dot the landscape are barely discernible, they look like huge, frozen cauliflowers and log cabins huddle together, ready to welcome […]

by Elizabeth Hotson
in Destinations, Travel

In a parallel universe where Lucy, Mr Tumnus and Aslan go skiing in Narnia rather than trying to vanquish the White Witch, Ruka in Finnish Lapland would be the perfect film set.

The pines which dot the landscape are barely discernible, they look like huge, frozen cauliflowers and log cabins huddle together, ready to welcome chilly adventurers . Presented with such winter wonderland credentials it struck me as odd that Finland is still relatively unknown as a ski destination outside the domestic and Russian markets, especially as Ruka’s ski season is one of the longest in Europe, starting in October and running until May. It seems that Rovaniemi, the world’s foremost ‘Santa experience’ location has done such a good marketing job that no-one seems to realise there’s anything else to do within in a 1000 mile radius. That suited me just fine. 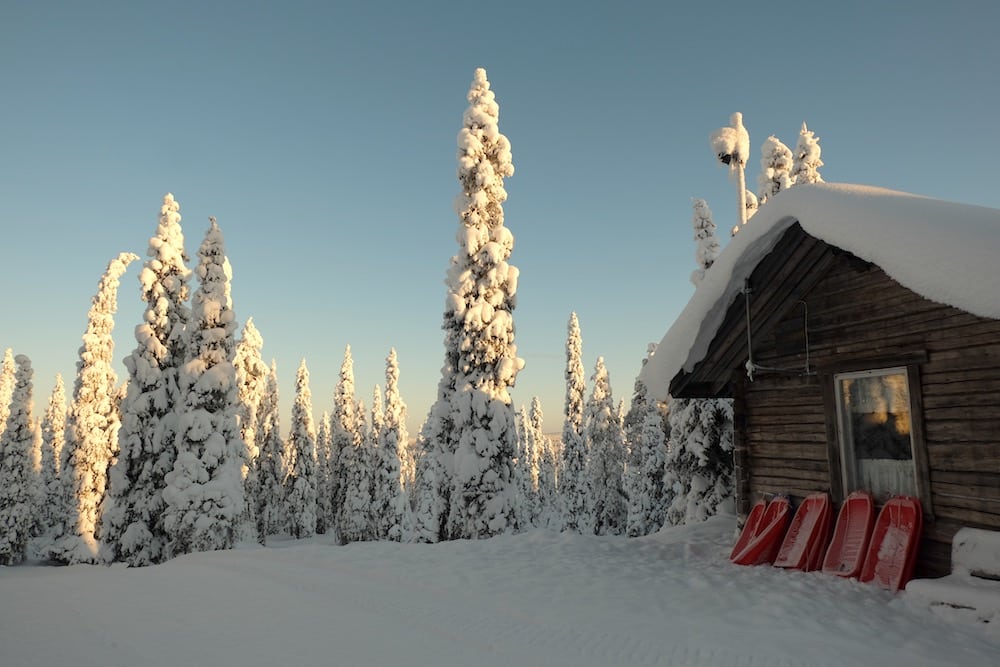 With the promise of spectacular scenery and quiet slopes, my partner and I booked a seven night self-catering apartment with flights through Crystal, the ski arm of travel giant TUI. We were surprised at how reasonable it was, but then we were going in term time and during one of the coldest, darkest times of year. We paid £600 altogether including a £100 supplement per person for five ‘arctic adventures’; cross country skiing, a reindeer sleigh ride, huskies, snowmobiles and ice fishing. We also signed up for ice go-karting through a seperate company, Ruka Adventures.

Arriving at Kuusamo airport, the reindeer and elves tableau in the middle of the baggage carousel told us this was a place that didn’t take itself too seriously. Perfect for a couple of very casual skiers whose main aim was to not snap any limbs. After a painless 25 minute coach transfer we arrived at our apartment, a two bedroom, two bathroom set-up complete with sauna, log burning stove and very effective drying cupboard. With the stunning views out the window and a well-stocked supermarket within a 20 minute trek, it felt like we’d hit the jackpot.

Having a comfortable place to crash would prove to be a real blessing after sub zero mornings of activities and bone chillingly cold afternoon skiing. In fact the coldest it got during the week was minus 25 which was just about bearable although there was the temptation to nip in for a hot chocolate and doughnut every few runs. Determined to stay until the bitter end of Friday’s late night skiing when the slopes are open until 11pm we spent several hours in a mountain top wooden hut. This really was no hardship; having discovered the hut the day before, we came armed with a DIY dinner and sat round the central fireplace warming our frozen fingers and grilling sausages. Whilst the local seven year old freestyle experts compared techniques and argued over Haribo, we sat grinning stupidly, wondered why we didn’t live here.

We booked our trip because it coincided with the Polar Light Festival, Ruka’s answer to Lyon’s extravaganza of illuminations. When it got to around 5pm each day the slopes starting glowing pink, blue and purple. The summit, bathed in hazy neon, was spectacular and unnerving and it was hard not to give into the temptation to stop and take photos at the start of every run. Ruka doesn’t get near Alpine destinations for altitude, but the otherworldly vistas are like nothing you’ve ever experienced. Your hair might freeze – mine did a bit – but it’s worth it for the singular eerie charm of the place.

We made an effort to get on the slopes every day but if you’re not an Alpine skier you won’t be stuck for things to do. The natural surroundings are made for winter activities; highlights for us were learning to cross-country ski, hitching a ride with a pack of excitable huskies and racing go-karts round an icy track. If you’re competitive and like a bit of danger, this last activity should definitely be on your list. After a few practice laps, you line up your car and zoom off for a no-holds-barred race. 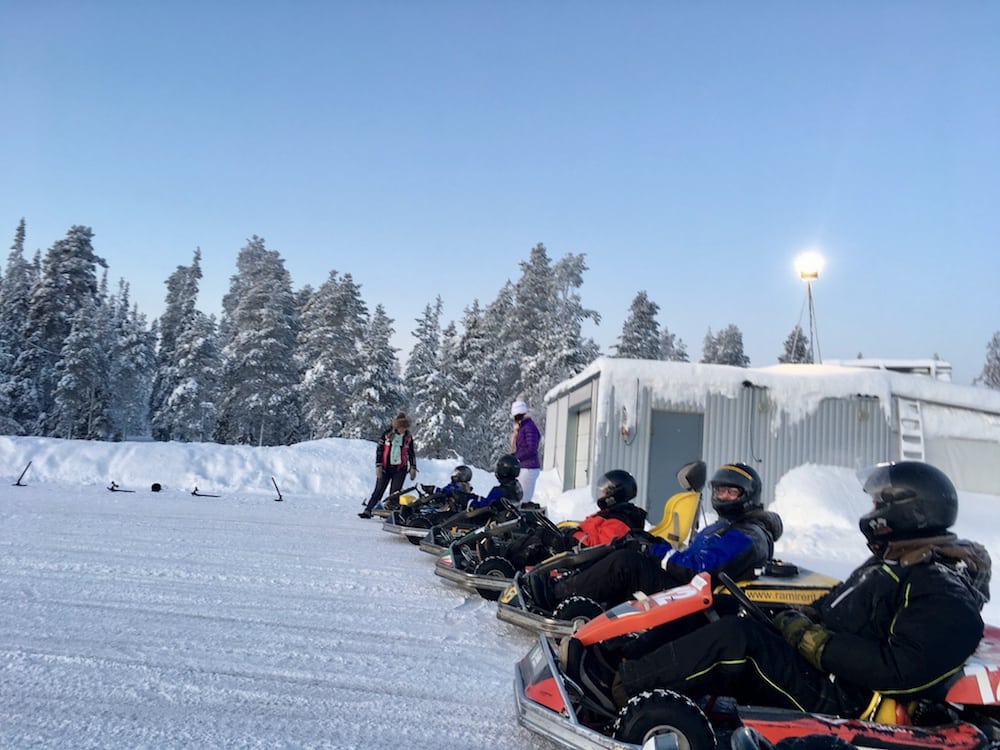 Manoeuvring the vehicles is relatively straightforward but mastering the bends takes real skill on ice. Some of the more enthusiastic drivers put their foot down too hard and too soon and ended up squashed against the barriers. As the cliche goes, the only thing that got hurt was their pride but still, I was more than happy to take the corners at a leisurely pace and slid to a stop in sixth place. 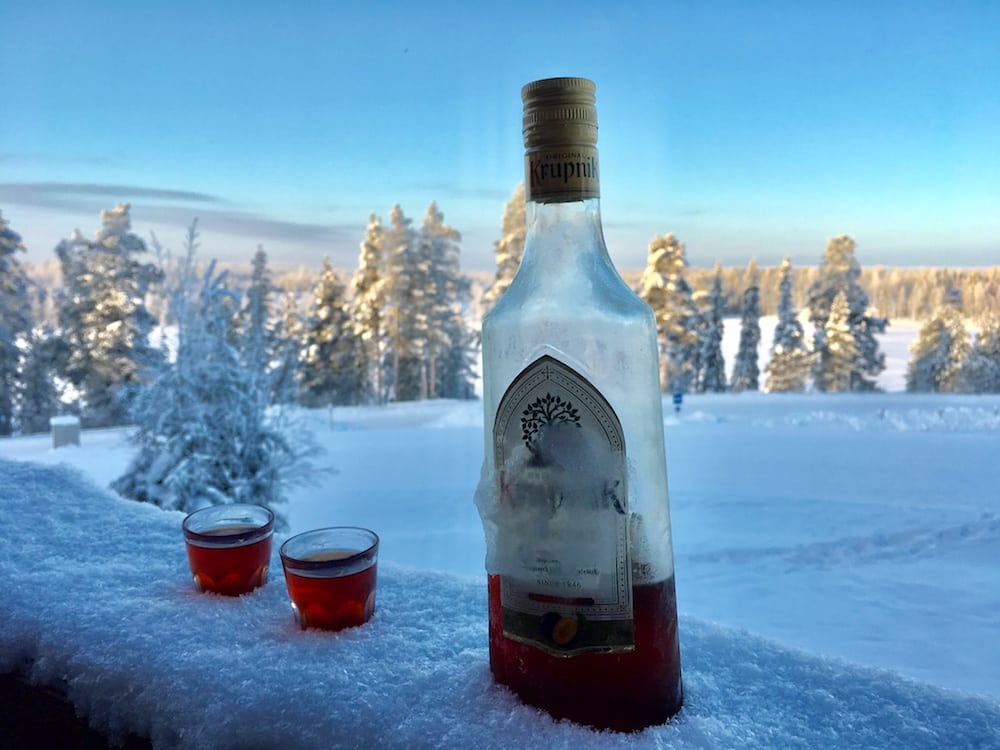 After expending all that energy, food was a priority. But then it always is. Before coming, we’d braced ourselves for a nasty blow to the wallet and we were therefore thrilled to find that eating out didn’t cost the same as a small flat. We did a lot of cooking in the apartment but away from our cosy lair, our favourite pick was Kuksa. Situated in the middle of the village, lunch was a daily changing buffet of traditional Finnish Lapland food. I am not ashamed to say we went four times. We feasted on homemade chicken soup, main courses of local fish or game and decadently buttery mash, salads, breads and the usual dark Finnish filter coffee to finish. And all for €14. Delighted at our discovery we visited one night for dinner which was sublime. From reindeer tartare and hearts to yes, you guessed it, reindeer shank to follow and a selection of local cheeses it was refined, elegant but still unmistakably Lappish. We drunk a few glasses of the local beer which whilst not mindblowing is on a par with the usual craft brewing suspects in the UK. If you go for wine expect to pay upwards of €12 a glass.

Whilst Ruka is a small resort compared to the Alpine giants, there’s apres ski if you’re inclined. Most nights however we had a welcome-home shot of vodka and a sauna followed by a hot chocolate with a nip of the local mint liqueur. Overall, as a winter holiday destination Ruka is charming, exhilarating and at times surreal. If you’ve ever wondered how it feels to be trapped in a snowglobe, this is the place for you.