When toxins are released into the environment by any other industry, or cancerogenic, endocrine disrupting fumes detected in public buildings, trained professionals in hazmat suits instantly crawl all over the hastily closed-off sites in question, testing the air taking samples with specialised equipment. Not so in aviation. Toxic gas-type fume emissions occur daily in aircraft. […]

by Guest Contributor
in Opinion, Travel 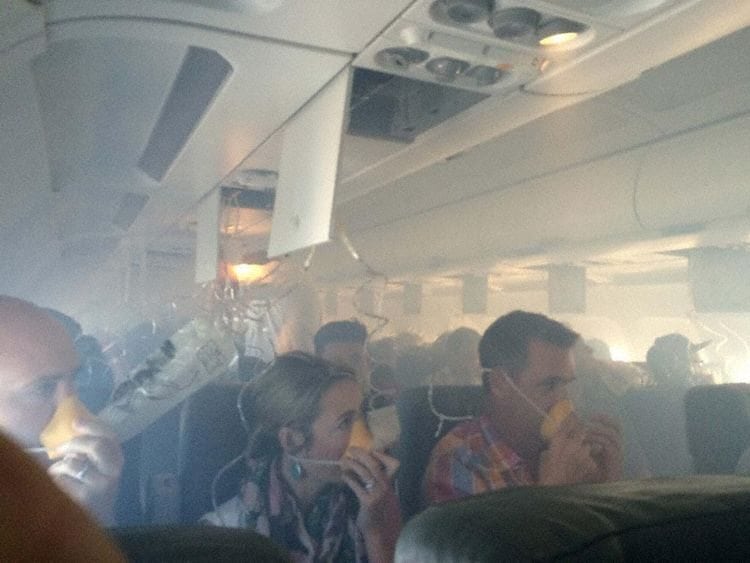 When toxins are released into the environment by any other industry, or cancerogenic, endocrine disrupting fumes detected in public buildings, trained professionals in hazmat suits instantly crawl all over the hastily closed-off sites in question, testing the air taking samples with specialised equipment.

Not so in aviation. Toxic gas-type fume emissions occur daily in aircraft.

This kind of scenario is happening regularly worldwide and is the aviation industry’s sore spot.

Escaping engine oil fumes can cause pilots and cabin crews to become incapacitated and unable to function. Increasingly passengers are also overcome by these physically harmful noxious fumes.

The rise in incidences is a worrying indictment of airlines’ safety procedures and required maintenance protocols of their aircraft, not to mention the pressure they put on their employees to ignore and not report.

The aviation industry seems to think it is safe and acceptable to breathe these harmful fumes in a confined, sealed space.

The health-damaging toxic fumes from heated jet oil or hydraulic fluids are hazardous to human health.

Seals that leak by design and filters that are not filtering adequately, plus non-existant warning systems to alert the pilots of Carbon monoxide (CO) in the air, are the problem.  Carbon monoxide is a product from a combination of several hundred pyrolyzed neurotoxic substances used in the engine fluids. CO is dangerous, deadly, and often odour-less. “Smells” and “odours” develop from other chemical reactions in the mix.

Belgian researchers have indicated in recent findings that the exposure to certain substances in the toxic fumes that are present at an alarmingly high level in the cabin air could cause permanent brain damage in pilots and cabin crew.

Frequent flyers who fly often might be in as much danger.

Regulators and governments ignore the magnitude of warnings or are slow to react. Professional organisations and expert individuals have been highlighting this very real problem for decades – over sixty years to be exact.

The danger of pilot incapacitation as a result of gas in the cockpit breathing air is a real health and safety issue, that can put the lives of hundreds of passengers on the line on any given flight.

Is it that the regulators and government are protecting their customers – the airline industry?

Despite alert circulars sent out by, for example, the Federal Aviation Administration, last in 2018, stating that “odors, smoke, and fumes “may be” introduced to the cabin atmosphere as a result of aircraft equipment malfunction/failure or by inadvertent or intentional actions,” nothing is happening.

The included recommendations that the International Civil Aviation Organization Document 9481 “should be reviewed” is ignored, or delayed by bureaucratic inaction.

In an October 2007 leaked internal email a worried Boeing engineer stated: “We are looking for tombstones. Before anyone with horsepower will do anything about it (toxic fumes), a disaster has to happen”.

He complained that he and other engineers had been given the “run around” over their fears.

The aviation industry’s mantra – “the wellbeing of our customers is our highest priority“ – becomes obsolete in the face of the right to healthy indoor air for aircrew and passengers.

Legal proceedings worldwide by crew and passengers on the grounds that they are ill from toxic fumes containing carbon monoxide and other health hazardous substances are on the rise.

Can pilots fly millions of trusting passengers to their destinations safely and can cabin crews who have to be fit in the face of a possible emergency save an aircraft if they are knocked out by toxic fumes before they realise there is an emergency? Hardly.

The health, safety, and wellbeing of all living souls onboard aircraft are at stake. Incidents can happen anytime, anywhere.

Will the industry continue to offer essential, but according to them “optional,“ safety features at exorbitant prices as they have been doing in the past? What will be the lessons of B737-Max?

Simply put: is a crash because both pilots become incapacitated at the same time needed before those with enough “horsepower“ will get into gear and do something?