As the weather becomes warmer, outdoor fun becomes more appealing, the hedonist’s island of Ibiza is open again for business. While it’s globally adored for its trance and dance, that’s not the only party vibe on offer. Last weekend was the official opening night of Children of the 80s, the Hard Rock Hotel Ibiza’s open-air […] 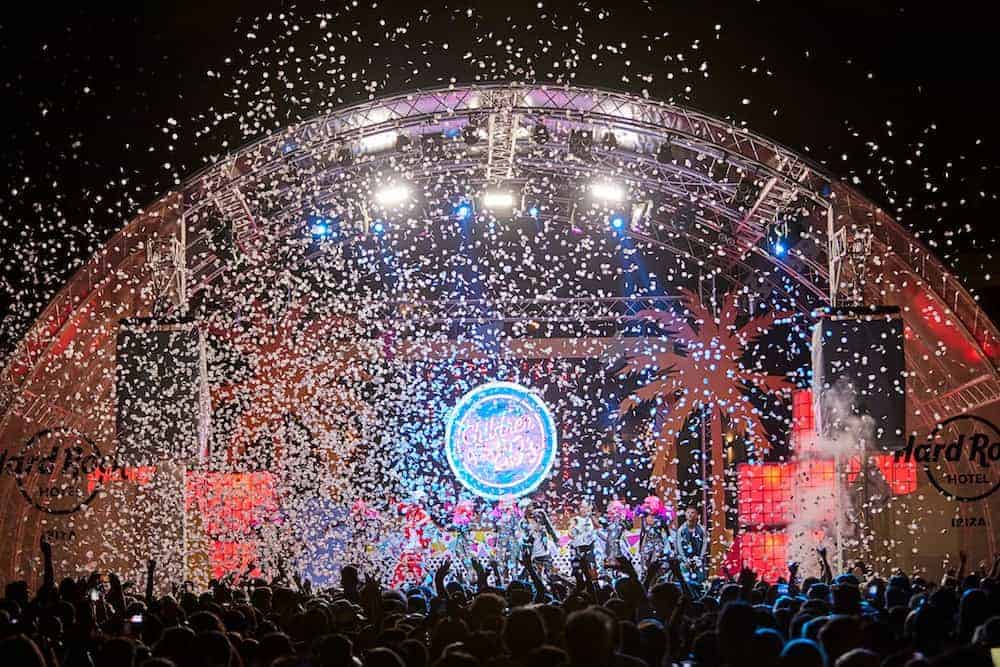 As the weather becomes warmer, outdoor fun becomes more appealing, the hedonist’s island of Ibiza is open again for business. While it’s globally adored for its trance and dance, that’s not the only party vibe on offer. Last weekend was the official opening night of Children of the 80s, the Hard Rock Hotel Ibiza’s open-air club on Friday nights for fiends of the decade that taste forgot. Though to be fair, there are some forgotten musical gems, resurrected for our listening pleasure around the central courtyard of the rawk-infused five-star hotel. We were there for this opening night and here’s what you can expect for the rest of the season.

There I was in my room, concerned that my off-shoulder top, leggings and orange shoes with long, pearl necklaces and lace gloves would be too much, but the commitment shown by others was pretty astounding. We had Olivia Newton John style leotards, Miami Vice Blazers, Madonna tu-tus and neon shellsuits. But berets off to the Boy George-a-like in the crowd that showed 10/10 commitment to the theme.

Oh the 80s. So many tunes still remain. Over the course of the night, we got airings of Madonna (of course), Eurythmics, a Queen and Grease megamix, and so many songs whose lyrics I’d forgot and whose names I still have. Sticking more closely to the general ‘children of the 80s’ crowd, a few newer and older tracks were thrown in, like I Will Survive, Love is in the Air and Cottoneye Joe. But all were played Ibiza stylee: that is, set to an electro-background, and remixed to give it new life and a killer beat.

To top off the night, we were treated to a live set by 80s biggies Alphaville – you know, the folk responsible for that oft-sampled tune Forever Young, and the still-atmospheric Big in Japan. Turns out lead singer Marian Gold still has some lungs on him. He belted out their big hits to a receptive crowd, and it added yet another dimension to the evening.

While they were the season openers, there’s some equal goodies line up for the rest of summer. Expect Whigfield on 21 June, disco queen Barbara Tucker (who did Beautiful People among other tunes) on 19 July, Set You Free stars N-Trance on 2 August, Katrina (we’re guessing from Katrina and the Waves) on 9 August, and Tina Cousins on 30 August. On other Fridays, tribute bands for the likes of Queen and Michael Jackson keep the party going.

This is the bit that surprised and delighted me. As an Ibizan novice, I expected the obligatory winding up time to be ooooh, about seven in the morning, and my ‘early to bed, early to rise’ circadian rhythm was not a fan of that. As it turns out, open air courtyard parties finish at the very sensible time of midnight, so Ibiza isn’t always a test of stamina. Hardcore partygoers can then head out to the more hedonistic venues (David Guetta’s F**k Me I’m Famous nights conveniently take place around the corner at Hï Ibiza just as Children of the 80s finishes), and moderate partygoers can enjoy a few drinks at The 9th, Hard Rock Hotel’s rooftop bar, afterwards. Or to be really indulgent, just retire to bed, because the rest of Ibiza is worth waking up early for.

The rumours are true – in the day, Ibiza is glorious, and it would be a travesty to spend a holiday there without seeing its beauty. After a spectacular brekkie (expect free-flowing cava, a range of fish, cheese and cold meats, and everything from tasty spinach rolls to huevos rancheros to churros), rent a car and head to its many hidden beaches.

Or grab a cab into Dalt Vila, Ibiza’s rusticy central area. That’s where you can mooch around the shops, enjoy a leisurely tapas and sangria on the cobbled pedestrian streets, or step inside the city walls for a lost-in-time amble. It’s quite a hike to the top in the summer heat, which might be just what’s needed to sweat out last night’s debauchery. If you’re so inclined, have a wander around the Contemporary Art Museum in the hills, which includes a large collection of Japanese prints.

Later, watch the sun descend on the Dalt Vila from a fab vantage point on the shaded rooftop bar of MiKasa, a boutique hotel that’s a water-taxi ride away. Divine.

Get more information on Children of the 80s events. Double rooms at the 5-star Hard Rock Hotel Ibiza are priced from €251/ £223 per night, based on two people sharing.  For more information, visit hrhibiza.com.