By Pat Levy Over the last couple of years Turkey has had a pretty bad press. On the border of  a devastating war zone,  damaged by political upheaval and terror attacks, trying  to accommodate thousands of refugees , its tourist industry is taking heavy body blows. Which is a terrible shame for those in Turkey […]

Over the last couple of years Turkey has had a pretty bad press. On the border of  a devastating war zone,  damaged by political upheaval and terror attacks, trying  to accommodate thousands of refugees , its tourist industry is taking heavy body blows. Which is a terrible shame for those in Turkey whose livelihoods depend on tourism and for all travellers who enjoy new experiences. I spent a week in Cappadocia in central Turkey and experienced nothing but friendliness, gawped at stunning, otherworldly landscapes, ate healthy food and stayed in boutique hotels with accommodation the like of which is hard to find in the world – caves.

Turkish Airlines flies to Kayseri, smack in the middle of Turkey and far from borders, and from there a 90-minute, GPS-assisted drive in a hired car along smooth well signposted highways brings  you to Uçhisar. This very small town has to be your destination: its cliff walls riddled with ancient passages and caverns, Uçhisar was largely abandoned in the 1920s when Greek communities fled the country. It is now home to Cappadocia’s best small hotels and offers superb views of a surreal landscape.

The old part of town has winding cobbled streets leading up to an outcrop of soft rock known as Uçhisar Castle, a natural citadel in Hittite times, its outline wearing away a little every time it rains. Its footpaths appear perilous and its honeycombed architecture a Gormenghast-like fantasy of misshapen towers, tiny doorways and myriad windows. From the summit, the highest point you can walk to in Cappadocia, there are views stretching across to the now dormant, snow capped Erciyes volcano; Turkey’s very own  Mount Fuji. 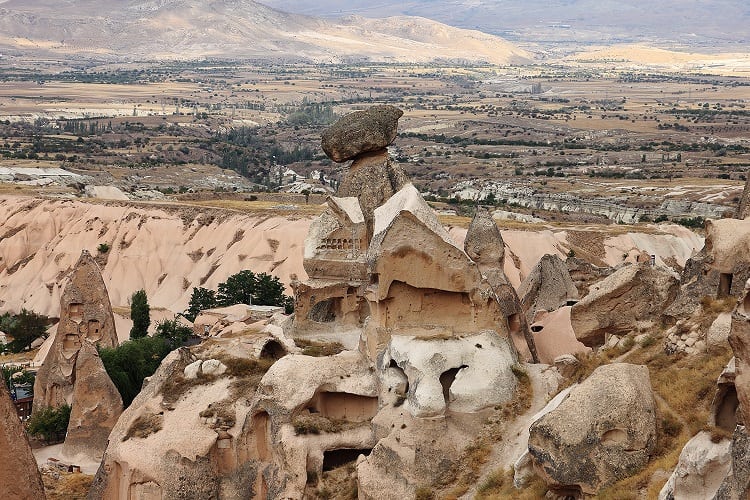 Pigeon Valley, so called because of the hundreds of pigeon coops scooped into the sides of the now abandoned caves, once homes to generations of people, is a grand afternoon’s walk through strange tower formations. Allow your imagination to wander and you’ll be expecting  little hobbit-like creatures to be seen peering out through the windows. The easy-to-follow trail starts in  Uçhisar, passing cultivated gardens with pumpkins, tomatoes and peppers tumbling about; pomegranate, damson and apple trees are plentiful. Leaving these behind, you have the empty valley to yourself and within 45 minutes you’ll be walking into Göreme, much bigger and more commercialised than Uçhisar.

The must-see place is Göreme Open Air Museum, a complex of richly decorated, early Christian churches carved out of the rock. During the period of Byzantine Iconoclasm, when images were outlawed, simple crosses were drawn in red paints but in time frescoes came to fill the walls and ceilings. These are incredibly well preserved, some of them were caked under centuries of pigeon droppings and took years to restore, stunning in their devotional simplicity. 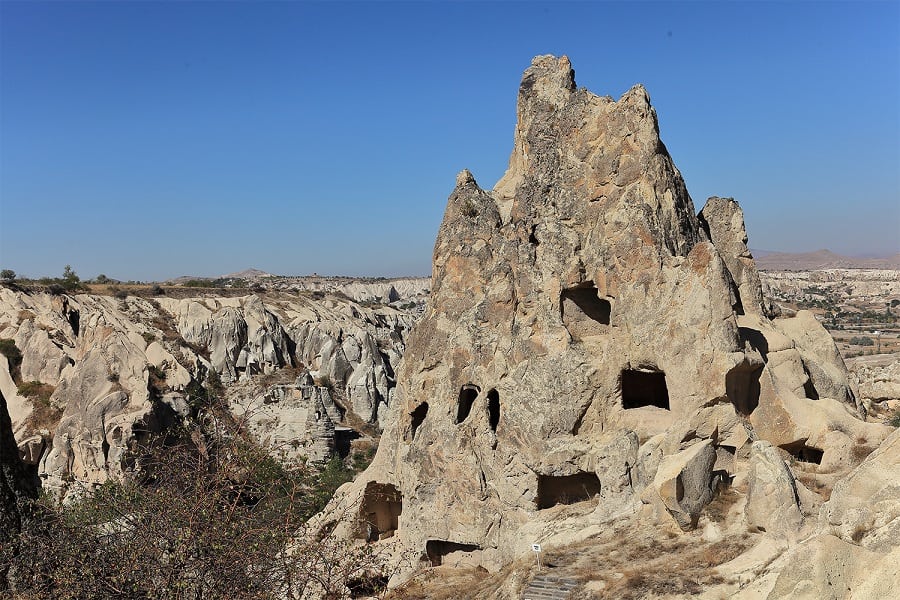 A few miles from Göreme is an isolated valley and the site of a deserted settlement called Zelve, another early Christian community of cave homes and churches. What’s special here is not the iconoclastic-era crosses on the chapel walls but the atmosphere of almost anchorite seclusion. The valley was inhabited until the early 1950s and today it attracts few visitors.

Uchisar has some lovely places to stay, suitable for all budgets. Sakli Konak is a small family-run budget hotel with only 8 rooms and  a friendly personal service. An old farmhouse, restored and extended, its rooms are all very individual with barrel vaulted ceilings or original wall carvings. The breakfast spread is vast and leisurely time is required to do justice to its enjoyment: local cheeses, dried fruits, olives, eggs, pastries, cured meat – and this is only what I can remember. The proprietor Riza is on hand to advise on what to see and do during your stay. Sakli Konak also functions as a very popular (and vegetarian-friendly) restaurant, offering local dishes such as the claypot beef, delivered by a cutlass-wielding waiter who proceeds to slice the pot open to reveal the meat. 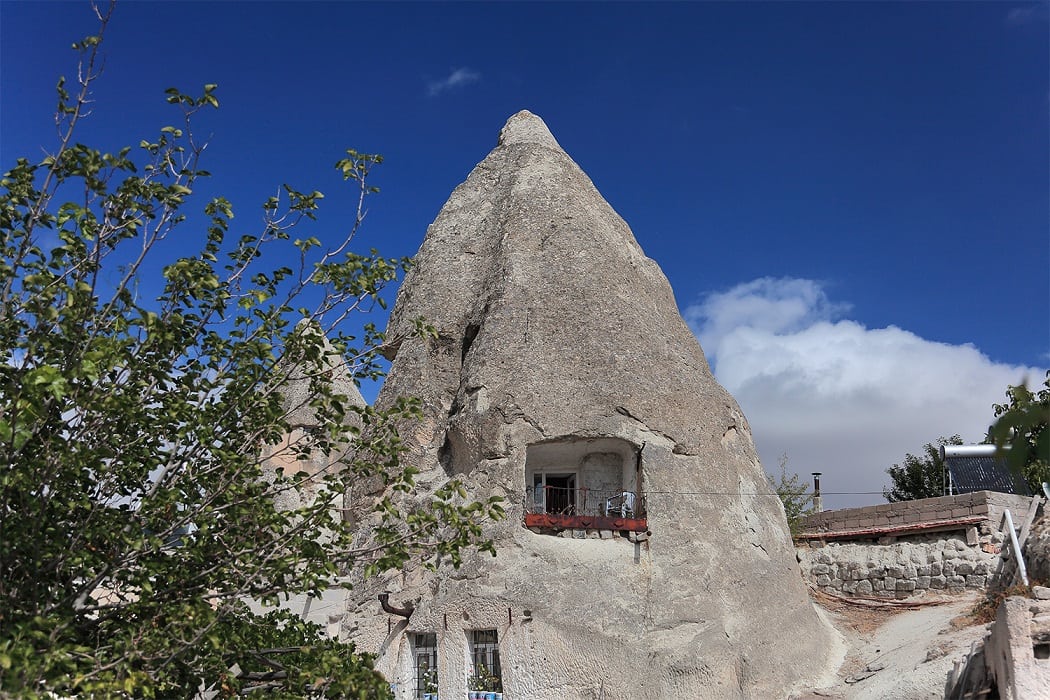 Truly special are the views at Taşkonaklar, with rooms that  range from one with an ancient Christian baptistery to indulgent  suites with hot tubs overlooking the valley. Set on several levels, with pretty terrace areas and beautifully manicured gardens, it’s hard to imagine anyone feeling disappointed with the accommodation.

Argos in Cappadocia also sits on a cliff edge and enjoys dramatic views. Check out its meeting room, Bezirhane, which over the centuries has been an ancient linseed press, a monastery and a rest stop on the Silk Road where camels were fed and watered. Seki, the restaurant, has a terrace overlooking Pigeon Valley and  gardens at the bottom of the cliffs.

The Museum Hotel lives up to its name with  Ottoman-style furnishings, glass cabinets filled with archaic outfits and  antiques decorating its walls. Real life comes with a little menagerie of peacocks, doves and tortoises around the grounds. The cavern-like rooms are suitably  atmospheric and breakfast here is a grand affair, with champagne chilling in ice buckets alongside the tea and coffee. Dinner in the Lil’a restaurant is served by friendly staff happy to warn you off the less tasty dishes. 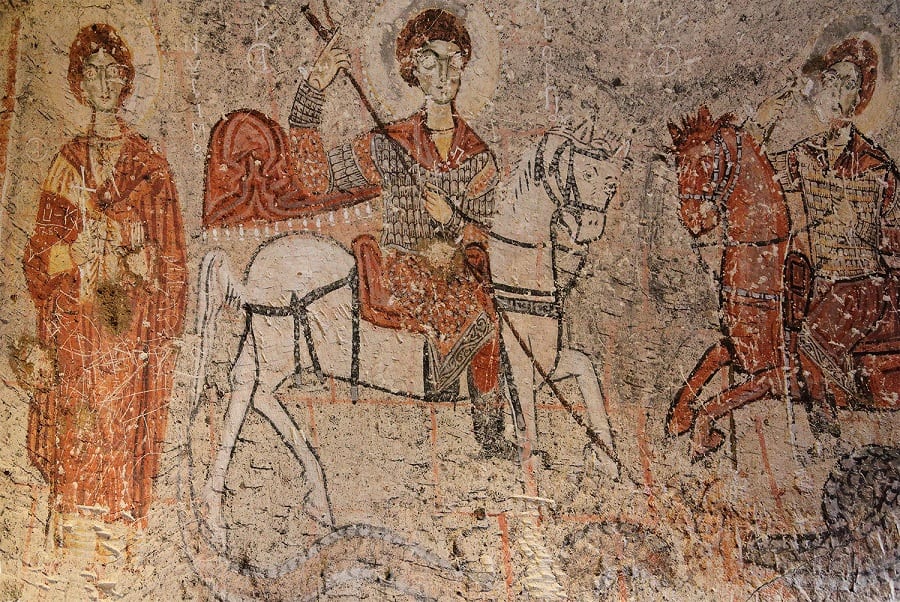 A close neighbour is Ariana Lodge, a modern take on cave living. High tech, with gas fires springing up at the press of a button, gorgeous bathrooms, and rooms less cave-like but more friendly for anyone prone to claustrophobia.

Cappadocia has cornered the market when it comes to balloon rides and the experience of imperceptibly rising high in the sky is almost de rigueur when you’re here.  Every morning, winds permitting, well over fifty balloons look to be floating upwards, a sight to behold if you are awake at dawn. You’re collected from your hotel and a light repast provided before transported upwards  in baskets holding some 30 people. Photogenic backgrounds for the selfie-obsessed, undeniably, but I found myself more moved by the millennium-old murals in Göreme expressing a community’s fond belief that life could have a happy ending.