Take a measuring stick to a map and you’ll find that, as the crow flies, Rotterdam is closer to London than most UK cities. Yet owing to a lack of transport options the Netherland’s second city is often overlooked by Brits who seek out alternative destinations at a mere sniff of inconvenience. That is, at […]

Take a measuring stick to a map and you’ll find that, as the crow flies, Rotterdam is closer to London than most UK cities. Yet owing to a lack of transport options the Netherland’s second city is often overlooked by Brits who seek out alternative destinations at a mere sniff of inconvenience.

That is, at least, until Eurostar launched a new direct service to the Dutch capital that transports you from city centre to city centre in just three hours. With just one stop in Brussels and with a more economical price tag than most intercity trains in the UK the new service opens up the possibility of hassle-free jaunts to a city that up until now would be considered to be off the beaten track for tourists.

Which is perverse for a city that was once known as the “Gateway to the World” thanks to its extensive distribution system that included rail, roads, and (of course) waterways. It is a facet of the city that hits you immediately on arrival to the grand Centraal Station which stands proudly at the heart of the city with typical razor-sharp edges pointing out into the sky. The rails are a hub of activity as you approach the city and the waterways that you traverse on the approach to the city hum with industry.

The city sits within the Rhine–Meuse–Scheldt river delta at the North Sea and dates back to the mid 13th century when a dam was constructed for a settlement. Its position as a major logistic and economic centre led to near-complete destruction of the centre in the World War II Rotterdam Blitz, which has resulted in a varied architectural landscape, including sky-scrapers (an uncommon sight in other Dutch cities) designed by renowned architects that have left a unique touch on the face of the city.

One building that is sure to make you stop and stare is that of the cube houses, designed by Piet Blom, which stretch like displaced Rubik’s cubes across a busy urban transport centre. The Market Hall, which sits nearby, is similarly impressive, designed as a 21st century nod to the Sistine Chapel with stark interior artwork that runs across its domed roof. The Erasmus Bridge and aforementioned central station also spring to mind as the architectural must-sees of the city, but you’d be a fool to keep your feet on the ground for too long if you want to see the best it has to offer.

For surely Rotterdam is best explored from the air and from the sea. On the one hand you have a vast range of waterbuses or taxis that ferry people from point-to-point across the city’s myriad of waterways, giving you a glimpse of the many suburbs and tourist spots. And on the other you have the enviable Euromast observation tower that gives you panoramic views across the cityscape both inside and out. 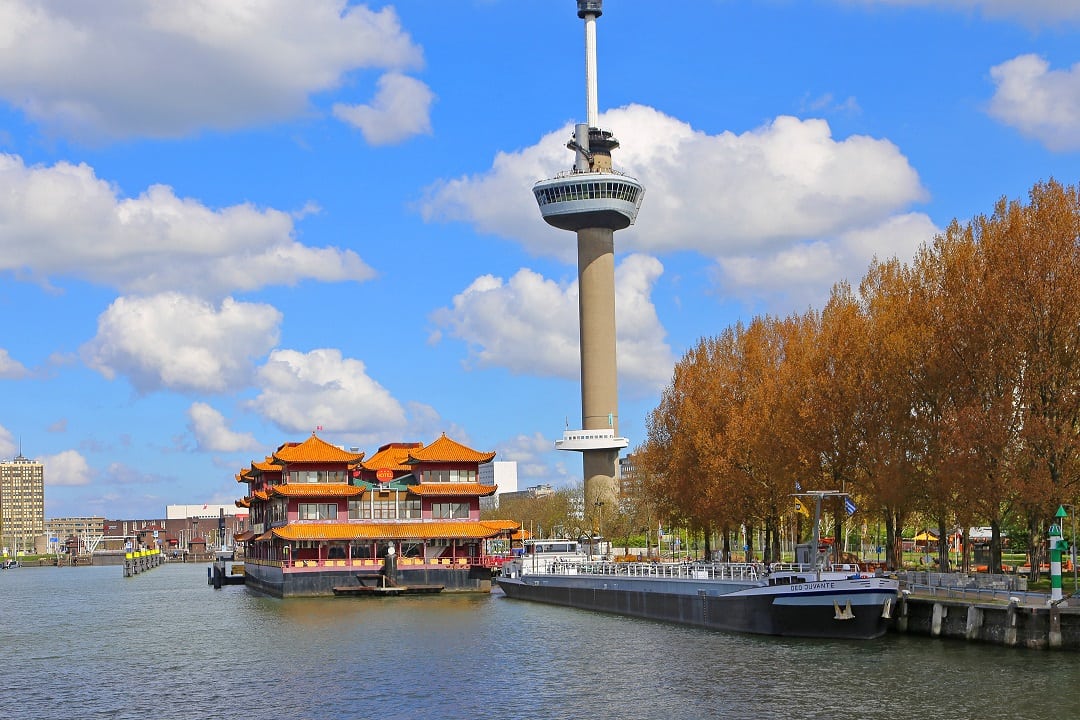 Exploring Rotterdam is very much about getting to know the new and the old, but for the best food and drink experiences I would urge you to err on the side of the latter. The Fenix Food Factory is a fantastic place to grab brunch, with an abundance of local independent stalls selling everything from artisan coffees to craft beer and traditional plates of food. Dinner in Hotel New York will give you similarly good heritage vibes, and if you want to whet your appetite with a cheeky cocktail beforehand then Stirr is a must.

Good accommodation isn’t hard to come by in Rotterdam, with places ranging from above average to downright spectacular. If you fancy splashing out on the latter then Mainport Hotel comes highly recommended. The spa rooms face out over the waterfront and include a private sauna, oversized round Jacuzzi and a King size bed that just swallows you up after a long day on your feet. The hotel also boasts a spa, swimming pool and gym that give you ample opportunity to wind down.

You should be forewarned that the return leg back to London on the Eurostar requires a stop-off in Brussels until a customs agreement is settled in the Netherlands, but with a couple of hours overlap you’ll have plenty of time to hit a nearby restaurant for Moules-frites and a cold Belgian beer, as well as time for a mandatory chocolate haul too, of course.

Top Ten Things to do in Rotterdam

Rotterdam’s Markthal offers a plethora of food and drink options encased in a domed building that is emblazon with fascinating art work. You can pick up Dutch cheese as well as other European staples here, and dine in one of the many restaurants that skirt its circumference.

Like an uber-modern Venice, taking a water taxi when in Rotterdam is a must. As well as opening up the harder-to-reach tourist attractions such as the Fenix Food Factory they also give you a unique glimpse of the city from one of the best vantage points.

Don’t expect to see a cocktail list in Stirr. The bartenders that work the impressive bar space prefer to cater your preferences, quizzing their patrons on what sort of ingredients they enjoy before concocting a bespoke drink that is sure to hit all the right notes.

Offering an unrivalled views of the city, Euromast is a great place to visit if you want to drink in all the city has to offer in one foul swoop. The observation tower also houses a bar, restaurant and hotel for those feeling particularly adventurous.

A must-see for all visitors to the city, these quirky houses immediately catch the eye as you tilt your head in several directions to get the best view. Tilted at a 45 degree angle and rested upon a hexagon-shaped pylon the houses are designed to offer a better distribution of the rooms inside, and are fascinating to look at.

Just pipping Weena for the “best name for a city district ever”, Cool incorporates many of the central aspects of the city, including the best shops and the city hall which often plays host to events and gatherings.

Touted as a Shoreditch-On-Sea, the Fenix Food Factory houses everything “craft” and “artisan” that the city has to offer, with a collection of bars, cafes and eateries that will give you a quirky taste of what Rotterdam is all about.

One of the Netherland’s “big three” clubs, Feyenoord play at the De Kuip arena south of the river. If you don’t get a chance to catch a match then stadium tours are available throughout the week where you can get a chance to see one of the world’s greatest stadiums which has hosted many European finals, including the final of Euro 2000.

Regardless of whether you are travelling to the city by train, the Centraal Station is a must-see purely based on its architectural ingenuity. The (relatively) newly-opened building marks the onset of Rotterdam’s ‘cultural axis’ by pointing the way to the city’s heart.

Another similarly impressive architectural feat, the Erasmus Bridge connects the north and south parts of the city is quite spectacular fashion. The 802-metre-long bridge across the New Meuse was designed by Ben van Berkel and completed in 1996. The cable-stayed bridge section has a single 139-metre-high asymmetrical pale blue pylon with a prominent horizontal base, earning the bridge its nickname “The Swan”.

For direct train tickets to Rotterdam, visit Loco2.com, the only search and booking platform where train travel across the UK and Europe can be booked without any booking fees in one simple transaction