Our Greek fave crashes into Norse mythology - son in tow.

Somewhere on his journey from the blood-spattered steps of Mount Olympus to the open waters of Norse mythology, our protagonist Kratos must have wrenched a heart from one of his godly victims – as well as their head. God of War isn’t a reboot of the storied series, narratively at least, picking up with Kratos an undisclosed number of years on from his bloody campaign of vengeance against Zeus, in which he all but obliterated the pantheon of Greek gods. Older, colder, and with a new sprout of chin scruff, Kratos is building a funeral pyre for Faye, his recently deceased wife, as his bow wielding son, Atreus, watches on. Faye’s death is the event which drives the story forward as father and son embark on their quest to enact her final wish: scattering her ashes at the peak of the land’s tallest mountain. Of course, it isn’t long before events spiral out of hand.

It’s an emotive opening, and the first thing you will notice about God of War is its shift in tone from the original series. This is a mature game which doesn’t shy away from its core theme of loss, and the relationship between Kratos and Atreus becomes a surprisingly nuanced exploration of parenthood. It takes a while to adjust to this tone but the writing helps. While he may seem initially po-faced, especially to gamers familiar with his usual fury, our scowling Kratos shows emotional complexity throughout his journey. While much of the conversation between Kratos and Atreus is functional early on this soon gives way to some well observed moments of father-son wisdom and awkwardness. With this entry the Greek God of War becomes a real character to root for, evolving beyond his one-dimensional roots. Kratos is capable of believably emoting and processing complex feelings surrounding grief and his duties as a father. Who knew? 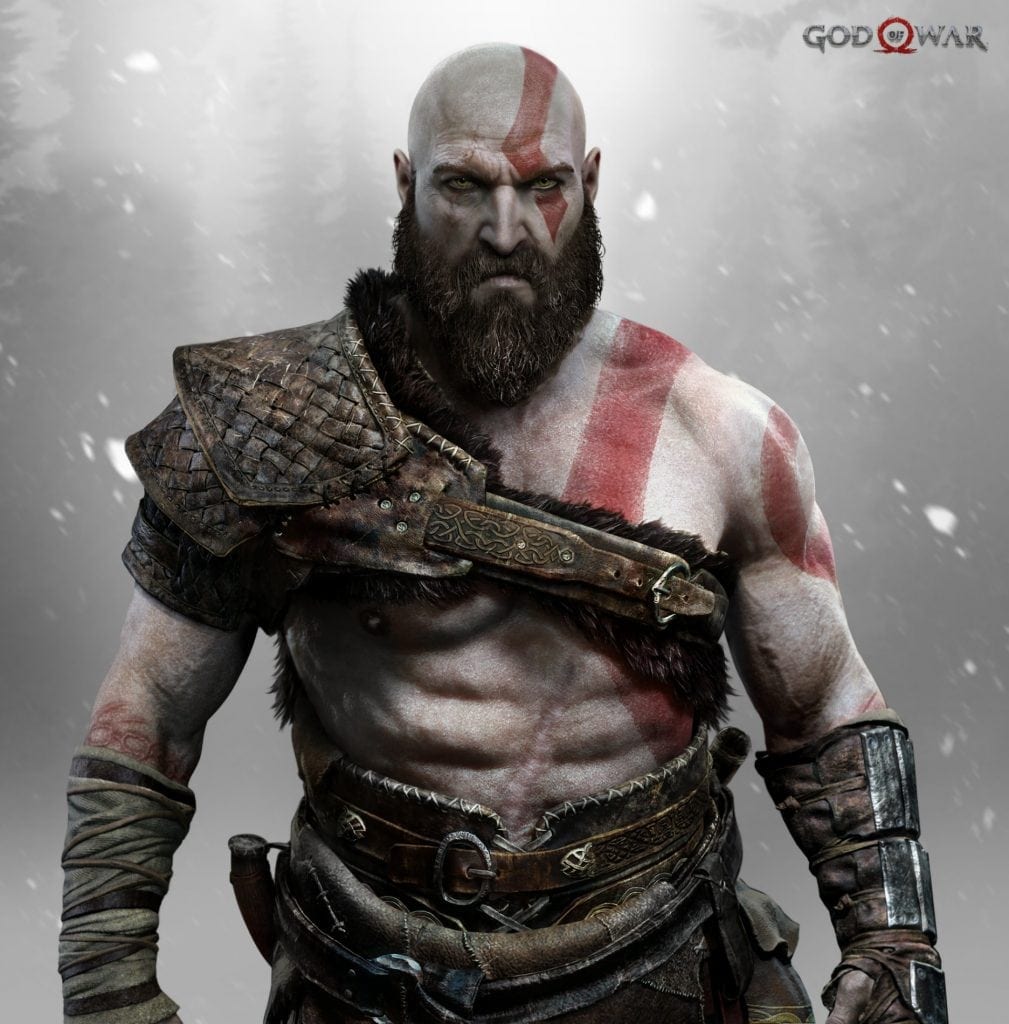 Not that he’s gone soft. This may be a radical departure from the series we were introduced to in 2005 but the bedrock of satisfying combat, puzzles and exploration are still here. Picking up with the controls and combat mechanics, button mashing has given way to an impactful and weighty control system. Cues have been taken from the Soulsborne series, and the default control setting will have light and heavy attacks mapped to R1 and R2 to reflect this. The fixed camera of the original series is gone too, scrapped in favour of a more modern third-person perspective which puts you up close to Kratos and the carnage which unfolds around him. Coming directly from a playthrough of Bloodborne prior to God of War, this control scheme felt natural to me, though Kratos is a more unwieldy character than my Yharnam Hunter, and inputs sometimes felt floaty.

However, unlike the obtuse engagements of the Soulsborne series, God of War quickly reveals its options to you, giving the player a wider breadth of violent expression. A few hours into the game you will have had the chance to master some meaty combos, using close and ranged combat in a dance of melee inputs, utilising Atreus as a distraction or stun-builder, and popping your Rage meter when encounters become overwhelming. It takes a while for it all to flow but when you find your rhythm engagements become a deadly dance. And decapitating a draugr and rending its friends to pieces with your bare hands never gets old.

The implementation of Atreus in combat situations allows for effective support when the odds are stacked against you, which they regularly are. With the tap of the square button Atreus will fire on an enemy with his bow, and his abilities can be upgraded to build out his hand to hand abilities and bow modifications. Though his enthusiasm in combat can make for some jarring story moments. The game will occasionally lurch from an emotionally impactful cutscene straight into a moment of joyous bloodlust without a buffer to let the implications of the story breathe. It’s odd to have Atreus chiding his father about his apparent lack of grief in one moment, only to have him loosing arrows and scaling a thrashing enemy with abandon in the next.

The skill tree is deep and worth exploring in the way proper RPG development should be, and when he’s locked into a combat situation Kratos moves through this world with focused aggression. The iconic Blades of Chaos have been swapped out for the lore-appropriate Leviathan Axe, which necessitates getting closer to your enemy given its short range, and timing attacks to make the most of your heavy swings. Ranged efforts are handled by Atreus, who fires his bow at your command, as well as your own Leviathan Axe which can be thrown at distant foes and returned to your hand, Mjölnir-style, with a single button press. It’s a simple mechanic which begins to show its versatility as combat situations and puzzles evolve. The first time you strike multiple foes with the outward throw, only to finish the crowd of draugr off as the axe returns to your open palm, washes all memories of the Blades of Chaos away.

It is also easy to forget how fiendish the puzzles of the original series could be. Solving Pandora’s Box and the hours it took rotating the stages, battling enemies and triggering traps in the first God of War is one of my most enduring gaming memories, as are the challenges of the titans and the fates in God of War 2. The latest entry sticks to this tradition. Throughout the game you will encounter rune chests and environmental teasers which must be solved to get at the goods inside, and this is where your ranged combat skills will be tested. Yes, as with most things in Kratos’ life, the solution to these puzzles is often brute force, a timely axe hurl and some reactionary positioning, but this doesn’t detract from the gratification of finally cracking open some of the more inventive chests. 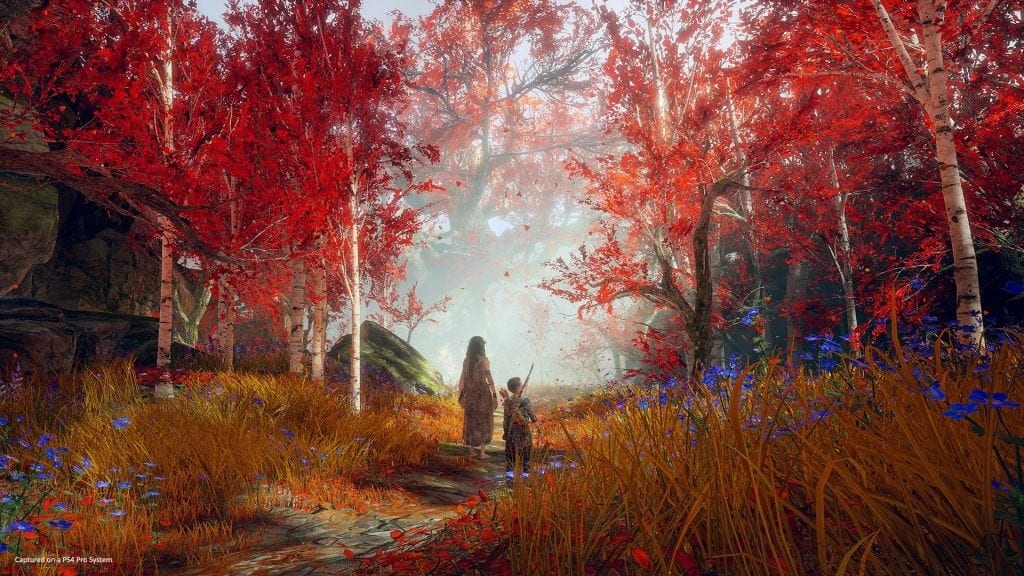 As for the presentation, God of War is a technical and artistic benchmark. Kratos inhabits an expressive character model, and remains a character who oozes power and personality from his design. This is lucky, as you will spend the entirety of your adventure looking over his shoulder, which gives you plenty of time to study the meticulous attention to detail. It was several hours into the game before I noticed the inclusion of the huge scar left by the blade of Olympus in God of War 2, carved across his chest and back, and I was immediately reminded of Kratos’ history as a character. There are also subtle callbacks to the original series in the way he animates. I had to allow myself a moment of nostalgic joy the first time Kratos climbed a chain in his typical hand over hand fashion, and despite being confined to a cutscene, seeing the Leviathan Axe biting into a cliff face to slow a sudden fall gave me just the right reverence for my many hours scaling the walls of God of War 2.

From the moment to moment gameplay in God of War’s open world to its systems in-menu, this may be a deeper experience than many fans were expecting, given the linear style of the previous entries. This is safely a 30 to 40-hour game, and if you stop to take everything in including the many side quests and optional bosses, your play time could run even longer. This is a game which respects your dedication, too. From its hack-and-slash roots, God of War has reinvented itself as a nuanced and mature character study, as well as a bombastic adventure which can go toe-to-toe, mechanically and narratively, with some of the best in gaming. This latest entry retains the scale, the addictive playability and the pedigree of presentation of the original series, but builds upon the formula with a fascinating new world to explore and an intriguing story which makes an emotive, modern, three-dimensional protagonist out of a character who was once pure melodrama.