DroneShield has developed a software similar to "Google Maps" for drones that instantly locates any drones - and sends them back to their pilots.

by Ben Cusack
in Tech & Auto 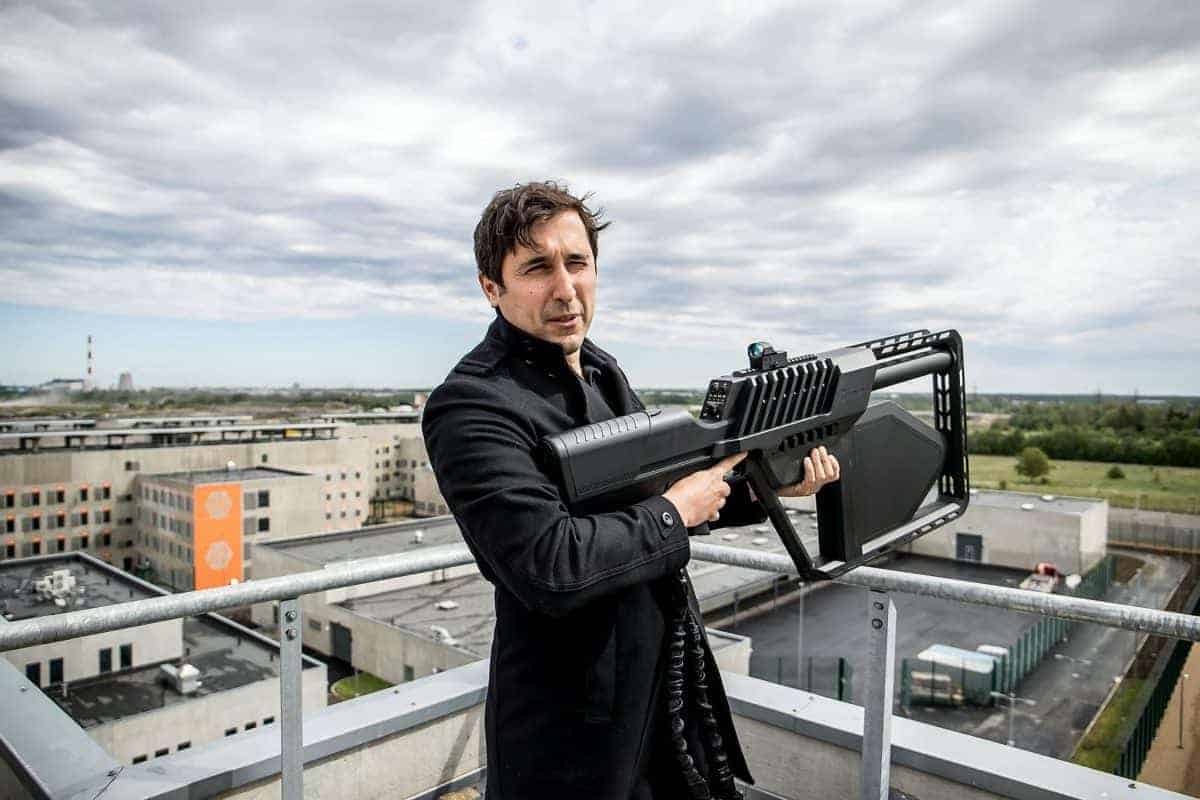 A defence company has invented new futuristic ‘rifle’ that stops rogue drones by hacking into them – and forcing them to fly back to their pilots.

DroneShield has developed a software similar to “Google Maps” for drones that instantly locates any drones – and sends them back to their pilots.

The firm has previously worked with the British Army and provided assistance to the 2018 Korean Winter Olympics, and their tech is in use at airports.

CEO Oleg Vornik remains tight-lipped on the exact cost of the system, but confirmed it ranges from five to seven figures.

A portable monitor covers a designated zone and pinpoints drones while revealing where they are flown from.

DroneShield created other products such as the Gun after the booming popularity and availability of drones among the public.

The Gun is able to deactivate flying drones from more than 3000 feet by using frequencies – shot from a futuristic-looking black rifle.

When asked about the use of the new software in situations like the Gatwick drone incident, Oleg said: “That was our idea.

“It works a bit like Google Maps, showing us a picture of an area and an accurate identification of the drone pilot’s location.

“The system can detect when a pilot communicates with a drone by accessing the ‘uplinks’ and corresponding ‘downlinks’.

“The location of the pilot can be found and they can be arrested, it would save a lot of money.

“It can also watch the drone’s video feed using radio frequency detection sensors – there is nothing on the market like this.”

Oleg’s new system has been hailed as the “first of its kind” for its added ability to return a drone safely to its point of origin.

He said: “The system is completely passive, it emits no frequency and can be safely used in airports despite the use of ‘jammers’.

“We are active in UK, but I can’t share additional details due to confidentiality, but we previously announced trials with UK Army.”

A company spokesman said: “The browser-based monitoring application lets you view and control DroneShield detection and response activity from anywhere.

“While secure cloud-based processing allows operators to access their sites from anywhere, anytime.

“The Live Dashboard allows operators to observe and understand the drone activity around their site immediately.

“Vast amounts of environmental data is processed and distributed to the operator only when required, in a form that is easy to understand.

“Detection, disruption and exclusion zones can be set up within allowing the user to establish accurate protection of their facility.”

Defence expert Will Geddes, of International Corporate Protection, warned of a “false sense of security”.

He said: “We would not want people to get a false sense of security – there is a range of drone threats – the big question is the response time after the pilot is identified.

“Those using rogue drones range from stupid clowns, to organised criminals and then terrorists at the sharp end.

“Some drones are actively designed to stop users flying into specific areas but these can be re-engineered.

“However there are some racing drones used that are incredibly quick.

“This is the first I’ve heard of this system, if a vector could be established this is pretty phenomenal, especially if the pilot was unaware.”