by Laura Elvin
in Automotive 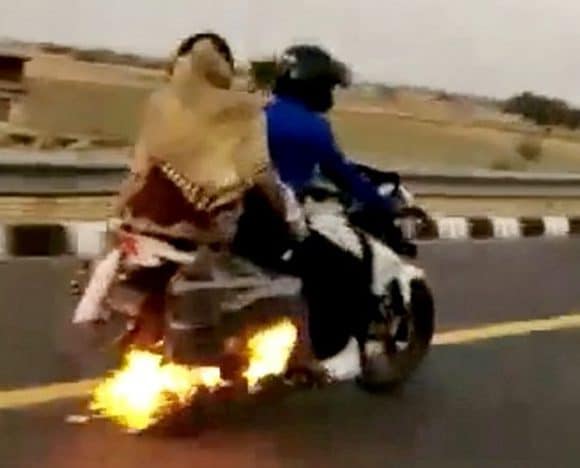 This shocking footage captures the moment a police saved a motorbike rider and his family as they drove down a highway – unaware that their bike was on FIRE.

The biker was cruising down the three-line highway with his wife and toddler riding pillion, oblivious to the fact that the rear of the machine was was ablaze.

Footage, captured by an overtaking police Jeep, sees an officer shouting for the biker to pull over, before driving ahead and pulling up in front of the bike.

Flames were billowing out just inches from his wife’s feet – as she sat on the back of the bike, not wearing a helmet, and holding onto their child.

Police officers leapt from their vehicle and rushed to put out the fire, as the biker ushers wife and child away from the motorcycle.

The police are heard yelling: “Get away from the bike, it may explode”, as they work to put the fire out on the Agra-Lucknow expressway in Utter Pradesh, northern India.

The police later warned the biker to be aware. The biker thanked the cops and said: “I didn’t know about the fire as it was underneath and it was a busy highway.”

One of the patrolling cops said, “The fire was spreading out due to the speeding bike as the biker was speeding on a busy highway.”

“The fire could have spread further leading the engines to explode or the saree of the woman could have caught the fire leading to a serious accident.”

The fire was later put out and the biker continued with his journey.