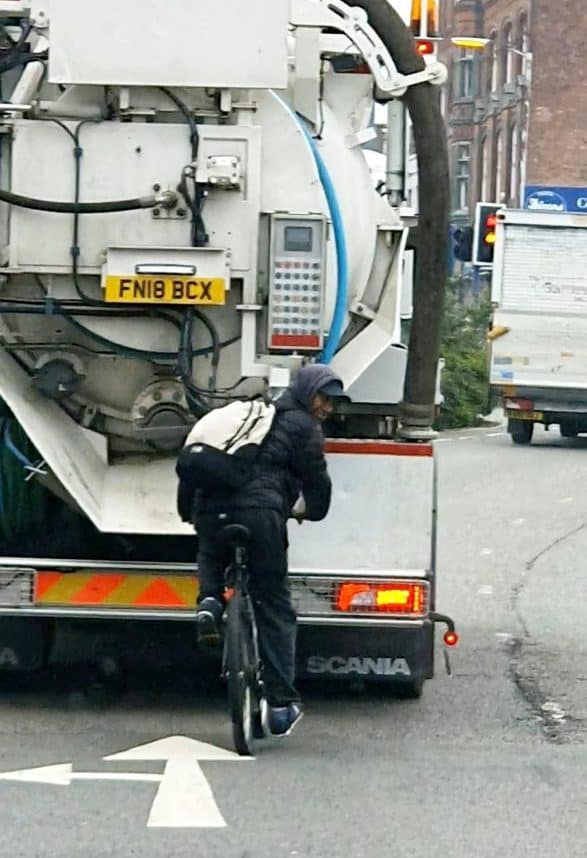 This is the dangerous moment a cheeky cyclist hitched a lift by clinging to the back of a moving LORRY — down a busy dual carriageway.

Passenger Garry Faulkner, 48, spotted the cyclist grabbing hold of the back of the sewage works truck while he was travelling down the A41 in Wolverhampton.

The shocking clip shows the daft biker being dragged down the road for several minutes, and Garry said he reached speeds of 35mph and hitched a ride for around a mile.

At one point the hooded cyclist comes dangerously close to sliding into the tram tracks on the road, and even appears to smile at the camera when he realises he has been spotted.

Senior nurse practitioner Garry, said: “He pulled directly in front of the van I was in at the lights and we thought it looked strange.

“We then saw him grab a handle on the back of the truck and off they went.

“He was travelling around 35 mph for about a mile-ish.

“It was very dangerous, especially as he was riding along the city tram lines.

“His wheel nearly drops in the tram line towards the end of the video.

“He was laughing as he saw us filming and seems quite a cheeky character.

“Apparently he’s been seen doing it before on that road.”

The clip was filmed at around 4pm on Monday (April 8).