Helen Dryden, 25, says she got so drunk with friends in London she accidentally ordered a taxi to Newcastle - before falling asleep and waking up 150 miles from home

A drunk woman in London was left with a £300 bill after forgetting to change her home Uber setting – and ordering a cab to Newcastle.

Tipsy Helen Dryden, 25, had enjoyed a boozy day with friends in the capital when she used her app to hail a cab – which she wanted to take her to her house in Guildford.

But Helen forgot that her home Uber setting was an address in Newcastle – where she went to university.

She then fell asleep in the back of the cab and when she woke up an hour later she was 60 miles north – in Milton Keynes.

Red-faced Helen explained her mistake and the cabbie did a U-turn and took her 75 miles back.

The whole trip ending up costing her £275.

Helen said: “I couldn’t believe it. The whole day ended up costing me about £400.

“I feel so embarrassed. I was a bit too drunk and just fell asleep.

I was devastated when I woke up. I feel really stupid and completely ridiculous.

“I got too drunk. I’m supposed to be getting more responsible as I get older but it’s not happening so far.”

Helen had been out day drinking in trendy Shoreditch with two friends and admits she got a little bit too carried away.

By the time Helen decided to make her way home at around 1am she had missed her last train home.

Her only option – other than shelling out well over £100 for a hotel room – was to order an Uber for the 30 mile trip to Guildford for £80.

But in her drunken state Helen accidentally requested to be taken to Newcastle when ordering online.

Helen is a former Newcastle University student and has an old address still logged in her account.

She says when she first got in the cab she was too drunk to properly remember what was said.

Helen then fell asleep in the back of the cab and it wasn’t until the driver woke her up near Milton Keynes that she realised what had happened. 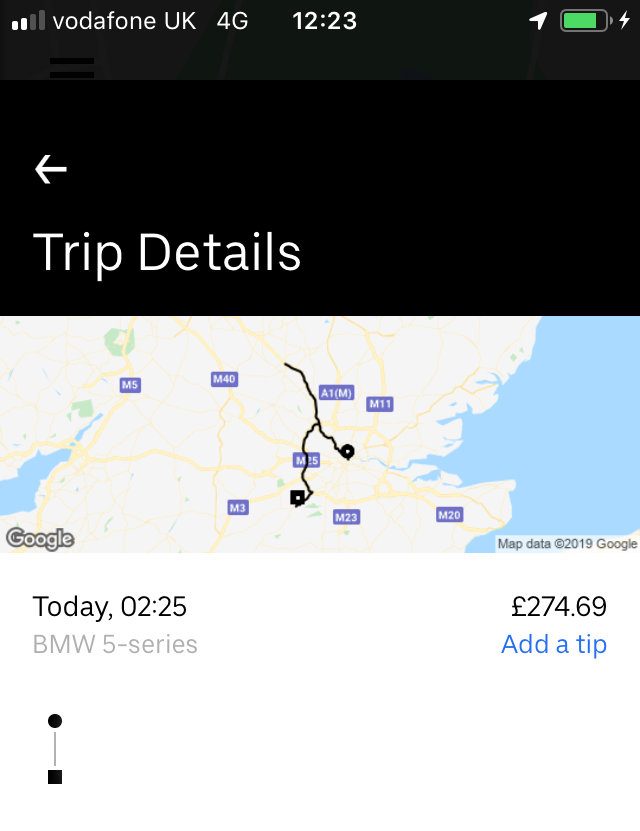 She said: “I fell asleep as soon as I got in the taxi. I woke up at Milton Keynes and I couldn’t believe it.

“I thought I said I wanted to go to Guildford when I got in. But I can’t remember what his reply was.

“He woke me up and said ‘are you sure you want to go to Newcastle?’

“I ended up getting home at about 4am.

“I take responsibility for it because I got too drunk.

“It’s the first time I’ve ever done something like this. I’m devastated by it. It’s too much money to comprehend.”

To add insult to injury, Helen says she still hasn’t paid the bill because the card she paid on has insufficient funds.

The payment will be processed on pay day at the end of the month.

This time Helen made sure she asked to be taken home – and not to somewhere else hundreds of miles away.

An Uber spokeswoman said: “We are currently looking into this issue.”