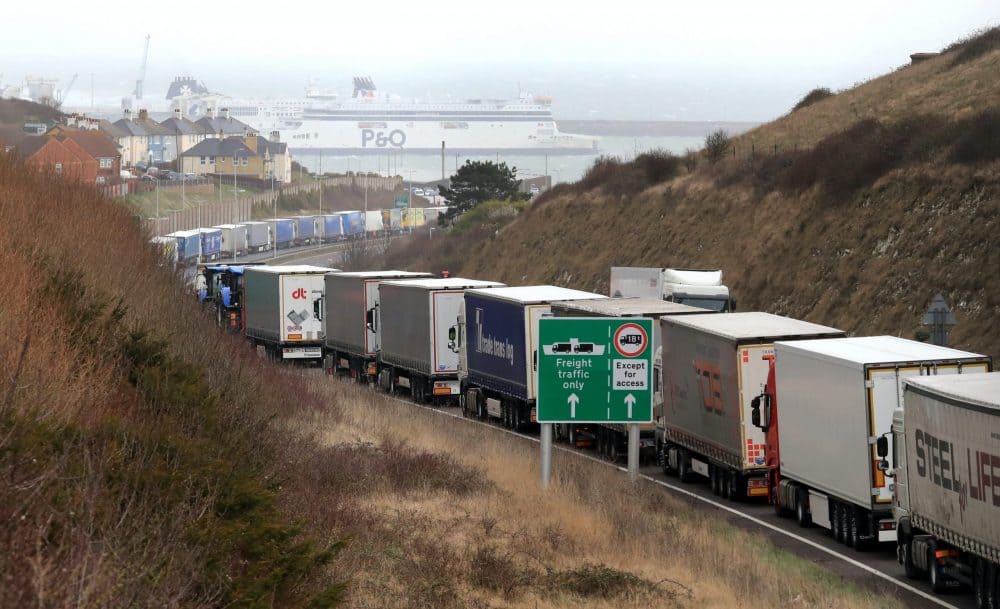 Drivers will face further M20 chaos with the return of Operation Brock to prepare for the end of the UK’s Brexit transition.

The system caused months of frustration last year after a 15-mile stretch between Junction 8 for Leeds Castle and Junction 9 for Ashford was cut into just two lanes by a steel barrier.

Now the Department for Transport is preparing to relaunch Operation Brock at the end of the year as it gears up for disruption once the Brexit transition period ends on New Year’s Eve.

One side of the busy motorway will be dedicated to HGVs heading to cross-Channel ports while the other side will be used by all other traffic restricted to a 50 mph contraflow.

This year moveable concrete blocks will be used instead of the previous metal barrier which took a month to put in and remove.

The blocks, which bosses say can be installed within hours, will be stored on the hard shoulder so highways chiefs can access them quickly when needed.

Before its relaunch in December, a temporary steel barrier will be used between September and November, reducing the London-bound stretch to just two lanes with a 50mph speed limit.

This is to ensure workers can put the concrete blocks on the hard shoulder safely and check the M20 is ready for the return of the contraflow after Christmas.

Highways chiefs will close the London-bound side overnight between 9pm and 6am from September 1 until September 11 to allow for installation of the steelwork.

It will be shut for another nine days from November 16 when contractors will remove the barrier.

Closing the road overnight means no full closures in the daytime are needed, according to Highways England.

But work to install gates on the central reservation will require some additional overnight closures of the London-bound carriageway and overnight lane closures on the coast-bound side.

During the works, the M20 coast-bound will remain open but with a 60mph speed limit restriction.

Highways England regional director Nicola Bell said the work has been “carefully planned to avoid closures during the August bank holiday and October half term.”

She added: “Road closures are always challenging and we recognise the impact this work will have on the region’s businesses and communities.

“However this new solution avoids month long closures to install the barrier.

“By closing the road overnight, we are reducing disruption during busier periods which is positive for drivers, local businesses and residents.”

Clearly signed diversion routes will be implemented when the London-bound carriageway is closed.

Traffic will be diverted from Junction 9 via the A20 to rejoin the M2 at Junction 8.

Vehicles more than 4.7m high will need to follow a far more complex route and turn around at Junction 9 to rejoin the M20 towards Dover.

Drivers will then be diverted onto the A20, then the A2, then the M2 which they will leave for the A249 to rejoin the M20 at Junction 7 and head back towards Junction 8.

Earlier this month, the government launched a consultation on Operation Brock which will see a specialist ‘zipper’ machine used this year to put the concrete blocks into place.

The consultation period runs until midnight on Sunday.