Wealdstone FC has announced that Bobby Wilkinson will be their new first team manager. Bobby has enjoyed a long period of highly successful management with Vanarama National League South rivals Hungerford Town and comes to Wealdstone with an impressive track record. Under Wilkinson the Crusaders have seen seven seasons of continued success and improvement since […]

Wealdstone FC has announced that Bobby Wilkinson will be their new first team manager.

Under Wilkinson the Crusaders have seen seven seasons of continued success and improvement since his appointment as manager in the 2009-10 season with a remarkable 70 per cent win ratio over that period.

He led the club to promotion through the Southern League South & West play-offs in 2012-13 and Hungerford then made it to Step 2 for the first time in their history after winning the Southern Premier play-offs two seasons ago. Last season, their first in the NLS, Wilkinson achieved a highly creditable 6th place only missing out on the play-offs due to ground grading requirements.

Wilkinson,40, has also added two quarter final placings in the FA Trophy to his list of achievements with Hungerford. With team spirit and togetherness always a top priority for him, Bobby has had players sign for Oxford United, Bristol City and Bristol Rovers during his tenure.

The former Reading youth player continues to have very strong ties with the Sky Bet Championship club. Wilkinson has worked under Brendan Rodgers, Brian McDermott and Mark McGhee, and still works behind the scenes with Jaap Stam the current Royals Manager and has excellent contacts in the wider football world.

Wilkinson will be bringing in a coaching team and more will be announced in due course. 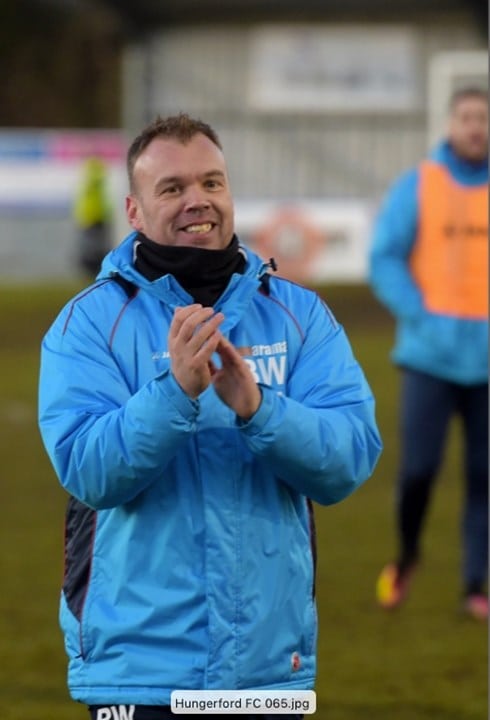 A delighted Bobby Wilkinson said: “I am incredibly excited to be coming to Wealdstone. Can I say straightaway that this is going to be about togetherness, passion and the future – all things I know the Stones fans are about. I have had a fantastic time at Hungerford but we are coming to Wealdstone to give it our all and I am looking forward to the challenges ahead and to put a smile on faces.

“I know it will take time but we need to make improvements, especially with our home form. We need to see fire and drive and we will work very hard with the lads to do this. I have met some great people at the club already and it is a great honour for me to sign a contract at this club – this is a very happy day for me.

“May I take this opportunity to pay tribute to Gordon Bartlett who has done such a fantastic job at Wealdstone over so many years. I am really pleased he is staying and I will certainly be seeking his help and advice.

“I will be holding an open training session this Thursday (24th August) and I am inviting all fans down to The Vale at 7.30pm to watch and have a chat after”

Wealdstone FC Chairman Peter Marsden said: “Once we identified a need for a new manager for Wealdstone FC the identikit person would be someone who is young, ambitious and with a track record of success. We did not want a manager coming to the end of his managerial career or a ‘name’ that knows nothing about non-league football. Throw in to the mix an understanding of what is needed to be challenging for promotion in this very highly physical league. That man is Bobby Wilkinson.

“What Bobby has done to put Hungerford a town of 6,000 on the footballing map (and I think they were desperately unlucky not to make the play-offs) is nothing short of sensational. Bobby has in the past been courted by a number of other clubs in our league and I am delighted he has pinpointed Wealdstone as a club that has the ambitions to match his own.

“Take it from me Bobby is motivation personified. He is, as our supporters will soon find out, a great communicator both with players and supporters. Myself and the rest of the Board look forward immensely to working with him.

“One of the many things Bobby brings to the table is that he is extremely well thought of by all the hierarchy at Reading Football Club a club with whom he has been connected for virtually all his footballing life (indeed a very senior member of their coaching staff rang me up today to say what a fantastic young manager Bobby is).

“Finally, I know that Bobby shares my belief that we have some excellent players at Wealdstone and while it is reasonable to assume that a couple of players will come and go it is as much a case of getting an extra 10 per cent out of our existing team.”