Arsenal, Chelsea, Liverpool, Tottenham, Manchester United, Barcelona, Newcastle… Every team has had strips football fans will always remember. And kits they’d rather forget… Ranked below are Brits’ favourite – and least favourite all time classic football shirts. After a bruising UEFA Cup Final, Arsenal have shockingly topped the worst shirt of all-time. According to 2,000 […] 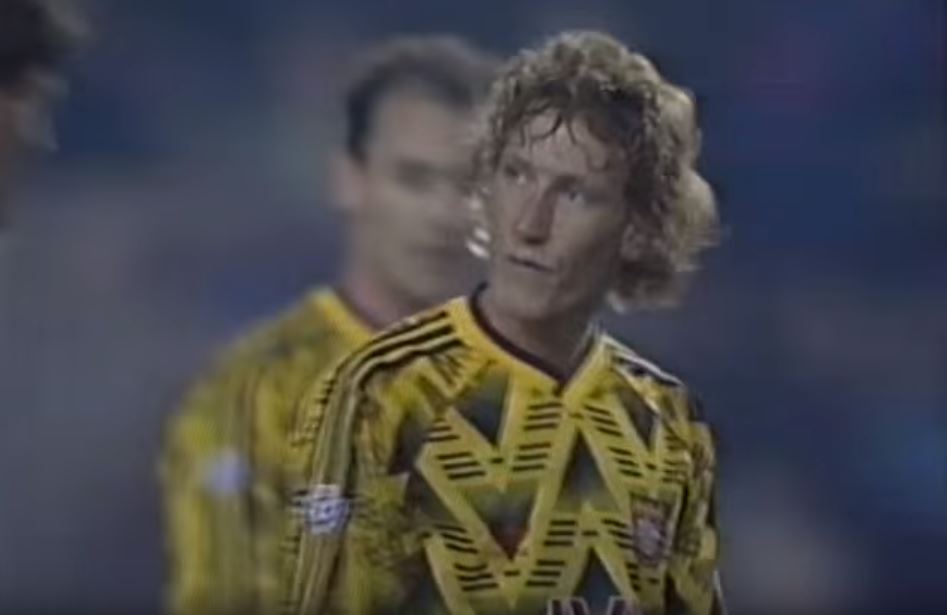 Ranked below are Brits’ favourite – and least favourite all time classic football shirts.

After a bruising UEFA Cup Final, Arsenal have shockingly topped the worst shirt of all-time. According to 2,000 football fans polled, the worst shirt ever is Arsenal’s ‘bruised banana kit’ worn from 1991 to 1993.

Which is ironic as the shirt has iconic status for Arsenal fans, and the design is rumoured to make a comeback nearly two decades on next season, with adidas taking over the North London’s team kit again and leaked photos purporting to show zig-zag stripes again.

In contrast, football fans united behind the plain red shirt worn by England’s legendary World Cup winning side to voted it the greatest football strip of all time.

The simple design, a plain red top featuring the Three Lions emblem on the left chest, was produced by Umbro – manufacturer of many of England’s most memorable shirts up until 2012.

Another shirt which divided opinion is Manchester United’s yellow and green third strip from the 1992/94 season – this shirt appears in both the best and worst lists too.

Think you know your classic football shirts? Test your knowledge with this fun quiz:

Commissioned by football betting website, FootballJunkie.co.uk , the research pinpointed the 1990s as the greatest era to date for football strips.

Other celebrated shirts include AC Milan’s home shirt made by Kappa which was worn during the 1988/89 season and Newcastle United’s adidas home strip from 1995/97.

Barcelona’s home shirt from 1980s which produced by Meyba also made the top 20.

Remarkably given the shelf-life of today’s kits, it was worn by the Catalans from 1980 to 1989 with notable players from that era including Diego Maradona, Gary Lineker and Bernd Schuster.

The 1986 Argentina home shirt made by Le Coq Sportif featured too – it’s memorable not only because it was also worn by Maradona but because his side won the World Cup that year.

As did the adidas home shirt worn by the team which knocked them out and won that very tournament – West Germany.

The 1985-87 home strip worn by North London rivals, Tottenham, and produced by Hummel made the cut too.

However not every shirt is quite so well regarded as these – there are countless strips which are remembered for all the wrong reasons.

Cameroon’s infamous onesie strip from 2004 is among them, as is Colorado Caribous’ home shirt from 1978 which featured Wild West inspired tassels.

Chelsea’s grey and orange number from the 1994/95 season is also considered to be one of the worst kits – as is Manchester United’s notorious grey strip worn during 1995/96.

That particular shirt was so disliked by their then manager, Sir Alex Ferguson, that half-way through their 3-1 defeat to Southampton he insisted they change their kit.

This was the last time they ever wore it.

A spokesman for FootballJunkie said: “The research suggests sentiment plays a big part when it comes to deciding which shirts are the best.

“Shirts worn by unsuccessful sides are perhaps unfairly forgotten, despite being fantastic designs – the 2009/10 England strip springs to mind.

“It’s also clear from the research that fans can be divided when it comes to choosing shirts that are worth celebrating– the yellow Arsenal kit is a great example.”

Four in 10 buy their side’s new shirt every time a new one is released and six in 10 admit they actively look forward to the release of their team’s shiny new kit.

Further to this, 37 per cent believe football shirts are now a staple fashion item – clothing which can make you stand out from the crowd.

Perhaps with this in mind 43 per cent of football followers own original vintage shirts or reproductions of iconic shirts.

While 13 per cent feel so passionate about replica shirts they have even designed their own concept kits.

A spokesman for FootballJunkie added: “Leicester’s Admiral pioneered the replica shirt market in the 1970s, and ever since then millions and millions of football tops have been sold across the world.

“There are many iconic shirts which are remembered decades later, and lots of great designs which narrowly missed out on the top 20.

“As such, football fans will have their own opinions on which shirts should or shouldn’t appear in either list, but there’s no doubt they are part and parcel of the beautiful game.”