Former Liverpool star Jamie Carragher says the Scottish accent has helped Scots managers become the best in the world. Jamie, 41, says the Scots accent helped the likes of Alex Ferguson and Bill Shankly achieve their massive success. Jamie was speaking in a podcast with Alistair Campbell, the ex-Downing Street Press Secretary, and his daughter […] 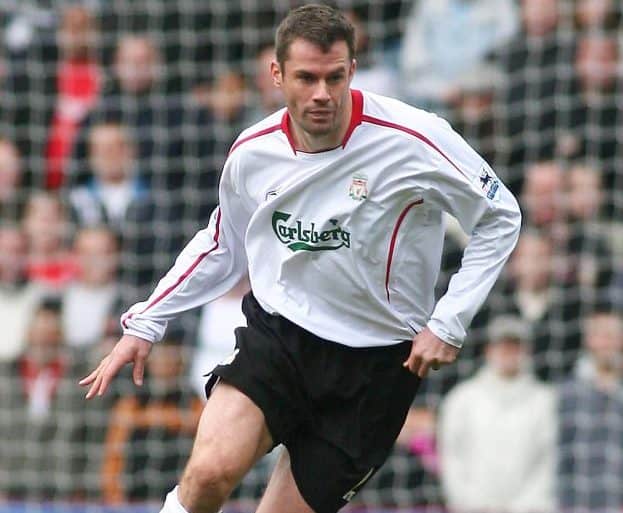 Jamie was speaking in a podcast with Alistair Campbell, the ex-Downing Street Press Secretary, and his daughter Grace, a comedian and activist.

The podcast, titled Football, Feminism and Everything in Between, is available tomorrow (Weds)

Jamie said: “I think there is something special about the Scottish voice, I’ve always believed it.

“I don’t think it is any coincidence that probably the greatest British managers were Scottish. Busby, Ferguson, Shankly.

”And I wouldn’t say the Scots have got some knowledge of football that nobody hasn’t.

“I just think that when your in that position of power, that voice, it’s like when I listen to Graeme Souness punditry, it’s the voice, it’s the delivery.

“I think it brings people with them and just watching clips of Shankly speaking you sort of do anything he said, when he speaks and the humour in him.”

He also added in his early days he’d wear a Scottish footie top to training.

He said: “You came in with what kit you had and the only kits I had were Everton ones and a Scotland one, would you believe, that was because Everton strikers at the time were Andy Gray and Graeme Sharp.

“So I had number nine on the back of them and when I first joined, Kenny Dalglish’s son used to train with us, Kenny was the manager and his son Paul, so he took a liking to me, I stood out, I was one of the better players in the group and from that day on I was called Sharpie because of the Scotland and Everton shirts.

“So Kenny Dalglish, the biggest legend ever at Liverpool still calls me Graeme Sharp.”

Jamie said his spitting shame will ”haunt me for the rest of my life”- and says he didn’t go into management because it left his managers ‘broken and paranoid’.

He also said if Boris Johnson becomes Prime Minister he’d be unable to visit the city – because of his previous comments about Hillsborough.

Jamie said: “The two biggest managers for me in my career were Gerard Houllier for six years and Rafa Benitez for six years.

“You know they’re just not the same person, and I just think it’s what the job does to them.

“I think a lot of managers become bitter, and then they get the love for the game, they go back into being a manager, have a year or two out, but towards the end when things aren’t going well you just see a bitterness.

“I was a very intense player, and football can take you to places but it can also take you to dark places.”

Jamie also says he only got through the aftermath of his spitting shame thanks to his wife.

He said: “We [family] were devastated by it really, you go back and think the aftermath of it, you do interviews and apologising, and I had to come back to my family that day, sometimes you think back and think how did you get through it.

“We are in a privileged position more often than not we are high profile which means you earn a lot of money and anyone who tells you it’s not a great life is telling lies.

“A guy was trying to get a funny video of me, and it’s not the first time and it won’t be the last time.

“I’ve never reacted like that before, I had come out and I was just driving along and I actually thought it was a Liverpool fan.

“So I put my window down as if to say hiya mate you ok, and then I get a little bit of abuse and listen it wasn’t nothing major, he was just a normal fan gloating about the win.

“It carried on about two or three times and I just snapped, can’t explain why I did it, if I could take that back, it will probably haunt me for the rest of my life.

“It’s probably taken me six to 12 months to get over it in some ways.

“I got great support at the time, I was very lucky with that.

“I spoke to the guy involved a couple of days later and I think they regretted it, the whole thing, they started getting a bit of abuse when it was in the press.

“The thing that absolutely kills me is the bit about his daughter, and this thing that I spat at a girl, it just kills me.

“I didn’t see who was in the passenger seat and I just lost my head.

“As soon as I got home I told my wife, I knew straight away, I just thought oh my god, my wife was unbelievable for me.”

He also said Boris Johnson is a ”phoney” and described Brexit as a ‘shambles’.

Jamie said: The thing that pisses me off is that, I think people have jumped on this bandwagon of Brexit, for their own, basically to become Prime Minister.