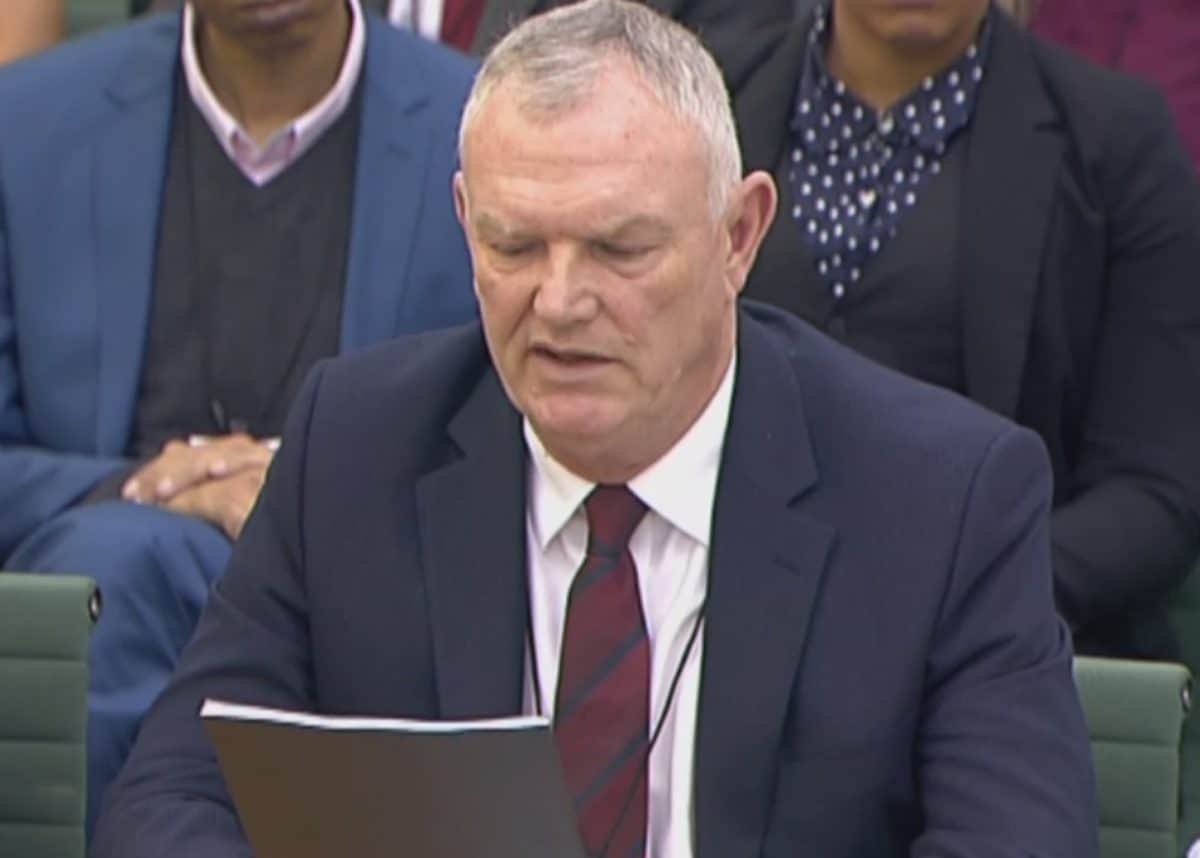 FA Chiarman Greg Clarke in front of the Digital, Culture, Media and Sport Committee at Portcullis House in Westminster, London.

The chairman of the FA, Greg Clarke, has resigned after using the phrase “coloured footballers” during a speech to MPs.

Clarke was appearing at a Department for Culture, Media and Support select committee hearing, ostensibly to discuss football’s ongoing funding and governance crisis.

Asked about the absence of prominent gay footballers by Labour MP Alex Davies-Jones, Clarke embarked on a long-winded answer that suggested concern about online abuse is stopping players coming out.

“Why would you voluntarily sign up for that kind of abuse. As soon as you put your hand up the dark corners of social media come for you.”

After an emergency FA board meeting, it was announced that Clarke, 63, would be standing down from the role he has held since 2017 with immediate effect.

“My unacceptable words in front of parliament were a disservice to our game and to those who watch, play, referee and administer it,” Clarke said in a statement on Tuesday evening.

“This has crystallised my resolve to move on. I am deeply saddened that I have offended those diverse communities in football that I and others worked so hard to include.

“I would like to thank my friends and colleagues in the game for the wisdom and counsel they have shared over the years and resign from the FA with immediate effect.”

The FA said: “Peter McCormick will step into the role as interim FA chairman with immediate effect and the FA Board will begin the process of identifying and appointing a new chair in due course.”

Davies-Jones said Clarke’s comment was “abhorrent”. Writing on Twitter after the hearing, she said: “It speaks volumes about the urgent progress that needs to made in terms of leadership on equalities issues in sport. I can’t believe we’re *still* here in 2020.”

Her shock was echoed across the game. Sanjay Bhandari, the chief executive of anti-racist organisation Kick it Out, said: “His use of outdated language to describe black and Asian people as ‘coloured’ is from decades ago and should remain consigned to the dustbin of history.”

Elsewhere in the session, Clarke said that South Asians and Afro-Caribbean people have “different career interests”, making a heavy-handed reference to the FA’s IT department.

“BAME communities are not an amorphous mass,” he said. “If you look at top level football the Afro-Caribbean community is overrepresented compared to the South Asian community. If you go to the IT department of the FA there’s a lot more South Asians than there are Afro-Caribbeans. They have different career interests.

“So what we have to do is treat each individual on their merits, but make sure we are inclusive and have programmes that don’t cross the line into positive discrimination but encourage those communities to participate.”

The chair of the DCMS committee, Tory MP Julian Knight, said Clarke had been “right to apologise”. “However, this isn’t the first time that the FA has come to grief over these issues,” he added on Twitter. “It makes us question their commitment to diversity.”

Labour’s Marsha de Cordova, the shadow equalities secretary, said: “The comments made today were offensive and outdated. The FA must do much more than simply apologise – they should review all of their diversity programmes and ask whether they go far enough or fast enough.”

Clarke has previously courted controversy at DCMS hearings. In 2017, when summoned to discuss discrimination in football, he dismissed accusations of institutional racism at the FA as “fluff”.