Obama recently delivered one of the biggest speeches of his life, and one of the most damning criticisms of Donald Trump to date. After eight years of being heckled by “The Donald” and his fellow conspiracy theorists, this one was personal. Around 45 minutes he spelt it out with these bold words: “That’s why anyone who threatens our values, […]

Obama recently delivered one of the biggest speeches of his life, and one of the most damning criticisms of Donald Trump to date. After eight years of being heckled by “The Donald” and his fellow conspiracy theorists, this one was personal. Around 45 minutes he spelt it out with these bold words:

“That’s why anyone who threatens our values, whether Fascists or Communists or jihadists or homegrown demagogues, will always fail in the end.”

This powerful sentence puts Trump shoulder to shoulder with Mussolini, Stalin, ISIS and other demagogic tyrants. The comparison is perfectly valid, especially given that Trump has been strutting around unashamedly quoting Mussolini.

"@ilduce2016: “It is better to live one day as a lion than 100 years as a sheep.” – @realDonaldTrump #MakeAmericaGreatAgain"

But while the comparisons might be accurate, the claim that they will “fail in the end” is one that rests on hope, not evidence. Within our echo chambers it’s comfortable to hear “Trump will eventually fail” rather than “Trump will probably win”. Even if he doesn’t win the election, he will have succeeded in poisoning American politics by wiping his feet on its norms and etiquette.

One of the strongest pieces of evidence pointing towards a Trump regime comes from something called the Fragile States Index, an annual report ranking the countries of the world by how vulnerable they are to conflict and collapse. The 2016 Fragile States Index ranks Somalia and South Sudan as most fragile, with Finland and Norway as least fragile. Since 2011 Syria’s ranking has plummeted from 48/177 to 6/177, while the United States has inched from 158 to 159, and the UK from 159 to 162.

J.J. Messner is one of the people involved in the Fragile States Index, and he was interviewed by C-SPAN just after the Brexit vote:

“When the Brexit referendum occurred, we went back in the data … in the United Kingdom we found that over the last five years the Group Grievance indicator [a tool for measuring tension between groups] had pretty much been the only indicator that had worsened. What we also found was that it had worsened at the same rate as it has in the United States.”

By this assessment, it looks like the United States are hurtling towards their Brexit moment – a painful realisation that the other half of the country belong to a different social tribe, and that they, after years of feeling ignored, have seized control of the status quo.

You might find people ignorant, but ignoring them is no solution. Political realities are uncomfortable because we have to share them. The Remainians stuck in Brexitopia are learning this far too late, and if Americans don’t want to see Trump in the White House, they should get away from their internet bubbles and have some uncomfortable conversations with his supporters. 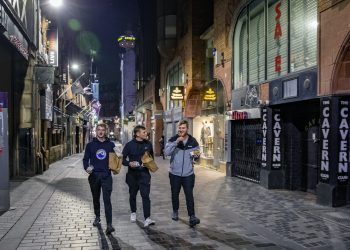