“Every single person in the vehicle during that completely unnecessary presidential ‘drive-by’ just now has to be quarantined for 14 days. They might get sick. They may die. For political theatre." 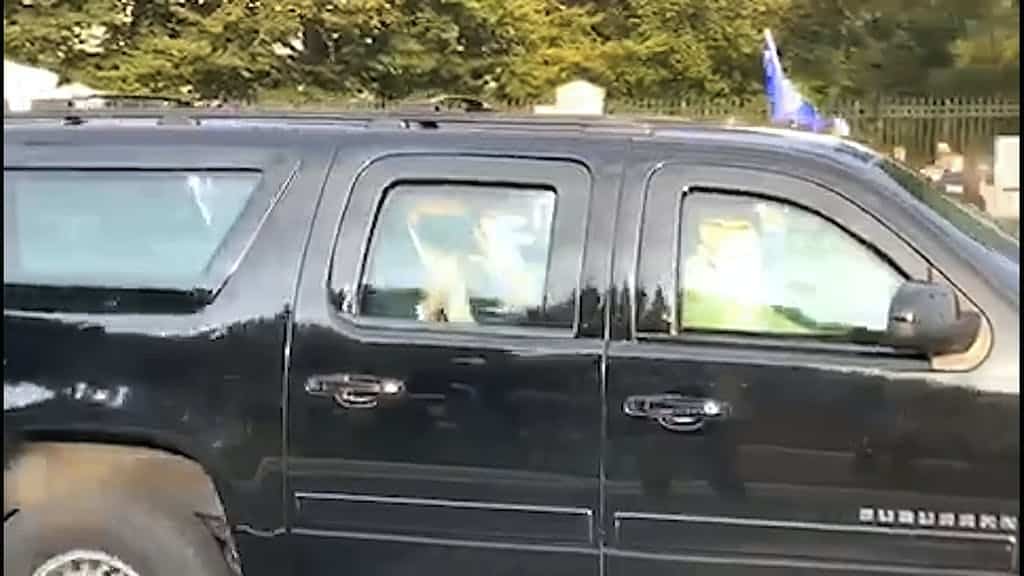 Donald Trump’s decision to briefly leave hospital to wave at well-wishers has been described as “insanity” by a Walter Reed physician.

The president’s journey came shortly after he promised his supporters “a surprise” in a video posted on Twitter.

“It’s been a very interesting journey,” Mr Trump said in the video.

“I learned a lot about COVID. I learned it by really going to school. This is the real school. This isn’t the let’s read the books school. And I get it, and I understand it. And it’s a very interesting thing.”

But at least one medical professional inside Walter Reed National Military Medical Centre, where Mr Trump has been treated since Friday evening, questioned whether he had really learned anything.

“Every single person in the vehicle during that completely unnecessary presidential ‘drive-by’ just now has to be quarantined for 14 days. They might get sick. They may die. For political theatre. Commanded by Trump to put their lives at risk for theatre. This is insanity,” Dr James P Phillips, an attending physician at Walter Reed, tweeted.

Every single person in the vehicle during that completely unnecessary Presidential “drive-by” just now has to be quarantined for 14 days. They might get sick. They may die. For political theater. Commanded by Trump to put their lives at risk for theater. This is insanity.

Trump’s beleaguered campaign team woke up to another setback on Sunday after a new national poll showed their candidate 14 points behind his challenger Joe Biden with less than a month until the election day.

The NBC/Wall Street Journal survey indicating a 53-39 per cent advantage for the Democratic party’s nominee injected urgency for Trump’s advisers already scrambling to find a strategy for the final weeks of the campaign until 3 November.

It was becoming clear that Vice-President Mike Pence, who has tested negative for coronavirus, and members of Trump’s family, once they emerge from quarantine, will assume leading roles at virtual, then in-person rallies until or unless Trump himself recovers in time to resume campaigning.

Although Trump could possibly be in denial about the reality of the situation, as his endorsement of Express polling shows:

The White House has been working to trace a flurry of new infections of close Trump aides and allies after a series of careless moves.

That day, Mr Trump gathered more than 150 people in the Rose Garden, where they mingled, hugged and shook hands — overwhelmingly without masks.

There were also several indoor receptions, where Mr Trump’s Supreme Court pick, Amy Coney Barrett, her family, senators and others spent time in the close quarters of the White House, photographs show.

Among those who attended and have now tested positive are: former New Jersey governor Chris Christie, former White House counsellor Kellyanne Conway, the president of the University of Notre Dame and at least two Republican politicians.

The president’s campaign manager, Bill Stepien, and the head of the Republican National Committee, Ronna McDaniel, have also tested positive, though they were not at the event.

Along with Dr Phillips there has been fierce reaction to the president’s latest moves to get in a car with coronavirus.

Trump risked the lives of the Secret Service personnel who were in the drive-by SUV with him. Lives risked for a publicity stunt. They will need to quarantine for 14 days, doctors say.

“God bless our president, I will die for him.”

Trump Just Exposed Secret Service to COVID to Do a Drive-By for MAGA Supporters https://t.co/WMRm1WW2Sx

i suspect this drive through is going to haunt Trump. not because he needlessly exposed a lot of people but because for someone so image conscious he looked ridiculous. a slow speed drive by by sick old man needing a boost from a small crowd of fans. not a good look.

“Where are the adults?” said one former agent.
“He’s not even pretending to care now,” said another.