Senior Tory reveals the one Labour leadership candidate they don’t want to get in.

A senior Conservative MP has revealed the one Labour leadership candidate that they do not want to get in – and it is shockingly neither of the favourites.

Speaking exclusively to The London Economic the MP, who asked to remain anonymous, said Lisa Nandy is the politician they are most scared of because she stands the best chance of reclaiming the seats lost by Labour in the December election.

Jeremy Corbyn’s party unexpectedly saw a decline of tribal loyalty in Welsh and northern England heartlands, with the so-called ‘red wall’ crumbling at the hands of Boris Johnson’s populist agenda.

Under a Rebecca Long-Bailey administration there is scant chance of those seats falling back into Labour hands, the Tory MP suggested, saying they would be toasting another ten years of Conservative rule if she got in.

They also suggested Keir Starmer’s ‘metropolitan elite’ status also would not wash with voters in these areas, signalling that Nandy is the only one who has a chance of pulling it off.

Nandy, the MP for Wigan, has won plaudits with the Labour membership early on in the contest.

She has been credited for her toughness in front of the media as well as gaining the support of influential unions such as GMB.

She could be angling to hoover up second preference votes when the contest comes to a head next month.

With supporters of Long-Bailey and Starmer unlikely to endorse either candidate as their second choice, Nandy could be viewed as a natural fit.

If no one candidate wins the first round – which looks likely at this stage – she could be set to sneak in at the back door as the other candidates go to war with each other.

Despite being a relative outsider at the start that puts her in good stead heading into the decisive stages. 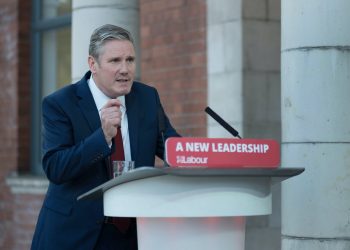