The chancellor was a founding partner of hedge-fund Theleme, a major early investor in Moderna. 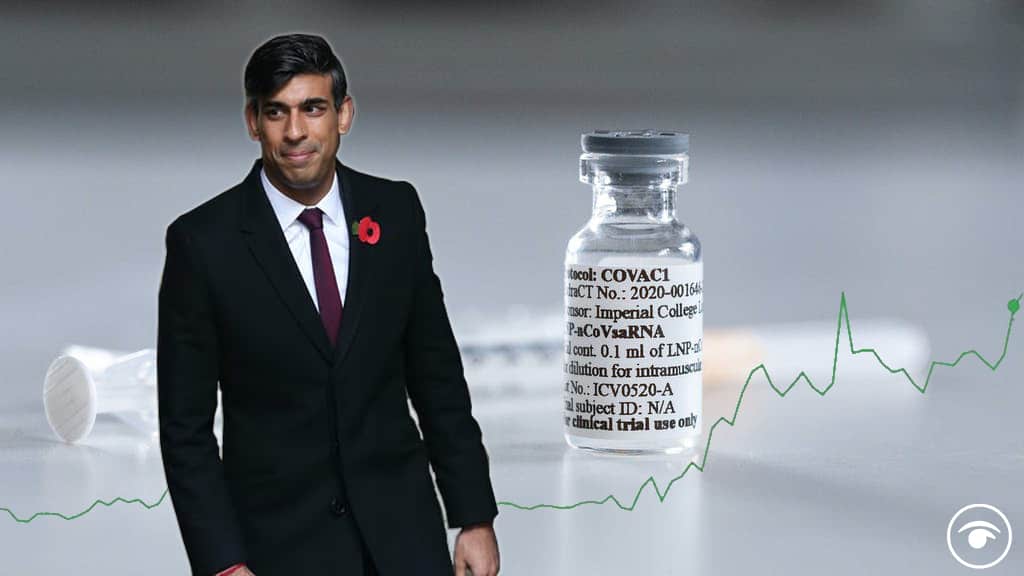 Rishi Sunak has refused to reveal whether he stands to profit from a spike in the share price of coronavirus vaccine manufacturer Moderna – one of the biggest investments held by the hedge fund he co-founded before becoming an MP.

US firm Moderna announced successful trials of its Covid-19 jab on Monday, declaring it 94.5 per cent effective and sending its share price through the roof. Its stockmarket value now stands at $39 billion.

Sunak, the chancellor, was a founding partner of Theleme Partners, a major early investor in Moderna, before leaving the firm in 2013 to pursue his political career in the UK.

It is unclear whether the chancellor – known to be one of the richest MPs – maintained any investment in the hedge fund, which is registered in the tax haven Cayman Islands, after leaving.

In a list of ministers’ interests published last year, Sunak declared that he was the beneficiary of a blind trust – the contents of which have not been disclosed.

According to stockmarket filings, Theleme has a $500 million investment in Moderna – a fifth of the total money it manages. It is reported to have invested in the biotech firm before it was listed on the Nasdaq stock exchange in 2018, when its value was over $7 billion.

The government secured five million doses of the vaccine – the best hope of ending the pandemic thus far – quickly after the news of Moderna’s successful trial results broke.

But when questioned by journalists, Sunak refused to disclose whether his investments included a stake in either Theleme’s fund or Moderna when his blind trust was created.

A Treasury spokesman told the Guardian: “The Cabinet Office has set out what are judged to be the relevant interests in the regular list of ministerial interests.”

Opposition parties and anti-corruption charities last month urged the chancellor to be “completely transparent” about what he put into the trust – amid particular concern that some funds may be held offshore.

Abena Oppong-Asare, the shadow exchequer secretary to the Treasury, said in October: “Rishi Sunak needs to be completely transparent with the public about whether any of the funds he invested in a blind trust are held in offshore tax havens. Taxpayers paying their fair share expect nothing less.”