"As Conservatives, we do not measure the depth of our compassion in two hundred and eighty characters on Twitter, but in the actions we take and the choices we make", she said. 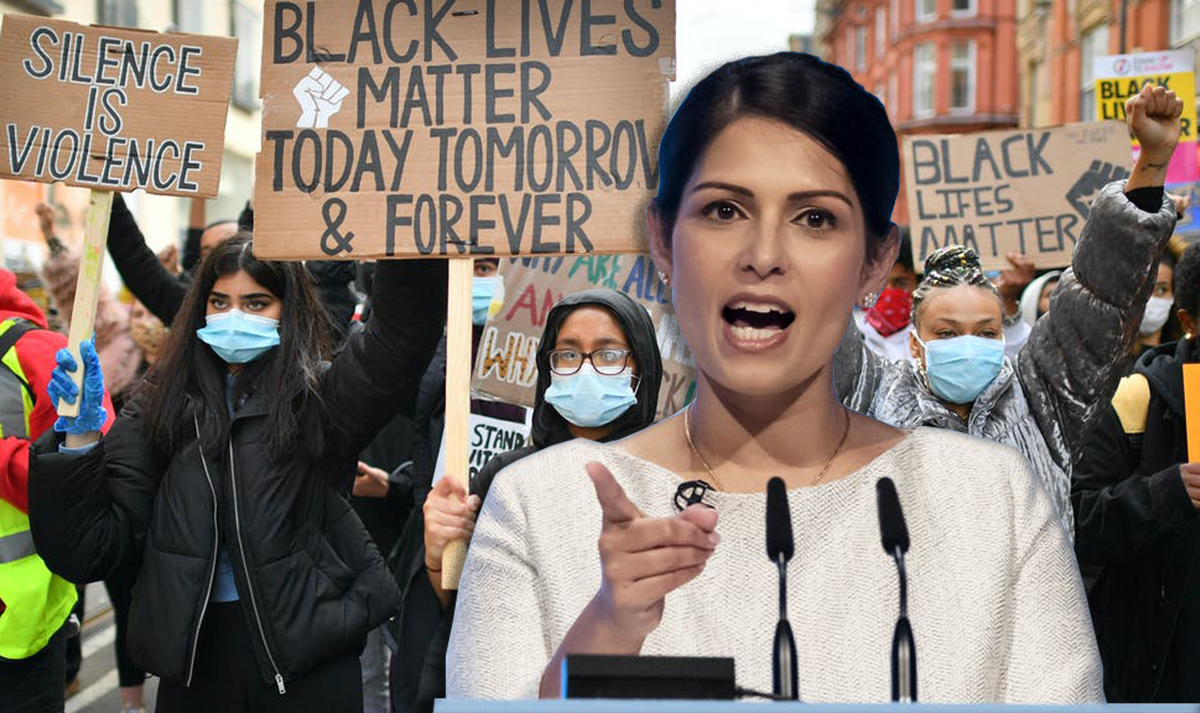 Home Secretary Priti Patel used her speech to Tory members to take aim at the tactics of Black Lives Matter and Extinction Rebellion protesters, as she criticised the “hooliganism and thuggery” seen on the country’s streets.

Social media video clips showed police in Westminster having objects hurled at them by anti-racist campaigners earlier this year, while a statue of Sir Winston Churchill had to be boarded up to protect it from vandalism during the Black Lives Matter protests.

In Bristol, those taking to the streets as part of the protests, sparked by the death of George Floyd in the US, tore down a statue of Edward Colston, who made his wealth through the slave trade.

“No excuse” for the behaviour

Ms Patel, addressing the virtual Conservative Party conference on Sunday, said there was “no excuse” for the behaviour shown.

She said police had the “backing of the Government, backing of our party, our Government and our Prime Minister” in their efforts to police the demonstrations.

She told members: “This Government will always defend the right to protest.

“That right is a fundamental pillar of our democracy, but the hooliganism and thuggery we have seen is not – it is indefensible.

“There is no excuse for pelting flares at brave police officers, for throwing bikes at police horses, for disrespecting the Cenotaph or vandalising the statue of Sir Winston Churchill, one of the greatest protectors of our freedoms who has ever lived.

“Not acceptable” for mobs to tear down statues

“It is not acceptable for mobs to tear down statues and cause criminal damage across our streets.

“And it is not acceptable for thugs to assault our police officers, just for doing their job.”

She said the Government had already agreed to double the maximum sentence for assaults on emergency workers and confirmed she was working with chief constables to ensure their officers “have the tools, support and the powers they need” to police such incidents.

Ms Patel also paid tribute to “hero” Pc Andrew Harper, who died when he became entangled in a tow rope as he tried to stop quad bike thieves, and Sergeant Matt Ratana, who was shot as he prepared to search a suspect who was handcuffed.

She vowed to work with Pc Harper’s widow, Lissie Harper, to “ensure anyone who kills an emergency worker gets the sentence they deserve”.

“Biggest overhaul of our asylum system in decades”

In an announcement briefed beforehand to the media, the Home Secretary committed to delivering “the biggest overhaul of our asylum system in decades”.

She said she would “explore all practical measures and options to deter illegal migration”.

It comes as ministers and officials faced a backlash last week over a string of reports on possible ideas for how to make changes to the asylum system, including processing those with claims on Ascension Island, some 4,000 miles from the UK, and placing them on disused ferries in the sea.

But Ms Patel said she would not be deterred from carrying out the reforms, even if that meant “being unpopular on Twitter”.

She also hit out at Alastair Campbell, New Labour’s former head of communications, who had tweeted deriding Ms Patel’s Essex accent and her penchant for dropping her Gs.

“If at times it means Tony Blair’s spin doctor mocking my accent, so be it,” she said of her bid to shake up the asylum system.

“And if at times it means Labour members of Parliament attempting to silence me because I do not conform to their idea of what an ethnic minority woman should stand for, I will stomach it.

“Because as Conservatives, we do not measure the depth of our compassion in two hundred and eighty characters on Twitter, but in the actions we take and the choices we make.”