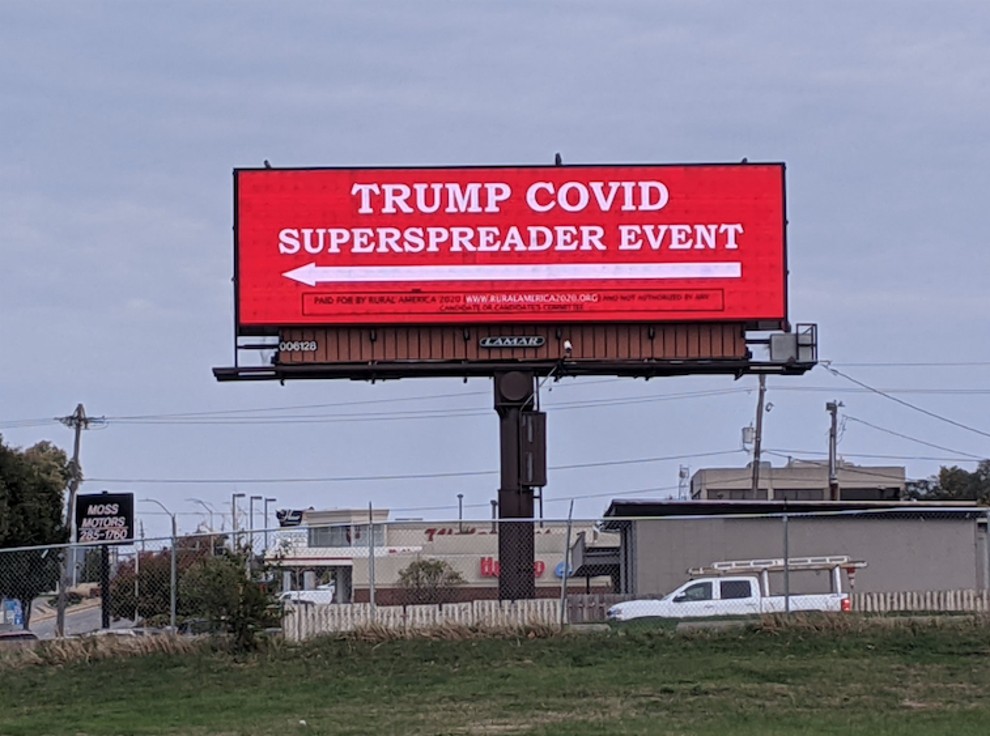 A group of local farmers in Iowa used a billboard to install a useful sign ahead of a Donald Trump rally in Des Moines.

The President has set out on a busy week of campaigning as he recovers from the coronavirus, hitting Florida, Pennsylvania, North Carolina, Georgia and Wisconsin in a bid to bolster his chances of re-election.

According to the latest forecasts Joe Biden’s lead over Trump has extended to 38 percentage points, with projections that the Democrat is on course to win 325 electoral votes to Trump’s 213.

Much of this could be down to the President’s handling of the coronavirus pandemic that has killed 215,000 Americans.

Earlier in the week thousands of people turned up to a rally in Florida without observing social distancing or wearing face coverings.

Mr Trump said he felt healthy enough to plunge into the crowd and give voters “a big fat kiss” during the event, saying: “We’re delivering a safe vaccine and a rapid recovery like no one can even believe.”

But locals in Iowa felt less assured as thousands of people turned up for a rally at Des Moines airport.

Outside a billboard directing people towards the “Trump Covid superspreader event” was installed thanks to an anti-Trump group of “farmers, agri-business professionals, former elected officials and community leaders”.

Chris Henning, a member of the steering committee, said in a press release that everyone should “be worried about a President who was in the hospital with Covid last week and who now wants to pack thousands of Iowans into an airport hangar”.

“This is the height of irresponsibility. We saw what happened in the Rose Garden. Why should the President be allowed to bring that kind of super-spreader behaviour into Iowa, particularly when our cases are rising?” he said.

Outbreaks are currently reported at 61 long-term care facilities; the highest number since the pandemic began, and a record 473 patients are in hospital with the virus, up from the previous record of 463 set on Tuesday.

We are asking for trouble

On Monday night Dr Anthony Fauci warned that holding large rallies was “asking for trouble”, pointing to a rise in cases in several midwest states, in particular Iowa.

“If anyone in attendance is infectious, we are potentially looking at another super-spreader event,” said Lina Tucker Reinders, executive director of the Iowa Public Health Association.

She told the Des Moines Register: “We again today set a record high for hospitalisations. We need to be focusing on bringing those numbers down and controlling the spread, not enabling large events, political or otherwise.”