Jeremy Corbyn quizzed Boris Johnson at PMQs about growing cancer treatment delays, asking: “how many more patients will face are life-threatening delays because our NHS is understaffed an underfunded?”

Boris Johnson has conceded NHS waiting times are “unacceptable” in the face of demands from Jeremy Corbyn for action to help patients.

The Prime Minister repeated spending pledges made by the Government before promising: “We will get those waiting lists down.”

His remarks came after Health Secretary Matt Hancock suggested the answer to record government failures to hit their four-hour A&E waiting time target could be to scrap the target.

The Royal College of Emergency Medicine warned that scrapping the four-hour target, which has not been met since July 2015, would have a “a near-catastrophic impact on patient safety”.

Official data showed in in five emergency patients were not seen within four hours in November, and there are more people than ever waiting for NHS treatment.

The Labour leader demanded Johnson to “let the British people know why after almost ten years of Tory government, patients are waiting longer for essential NHS care, whether it’s in A&Es, on waiting lists or for a GP appointment?”

Speaking at Prime Minister’s Questions, Labour leader Jeremy Corbyn said: “The number of patients waiting more than four hours in A&E is now at its highest on record for the second month in a row. We’ve had months of promises. People need action.

“There probably isn’t a family in the United Kingdom which hadn’t been affected in some way by cancer. Yet last year we saw one in four patients waiting more than two months for the start of their cancer treatment.

“How many more patients will face what are life-threatening delays because our NHS is understaffed and underfunded?”

Jeremy Corbyn then pointed out that 20,000 of the 50,000 nurses referred to by the Tory leader “already work for the NHS”.

The outgoing leader of the Labour Party then asked the Prime Minister to apologise to a 92-year-old RAF veteran in Leicester, who had to wait 12 hours on a trolley because there were no beds available. He asked the Prime Minister to apologise and to explain why “over 2,000 patients had to wait more than 12 hours before they could get into a hospital bed last month alone”.

Sidestepping an apology, Johnson answered that we all have “every sympathy for people who have a bad and unacceptable experience in the NHS. And we all share that. On the other hand most people in this country, most patients in the NHS have a fantastic experience”. 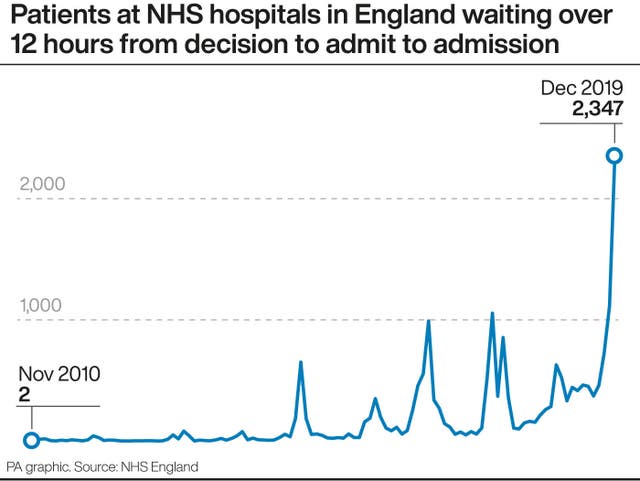 Johnson added: “The hospital he mentions is one of those which – as he knows – we are rebuilding under this programme. 40 new hospitals, 20 upgraded, under this government.”

Corbyn then reminded the House of Commons that “the problem is the Prime Minister promised 40 hospitals – in reality it was 20, then it became six”.

Jeremy Corbyn also asked “what’s the hold up” when it came to Johnson revealing the social care reform plans he insisted he had during the election.

The PM replied: “We do intend to begin with cross-party talks to build a consensus and I think there’s a growing consensus in this country on the need to tackle the issue of social care so everybody has dignity and security in their old age, nobody has to sell their home to pay for the cost of their care.

“We can do it and we will do it, with the help and co-operation of the Labour Party and other parties in this House, we will go ahead with a fantastic plan for social care.”

Corbyn told Johnson to “fund it properly” when it comes to the NHS, concluding: “The Prime Minister has said many times he’s going to put this NHS funding issue into law but all this gimmick means is even longer waiting lists, more delays for cancer patients and more A&E departments bursting at the seams while patients continue to suffer while he continues to provide excuses.

“If he’s really committed to fixing the crisis his Government has created over the last decade, he should end the empty rhetoric and back our proposals to give the NHS the funding it needs rather than putting into law an insufficiency of funding.”

Boris Johnson, on the ropes over the NHS and social care, attempted to deflect criticism by quipping that Corbyn was “still fighting on the manifesto” submitted to the public at the last election.

Are Boris Johnson’s Tories “the party of the NHS” ? Comment below with your thoughts and experiences