The president said he had found it hard to socially distance while meeting members of the armed forces, who just want to "hug you and kiss you". 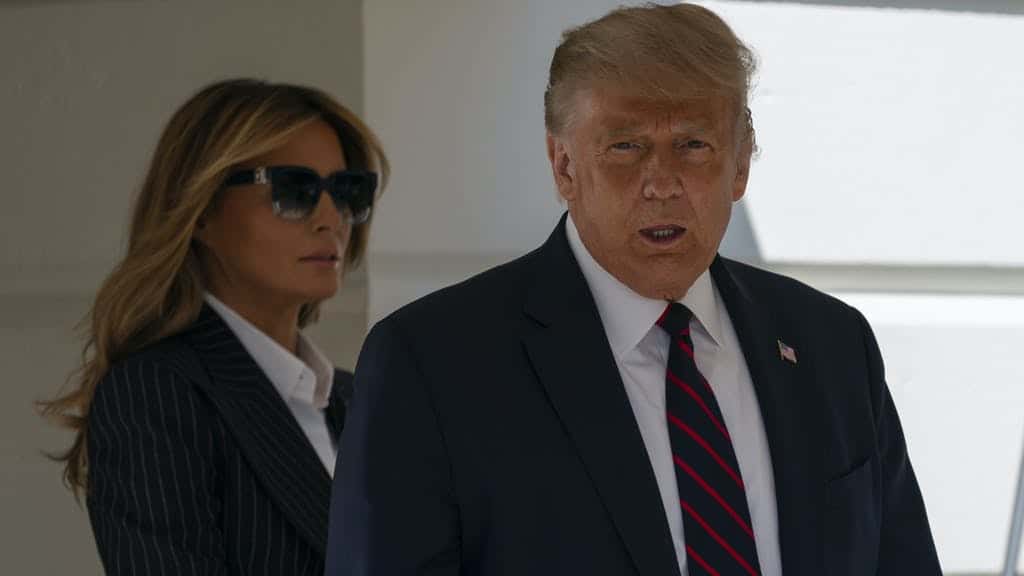 US president Donald Trump and first lady Melania have tested positive for coronavirus and are in quarantine.

Mr Trump announced his diagnosis in a tweet in the early hours of Friday, following a positive test from one of his closest aides.

Hope Hicks returned a positive test on Thursday, with Mr Trump later tweeting: “@FLOTUS and I tested positive for COVID-19. We will begin our quarantine and recovery process immediately. We will get through this TOGETHER!”

While waiting for the results of his test following Ms Hicks’ diagnosis, Mr Trump said he had found it difficult to socially distance while meeting members of the armed forces.

Tonight, @FLOTUS and I tested positive for COVID-19. We will begin our quarantine and recovery process immediately. We will get through this TOGETHER!

Hug and kiss you

“And when they come over to you it’s very hard to say ‘stay back, stay back’ you know, it’s a tough kind of a situation, it’s a terrible thing.”

His Covid-19 diagnosis is the latest among world leaders, with Prime Minister Boris Johnson admitted to intensive care after contracting the disease and the EU’s chief Brexit negotiator Michel Barnier also falling ill.

Trump is at higher risk of hospital admission and death from Covid-19 due to his age, gender and weight.

Meanwhile in the UK, new local lockdowns will be imposed in the north of England as travellers arriving from Turkey and Poland are to be told to enter quarantine to combat a resurgence in coronavirus.

More than a third of the UK will be under heightened restrictions when Liverpool, Warrington, Hartlepool and Middlesbrough enter local lockdowns on Saturday.

Holidaymakers began cancelling their plans after Transport Secretary Grant Shapps announced on Thursday that more countries will be removed from the quarantine exemption list.

Those returning from Turkey, Poland and the Caribbean islands of Bonaire, St Eustatius and Saba will have to isolate for 14 days if they arrive after 4am on Saturday.

The developments came as SNP MP Margaret Ferrier admitted breaking self-isolation rules by travelling to Parliament after experiencing symptoms and then taking a train to Scotland having tested positive.

Her party swiftly suspended her after the disclosure but leaders Nicola Sturgeon and Ian Blackford were facing questions over what they knew and when amid anger at the MP’s actions.

Earlier in the day, Health Secretary Matt Hancock said there were “early signs” that new restrictions imposed in the past month were beginning to have an impact.

But he announced new restrictions on north-west England, similar to those imposed in the North East earlier this week.

He told MPs that action was needed with there being 268 cases per 100,000 people in Liverpool.

We do not accept these measures

It will be illegal for households to mix indoors there, as well as in Warrington, Hartlepool and Middlesbrough, from Saturday.

In Middlesbrough, independent mayor Andy Preston said: “As things stand we defy the Government and we do not accept these measures.”

But it was later clarified that he will urge people and businesses to comply with the regulations.

Local lockdowns came into force in Denbighshire, Flintshire, Conwy and Wrexham in North Wales from 6pm on Thursday.

In Northern Ireland, Londonderry and the nearby town of Strabane will face new restrictions next week, with hospitality businesses reduced to takeaway, delivery and outdoor dining.

Labour leader Sir Keir Starmer called for a “rapid review” of the local lockdown strategy and urged the Government to consider whether the 10pm curfew should remain.

Proposals being considered in Whitehall could see a simpler, three-tiered approach to local restrictions, but these have yet to be finalised.