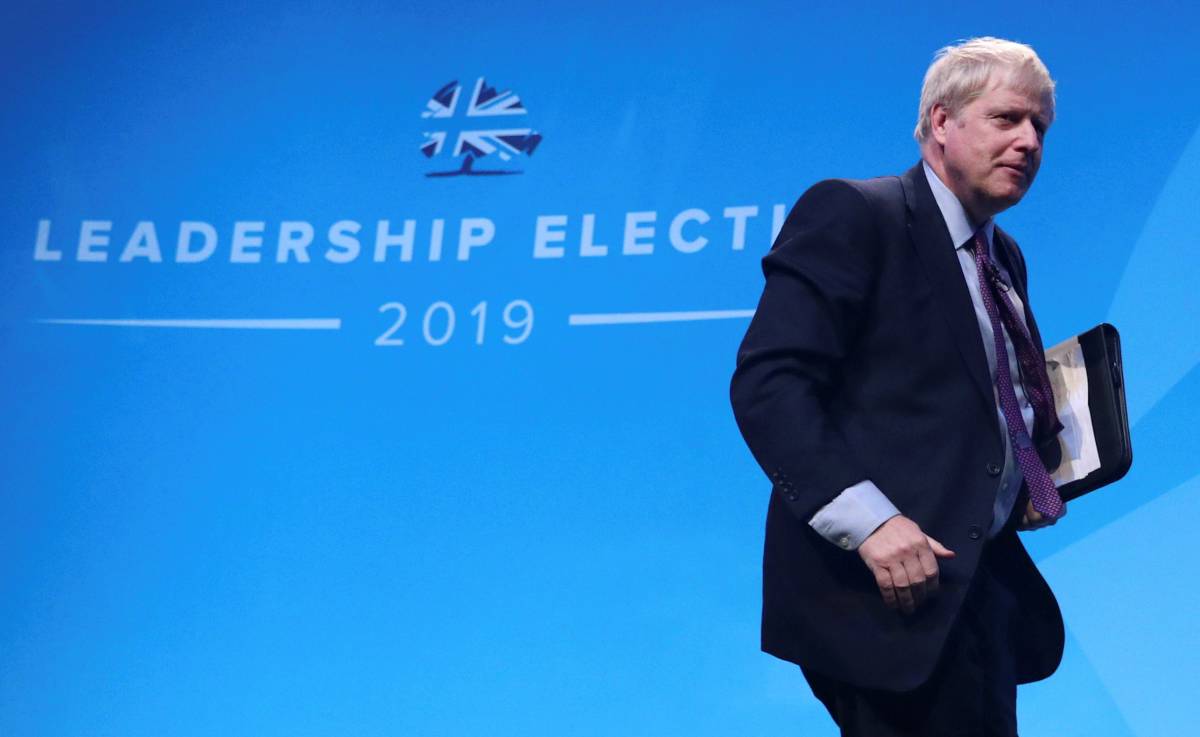 Boris Johnson, the favourite to be the next British Prime Minister, insisted this weekend that party members were not interested in why police were called to investigate concerns for the welfare of a woman in his home.

Early on Friday, British police were called to Johnson’s home after neighbours heard a loud altercation between him and his girlfriend.

More than one witness appear to have contacted the police, and The Guardian reported screams of “get off me” were witnessed.

Boris Johnson, came under renewed pressure on Sunday to explain the circumstances of a late-night row between him and girlfriend that led to the police being called to their home.

Polls conducted for the Mail on Sunday newspaper before and after Britain’s front pages were dominated by the argument showed that Johnson’s lead over rival Jeremy Hunt, the foreign minister, had evaporated amongst all voters and had narrowed among supporters of his ruling Conservative Party.

Johnson also came under fire for revelations in The Observer which suggested his connections to far-right Steve Bannon – who courted white supremacists to fuel his far right conspiracy theory-filled Breitbart website and was sacked by Donald Trump after being associated with his Muslim band and more controversial policies – may be far deeper than Johnson has previously admitted.

Johnson declined to answer questions about the domestic incident at a hustings for party members on Saturday, saying to applause that the audience wanted instead to hear about his plans for Britain three years after the country voted to leave the European Union.

Fellow Tory Brexiteer and International Trade Secretary Liam Fox, who is backing Hunt, said the reports should not distract from the policy debate in the race to become the prime minister, which will be decided by 160,000 party members next month.

“I think it’s always easier to just give an explanation,” he told the BBC’s Andrew Marr on Sunday.

“But the key thing then is how you get on to the issues; what we can’t have is it being a distraction from explanations about wider polices and where we go to and when.”

Hunt, who was campaigning in Scotland on Sunday, told Sky News that Johnson, a former foreign minister and former London mayor, “needs to show he’s prepared to answer difficult questions”.

“I think someone who wants to be prime minister should answer questions on everything,” he said.

Hunt said he was not going to comment on Johnson’s private life. “That’s for others to make their judgments on,” he said.

But he added that Johnson had to engage more in the leadership race, including taking part in more TV debates.

The clear favourite, Johnson had tried to stay out of the limelight during the campaign, and opponents have accused him of running from scrutiny to avoid the gaffes that have been a feature of his career so far.

Johnson, who has a leading Brexit campaigner in the 2016 referendum, on Saturday reiterated his desire to leave the European Union in October with or without a deal.

Hunt, who backed Remain in the referendum, said he would take the country out of the bloc without a deal on Oct. 31 if the EU had not showed it was willing to renegotiate the Brexit deal agreed with May that been rejected three times by parliament.

The EU has repeatedly said it will not renegotiate the withdrawal deal.

Polling for the Mail on Sunday showed Johnson was seen as the best prime minister by 36% of all voters on Thursday, while Jeremy Hunt was supported by 28%.

But Johnson had lost the lead on Saturday, with 32% supporting Hunt and 29% Johnson. Among Conservative voters, Johnson’s lead fell from 55% to 45%, while Hunt’s standing rose from 28% to 34%, the polls conducted by Survation showed.

Police were called to an address in south London where Johnson is living with girlfriend Carrie Symonds in the early hours of Friday after neighbours heard a loud altercation. Johnson, 55, is currently divorcing his second wife.

All occupants of the address were spoken to and were all safe and well, police said in a statement.

Supporters of Johnson have said the action of a neighbour in releasing a recording of the row to the Guardian newspaper was politically motivated.

Neighbour Tom Penn, 29, said in a statement he had called the police because he was “frightened and concerned for the welfare of those involved”.

“Once clear that no one was harmed, I contacted the Guardian, as I felt it was of important public interest,” he said. “I believe it is reasonable for someone who is likely to become our next prime minister to be held accountable for all of their words, actions and behaviours.”

Penn said voted to remain the European Union three years ago, but that was the extent of his involvement in politics.

Johnson to declined to answer questions about the incident at a hustings event in Birmingham, in central England, saying that party members would rather hear about his plans for Britain than about the incident.

“I don’t think (audience members) want to hear about that kind of thing, unless I’m wrong,” Johnson said when asked about the incident, to applause from the audience.

“I think what they want to hear is what my plans are for the country and for my party.”

Police had been called to an address in south London where Johnson is living with his girlfriend, Carrie Symonds. Johnson is currently divorcing his second wife.

“The caller was concerned for the welfare of a female neighbour,” the police said in a statement on Friday evening. “Police attended and spoke to all occupants of the address, who were all safe and well.”

“There were no offences or concerns apparent to the officers and there was no cause for police action,” the statement said.

The Observer has published a video excerpyt from a documentary on teh far right activist who has been trying to establish a netowrk of populist parties across Europe, describing how close he is to Johnson.

Bannon claimed to have advised Johnson on his resignation speech as Foreign Secretary that mocked the Eu Withdrawal deal that his government had negotiated as he tore into his party leader Theresa May.

Boris Johnson insists Britain should leave the EU in October with – or without a deal.

Boris Johnson, also insisted again this weeked that he wants Britain to leave the European Union in October with or without a deal as he avoided questions at a campaign event on Saturday about a police visit to his home.

Johnson, a leading figure in the 2016 referendum campaign to leave the European Union, had raised some doubts about his commitment to leave by the latest deadline when he described it as only “eminently feasible” in a televised debate this week.

“Eminently feasible means it’s not only that we are going to do it but that it’s possible to do it because it’s eminently feasible. Of course we can do it,” Johnson told the first of 16 leadership hustings events.

The meeting saw Johnson and his remaining rival, Foreign Secretary Jeremy Hunt, each make their pitch to Conservative Party members who will vote to choose one of them as their next leader – and thus the next prime minister.

Meanwhile Jeremy Hunt, who voted Remain in the 2016 referendum but says he would now vote for Brexit, has said that he will not make promises he cannot keep on Brexit or spending.

He has said that committing to the October deadline risks a move by lawmakers to block a possible no-deal, which could lead to an election, and has indicated he would delay Brexit again if he felt a deal was in reach.

However, he told party members on Saturday that he would take Britain out of the European Union without a deal on Oct. 31 if the EU had not moved towards agreeing a new deal.

“If we got to the 31st of October, and the EU have not shown the willingness to negotiate a better deal … the political risk of no Brexit is far worse than the economic risk of no deal,” Hunt said.

“I would take us out of the European Union in that situation.”

The result of the postal ballot will be announced in the week of July 22.

But Hunt has called for Johnson to take part in not just hustings but also televised head-to-head debates before the Conservative Party membership receive their ballot papers.

Reporters for Sky News said that Johnson had declined to take part in their planned debate next Tuesday.

“Scrutiny can be uncomfortable. But if we can’t handle it with friends, we won’t deserve to lead against our opponents,” Hunt said in a letter to Johnson before the hustings. “If you want the job, you have to turn up for the interviews.”