Seumas Milne and Corbyn reportedly visited Johnson on 16 March to discuss the UK’s response to the pandemic, and whether the country should be locked down. 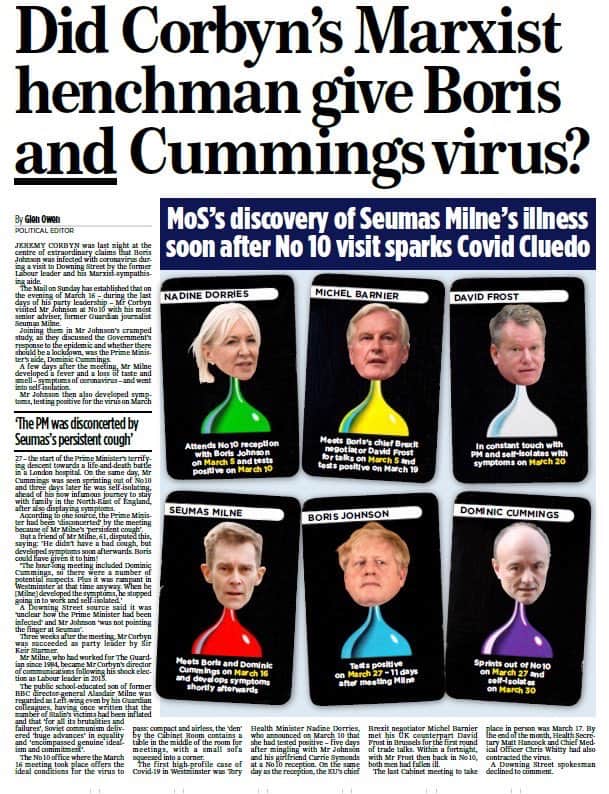 A bizarrely conspiratorial story in the Mail on Sunday has accused a former aide to Jeremy Corbyn of giving Boris Johnson and Dominic Cummings coronavirus.

The article claimed that Corbyn is now “at the centre of extraordinary claims” that Johnson “was infected with coronavirus during a visit to Downing Street by the former Labour leader and his Marxist-sympathising aide” – Seumas Milne.

Milne and Corbyn reportedly visited Johnson on 16 March to discuss the UK’s response to the pandemic, and whether the country should be locked down.

Former Guardian columnist Milne developed symptoms of Covid-19 a few days later, and went into self-isolation, whereas Johnson tested positive on 27 March – and soon found himself fighting for his life in hospital.

The paper – which infamously published a hit piece criticising Sir Keir Starmer for buying land for his disabled mother to look after some rescue donkeys – quotes one “source” describing Johnson as being “disconcerted” by Milne’s “persistent cough”.

It has also pointed the finger at Michel Barnier, the EU’s chief Brexit negotiator, for giving the prime minister the virus.

Westminster became an early hotspot for the spread of coronavirus in March. There is no way of telling how a person testing positive for Covid-19 contracted the virus.

Social media users were quick to jump on the story…

Related: Someone has re-written the Daily Mail’s Starmer smear