Survival’s Sarah Shenker reports on another murder in the fight to protect the Amazon and Brazil’s indigenous people: 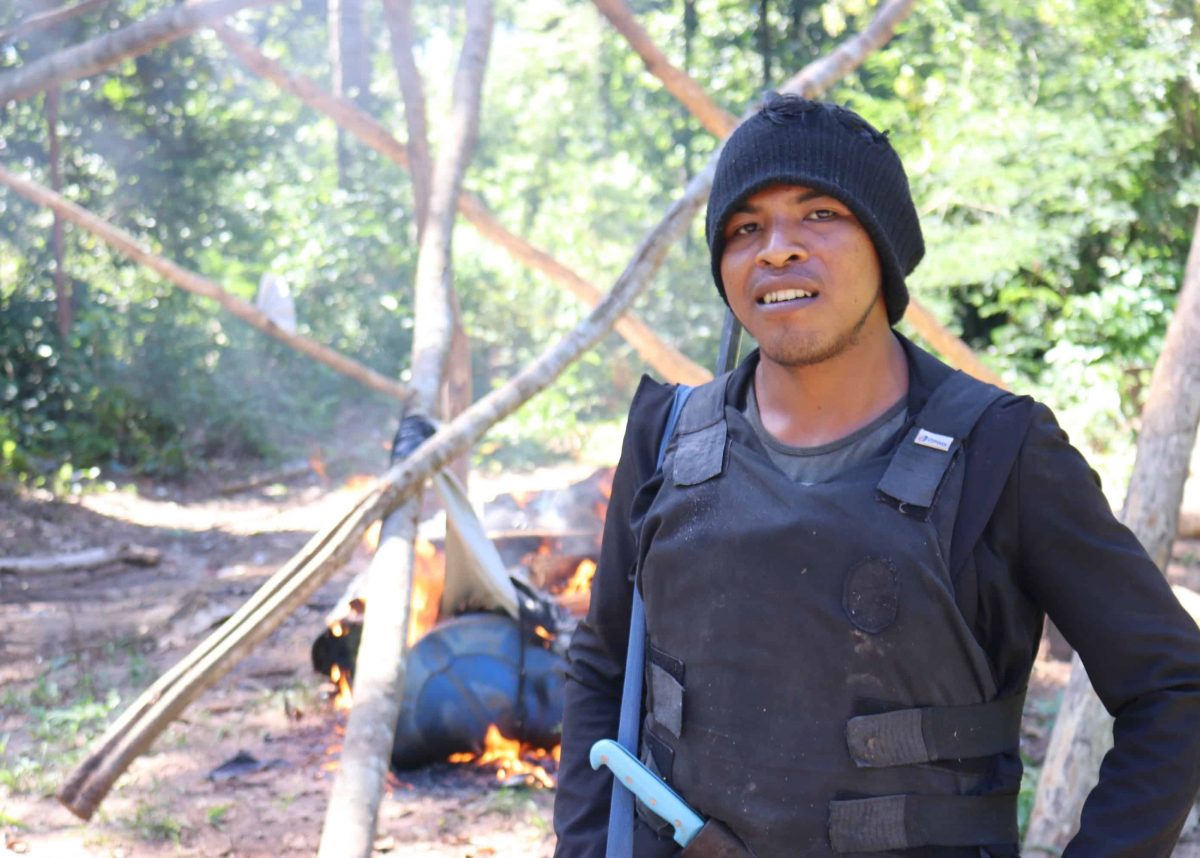 Paulino on a mission with the Guardians, wearing Sarah’s hat.(Survival)

“They’re watching us,” the Guardians whispered, as we walked in the dark. “But we’re watching them, and this is our forest. We know it inside out. We’ll catch them.” We were heading deeper into the forest, towards an illegal logging hotspot.

I was on an operation with the Guardians of the Amazon, indigenous people from the Guajajara tribe with one clear objective: to protect their land. They do this not only for their own families, but also for their uncontacted neighbors, people from the Awá tribe, who share this territory. I was invited to join them as part of my work for Survival International, the global movement for tribal peoples, who support the Guardians’ work and help amplify their voices on the global stage.

The anger and the urgency among the Guardians was palpable. We couldn’t even wait until morning; the loggers were in the forest now. So we headed out into the night, eyes adjusted to the darkness, with only the low, dim, on-and-off light of a few torches covered in cloth and pointed down at our feet. Any more light risked being seen, and the loggers are armed, aggressive, and ruthless.

At the time of this visit last April, the loggers had already assassinated three Guardians. Just a few days ago, I received news that my friend Paulino Paulo Guajajara had been fatally shot, and another friend, Tainaky Tenetehar, had been seriously wounded; he only just escaped from loggers, who had ambushed them while they were out hunting.

The hat Paulino is wearing in this picture used to be mine. We cut two eye holes in it and, when we passed through particularly dangerous areas, he’d pull it down over his face so as not to be recognized by loggers. He said that this hat could save his life, as he could be targeted any minute, and that it was well worth the sweat. When the coast was clear, he’d pull it back up with his trademark grin.

Paulino paid with his life for trying save his tribe’s forest, the Arariboia Indigenous Territory, in the north-east Amazon. It is being destroyed at a terrifying rate: President Bolsonaro’s racist words and genocidal proposals to steal indigenous land are encouraging illegal loggers to operate with renewed zeal, confident that they can make quick cash and get away with it. The number of invasions of indigenous territories, and attacks on communities, has sky-rocketed since Bolsonaro took office.

“The President has made it clear that he won’t protect even one more millimeter of indigenous land. They want to kill us all and take our land,” Tainaky himself told me. We saw countless patches of newly chopped-down forest, where dozens of trees felled by the invaders lay like corpses on the side of the paths, ready to be transported and sold on the black market.

Paulino was with us too that day, and he was upset by what we saw. “It makes me so mad to see this! These people think they can come here, into our home, and help themselves to our forest? No. We won’t allow it. We don’t break into their houses and rob them, do we? My blood is boiling, I’m so angry,” he told me.

Paulino was wearing the hat I gave him the day he was killed, but this time it didn’t protect him. Paulino and Tainaky didn’t think they were under threat when were ambushed because they weren’t looking for loggers at the time.

The Guardians respect and protect their forest as an integral part of their daily life because it gives them their food, shelter, medicine — it’s their everything. “We indigenous people know our forest better than anyone else. We’ll fight as long as we live,” Tainaky said. “There’s no other option.”

If you look at Araribóia in satellite imagery, you are struck by the contrast in color at its borders. It’s an island of green amid a sea of destruction. It’s no surprise; indigenous peoples look after their land better than anyone else. They have done so for generations and, unlike many other societies, their forest stewardship does not require detailed planning, million-dollar projects, debates in international fora or the Paris climate agreement.

We set up camp at a junction where two logging paths converged. There were snapped twigs on the forest floor — breaks which the Guardians could identify as being just hours old. The loggers were nearby. We slept around a fire — just enough flames to cook the one slab of remaining meat, but not enough to be seen. At dawn we continued, going ever deeper into the forest. I knew we were getting closer: there were constant signs of intruders.

One result of Jair Bolsonaro’s presidency is that there are more eyes on the forest: of those wanting to steal it, but also of those wanting to protect it. It’s buzzing with all the attention, and the fatal fires now ravaging vast areas are now drawing many more. All these eyes on the Amazon are provoking fights, grabbing headlines and building resistance. All of us can be allies in this resistance, but we will never truly know what people like the Guardians of the Amazon face on a daily basis. I will never truly know what Paulino went through.

Hours passed on our mission, and eventually we found the loggers’ camp. We approached cautiously, in a line, as silent as we could be. But nobody was there. The loggers had fled in a rush, leaving behind some clothes, cooking utensils, a pumpkin, and half a dozen eggs. The Guardians were quick to set the loggers’ camp alight, and burnt it to the ground.

The invaders had almost definitely been tipped off by one of their spies. They would rather flee and abandon “their” logs than cross paths with the forest’s defenders. They know the Guardians’ operations are succeeding in gradually pushing the loggers out.

Around the world, people are uniting with Brazil’s indigenous peoples to #StopBrazilsGenocide. During Bolsonaro’s first month in office, thousands took part in the biggest ever international protest for indigenous rights. The resistance is stopping Bolsonaro in his tracks.

For the future of Arariboia and other indigenous lands — the most biodiverse places on Earth, and lifelines for us all — let’s keep our eyes on the forest, and support the indigenous eyes IN the forest. We honour the life of Paulino and others like him; they will never know how grateful we all are, and we will never understand how much we really owe them. They’re the ones on the front line, day and night, of this fight for indigenous peoples, for nature, and for all humanity.

If you want to support the work of the Guardians of the Amazon, please click here

Sarah Shenker is a Senior Research and Advocacy Officer at Survival International. She works mainly on Survival’s Uncontacted Tribes and Tribal Conservationists campaigns and coordinates Survival’s Tribal Voice project. She has visited many indigenous communities in Brazil, Venezuela, Paraguay, Mexico and India. You can find her on Twitter @SarahDeeSvl

SURVIVAL INTERNATIONAL is the global movement for tribal peoples. Since 1969 Survival have helped them defend their lives, protect their lands and determine their own futures.