As the EU flag loses a star, America’s banner gains one. 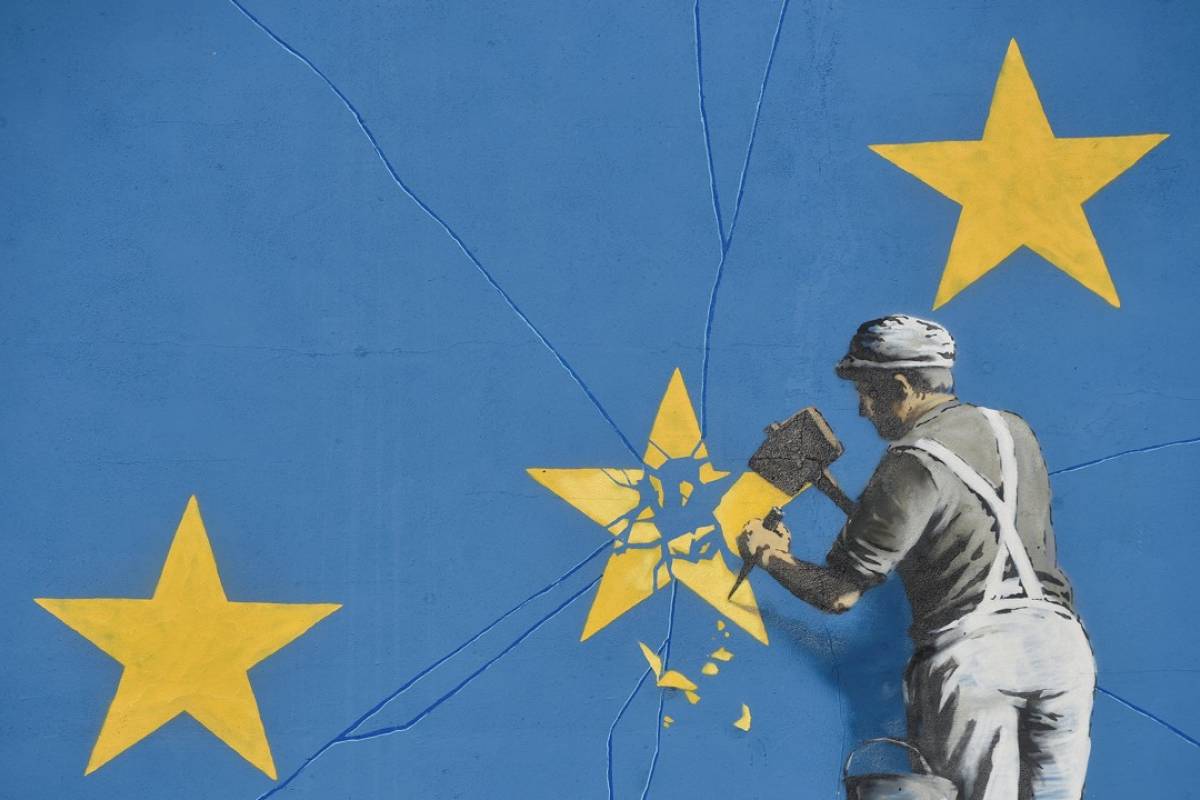 The Tories are selling the UK out to American corporations via “free trade” and so-called foreign direct investments. This is not sovereignty in action, as they claim, but rather the undermining of sovereignty. Pointing this out is not anti-Americanism, as they also claim, because “America,” like Britain, is not its corporations or political leaders, but its people, who have the potential to transform the nation into a beacon of progress.

Via foreign direct investment (FDI), giant corporations purchase shares in companies abroad—e.g., Amazon buying into Britain’s Deliveroo—giving them leverage over how they treat employees and manage finances. The UK Department for International Trade says: “the realisation of … positive [FDI] impacts depends on certain specific factors and characteristics of the host economy.” In other words, not everyone benefits.

International Monetary Fund data suggest that 40 percent of FDI worldwide ($15 trillion) is “phantom capital” designed “to minimise multinationals’ global tax bill.” Examples include Apple, which has nearly 50 percent of Britain’s cellphone market share and pays little in taxes, registering its head office in Ireland to avoid paying US rates. The UK’s share of inward, phantom FDI rose from 3 percent in 2009 to nearly 20 by 2017.

Consider ASDA (worth around $6.8bn), bought by the US giant, Walmart (worth over $370bn). A study into ASDA as an FDI opportunity found that the UK was attractive because of its low wages and poor unionisation. ASDA staff are typically paid just £9 an hour and face demanding contracts requiring many to work short-notice. By 2015, the four big supermarkets (including ASDA) enjoyed an £11bn subsidy via social security pay-outs to employees who weren’t paid a living wage. Wealth is also funnelled to the parent. Between 2004 and 2011, nearly £870m of ASDA money went to Walmart in the form of “technical assistance, services and royalties.”

By 2018, more than half the UK’s stock market value was owned by foreign, mainly US and Canadian, investors (£1tn). A so-called US-UK Free Trade Agreement (FTA) could worsen the situation. One US lobbyist says of the proposed FTA: “the U.S. should ensure broad and deep market access commitments, enhancing volumes of cross border financial service transactions and foreign direct investment.”

US-UK trade is valued at over $270 billion. A UK government policy paper states that an FTA would eliminate tariffs, cut red tape, and could potentially benefit UK businesses… by just £15bn over a 15-year-period, while contributing a mere 0.16 percent more to GDP. This raises questions about the purpose of FTAs.

“Free trade” is a propaganda term disguising the levels of access given to large, multinational conglomerates to other countries’ resources, including publicly-owned utilities and labour markets. When PM Johnson met US Vice President, Mike Pence, Johnson spoke of wanting to export “shower trays” and “haggis” to the US. Presumably, these innocuous examples were intended to give voters the impression of tangibility. But much so-called “trade” involves intangibles, like intellectual property patent monopolisation, big data, and financial products that benefit few except CEOs and investors.

For instance, one meeting of the US-UK Trade and Investment Working Group covered “services and investment, including financial services”—hardly shower trays and haggis. A Confederation of British Industry lobby note states that the US and Britain are software leaders, so “a digital trade chapter should ensure that this continues”—because Facebook, Google, etc., have such excellent reputations when it comes to data protection.

In February, US and British representatives began phase one of the sell-out of the UK, when they signed the Mutual Recognition Agreement on Conformity Assessment. The UK government says that the Agreement covers “pharmaceuticals” (so, the NHS is “on the table” after all) and tech/telecoms (hence the Huawei controversy explored below).

The Agreement calls for “mutual recognition of conformity” to standards on “health, safety, environmental, and consumer protection.” This means that UK standards are likely to be lowered to match US standards. If you think that the UK has any negotiating power, ask yourself: who has the biggest economy, Britain with a GDP of $2.8 trillion or the US with a GDP of $21.4 trillion and a trade surplus with the UK?

The next stage in the sell-out is the Trade Bill 2020. During a debate, Labour’s former Shadow Trade Sec., Barry Gardiner, pointed out that potential Investor-State Dispute Settlements, contained within the Trade Bill, “enable our Government to be sued by foreign companies in specialist supranational courts in a way that is not even accessible to our own domestic companies.”

Huawei as a bellwether

Putting aside the question of why Britain can’t build its own 5G network (which would be a real act of sovereignty), the Tories gave themselves a choice: offer telecoms infrastructure contracts to Chinese-based companies or to US-approved firms. The decision signals which way the UK is likely to bend in post-Brexit trade and investment.

Trump was reportedly “apoplectic” in February, when he learned that Johnson had initially decided to reward Huawei. At the time, the UK security services advised the government that doing so would not cause a security risk. British telecom infrastructure has included Huawei since 2008. Referring to the Huawei Cyber Security Evaluation Centre’s liaisons with government, the UK government’s National Cyber Security Centre (NCSC) confirmed that, while “not perfect,” the “model has worked pretty well for the past 8 years.” So much so, in fact, that in March and against the wishes of 38 Tory rebel MPs (many of them ardent Brexiteers, ironically), the government passed a bill enabling Huawei to build part of the 5G network.

But within weeks, the US imposed additional sanctions on Huawei. US components could no longer be integrated with Huawei technology. This potentially left the UK buying from riskier suppliers. The NCSC changed its tune, accordingly: “Additional US sanctions … have meant the NCSC has had to revise its advice on how to manage the presence of high risk vendors.”

After his initial posturing, assuring the public that China’s Huawei—not Trump’s America—would construct parts of the UK’s network, Johnson U-turned and announced a total ban on Chinese components in telecoms infrastructure by 2027. The move is estimated to cost at least £2bn.

To get the public to acquiesce, the above must be reinforced by an efficient propaganda and cultural system that focuses on the personalities of figureheads, not party policies, à la the US. Radio and television are two examples. Where the US has the talkshow host Rush Limbaugh, who referred to America’s first black President, Barack Obama, as “boy,” the UK has LBC’s Nick Ferrari, who asked Afua Hirsch, “Why do you stay in this country?” America’s Fox News cheerleads for Republicans. Likewise Britain’s Sky News echoed Tory policy, presenting 2019 as “the Brexit election.”

Just as Trump tries to consolidate power by firing dissidents and signing executive orders, Johnson tried to prorogue Parliament and is now purging the civil service. Labour must do more to raise awareness about the dangers of US-led “free trade” and Trump-style culture wars. With so few MPs, that’s impossible in Parliament. But with grassroots movements behind Labour, members can organise community education and resistance.

Related: Russian interference in UK politics is just the tip of the iceberg