As people queued up to vote yesterday, The Times columnist Caitlin Moran sent Twitter into a mini meltdown by tweeting: “Obviously there’s a more nuanced take on this, but, broadly, voting for Labour = not being a cunt.” As many of her followers retweeted her election day exhortation, others predictably chose to put their noses out of joint […] 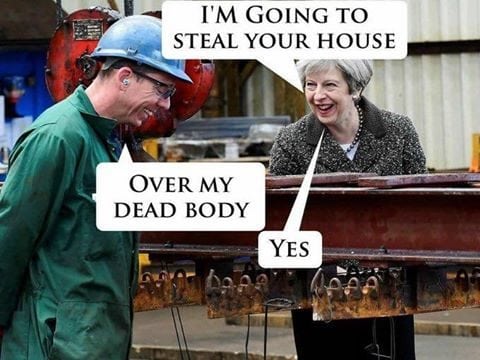 As people queued up to vote yesterday, The Times columnist Caitlin Moran sent Twitter into a mini meltdown by tweeting: “Obviously there’s a more nuanced take on this, but, broadly, voting for Labour = not being a cunt.”

As many of her followers retweeted her election day exhortation, others predictably chose to put their noses out of joint on the spikey comment she has since deleted and started tweeting angrily about being #Caitlinscunts.

I'm a cunt
And so is my wife.#CaitlinsCunts

This is extraordinary. My friends, family, neighbours & colleagues all vote for different parties. I have respect for all of their choices. https://t.co/UwAXgadwj9

( – Actually Tim I don’t think that Caitlin Moran’s C-bomb tweet is official Labour Party policy, but I’m sure if you ask they will confirm that.)

While there are many obvious arguments against using the ‘C’ word in political debate, there are certain special occasions when there is no better choice of phrase to get a point across.

And as outraged twitterers of the right chose to ignore, from a semantic point of view tweeting  “voting for Labour = not being a cunt” is not exactly the same as “voting Tory or other parties or choosing to abstain  = being a cunt”. – Whatever the accuracy of the second proposition, technically Moran wasn’t, as Julia Hartley-Brewer fumed “basically calling two thirds of the country “c*nts””.

On a backpacking journey through India as a teen, a Sadhu (holy man) drew me close and asked me if I wanted to know the meaning of life. I nodded, wide-eyed as he closed his eyes and mouthed slowly: “Know yourself.”

Second to that, the best bit of advice I have ever heard imparted is: “don’t be a cunt”.

And when it comes to elections, though it would be wrong for candidates to knock on constituents’ doors and reduce all the manifold reasons for electing them to that condensed phrase, if all voters followed the sage advice of “not being a cunt” on polling day the world without doubt would be a much better place.

In the case of this week’s pointless snap election power-grab gone awry, some of the more nuanced arguments for “not being a cunt” that Moran hinted at could have included:

don’t be a cunt, vote Labour so the vast majority of state schools aren’t forced to lay off teachers, have giant class sizes and lose parts of the curriculum

don’t be a cunt, vote Labour as it’s not great for the NHS to be privatised, crippled by underfunding, shutting dozens of hospitals, and turning down people for cancer and other treatments they were entitled to under Labour

don’t be a cunt, vote Labour as we’re all much safer if we hire, rather than lay off thousands of police officers, border guards, paramedics, firefighters – why treat the public sector workers who look after us in our hour of need so shabbily?

don’t be a cunt, austerity is estimated to cause tens of thousands of unnecessary deaths each year, and our national debt is only going up, why not vote Labour and a costed manifesto based on investing in all that makes Britain great?

don’t be a cunt, why on earth would you want a party in power that will send elderly people into fuel poverty – a massive killer in this country – and if they survive that, make elderly and infirm people choose between the vital care they have paid taxes for all their life, and losing the house they saved towards so their children have something in an increasingly insecure economy

Apologies for the language, but if only more people chose to not be a cunt…

We expect some of you will have a different point of view. Do you have a different point of view, or would you like to submit an article to TheLondonEconomic.com? Submit your article to our review team here: Submit My Article to TheLondonEconomic.com And please comment below your thoughts on political discourse, the election, this article, whether you think the writer is a c**t or not.