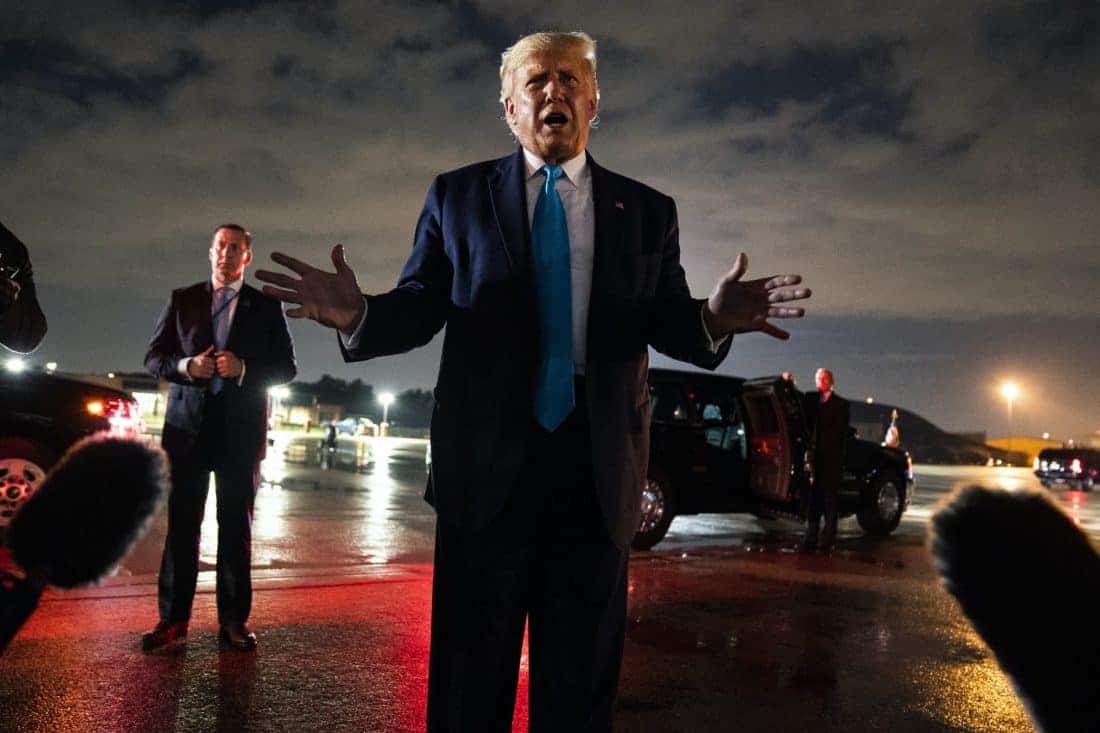 Donald Trump seems to ramping up nationalist rhetoric and his trade war with China, of which banning TikTok is part of it, as he apparently tries to appeal to his core voters in the lead up to the November Presidential election. He is trying to portray himself as the saviour of the suburbs, which can quite easily be read as white people.

Trump has stepped up his rhetoric on cultural issues, aiming to boost enthusiasm among rural voters in the state of Wisconsin as he tries to repeat his path to victory from 2016. He views success in its less-populated counties as critical to another term in office. Mr Trump also previewed aid to the region’s farmers, saying 13 billion US dollars (£10 billion) would begin flowing “starting next week” to help farmers. He provided no details.

In Mosinee, he called for a statute to ban burning the American flag in protest – a freedom protected by the US supreme court – and criticised sports players and leagues for allowing demonstrations against racial inequality.

“We have enough politics, right?” he said, joking that sometimes: “I can’t watch me.”

Addressing protests in sport, he added: “People don’t want to see it and the ratings are down.”

He derided The New York Times’ “1619 Project”, which aims to recognise the often-overlooked consequences of slavery and the contributions of Black Americans.

“For many years now, the radicals have mistaken Americans’ silence for weakness. But they are wrong,” Mr Trump said.

“There is no more powerful force than a parent’s love for their children – and patriotic moms and dads are going to demand that their children are no longer fed hateful lies about this country.”

The president’s comments marking the 233rd anniversary of the signing of the Constitution amounted to a defence of white culture and a denunciation of Democrats, the media and others who he accused of trying to indoctrinate school children and shame their parents’ “whiteness”.

He also argued that America’s founding “set in motion the unstoppable chain of events that abolished slavery, secured civil rights, defeated communism and fascism and built the most fair, equal and prosperous nation in human history”.

But he did not mention the 246 years of slavery in America, including the 89 years it was allowed to continue after the colonies declared independence from England.

Nor did the president acknowledge the ongoing fight against racial injustice and police brutality, which has prompted months of protests this year.

President Trump has long fanned the nation’s culture wars, including defending the display of the Confederate battle flag and monuments of Civil War rebels from protesters seeking their removal.

President Trump has already cracked down on anti-racism training sessions in federal agencies.

He said he will soon sign an order to establish a commission to promote patriotic education dubbed the 1776 Commission.

The panel, he said, would be tasked with encouraging educators to teach students “about the miracle of American history” and plan for the commemoration of the 250th anniversary of the signing of the Declaration of Independence.

The move is a response to The New York Times’ “1619 Project”, which highlights the long-term consequences of slavery and the contributions of black Americans.

The project began after The New York Times Magazine published a series on the 400th anniversary of slavery in the United States.

Nikole Hannah-Jones won a Pulitzer Prize for her piece in the magazine. Her essay was titled “The 1619 Project”, because in late August of that year, a ship arrived in American with some 20 to 30 enslaved Africans, marking the first arrival of slaves.

The project evolved from the essay and, with help from the Pulitzer Centre, educational materials were developed to enhance the knowledge about slavery, not rewrite history, according to the Times.

“American parents are not going to accept indoctrination in our schools, cancel culture at work, or the repression of traditional faith, culture and values in the public square,” President Trump said. “Not anymore.”

In response to the remarks, Ms Hannah-Jones said the First Amendment to the Constitution abhors government attempts to censor speech and guarantees a free press.

“The efforts by the president of the United States to use his powers to censor a work of American journalism by dictating what schools can and cannot teach and what American children should and should not learn should be deeply alarming to all Americans who value free speech,” she said.

The US will ban the downloads of the Chinese apps TikTok and WeChat on Sunday, with a total ban on the use of the latter, citing national security and data privacy concerns.

A total ban on the use of TikTok will follow on November 12, but US Commerce Secretary Wilbur Ross said early on Friday on Fox Business Network that access to that app may be possible if certain safeguards are put into place.

“At the president’s direction, we have taken significant action to combat China’s malicious collection of American citizens’ personal data, while promoting our national values, democratic rules-based norms, and aggressive enforcement of US laws and regulations,” Mr Ross said in a prepared statement.

The government order also raises questions about California tech giant Oracle’s recent deal to take over US operations of TikTok, a requirement by the Trump administration for the app to continue operating in the US.

Related – Donald Trump Jr on alleged Kenosha shooter: “We all do stupid things at 17”