The US president is making a controversial visit to the Wisconsin city, which has seen rioting after a black man was shot and paralysed by police. 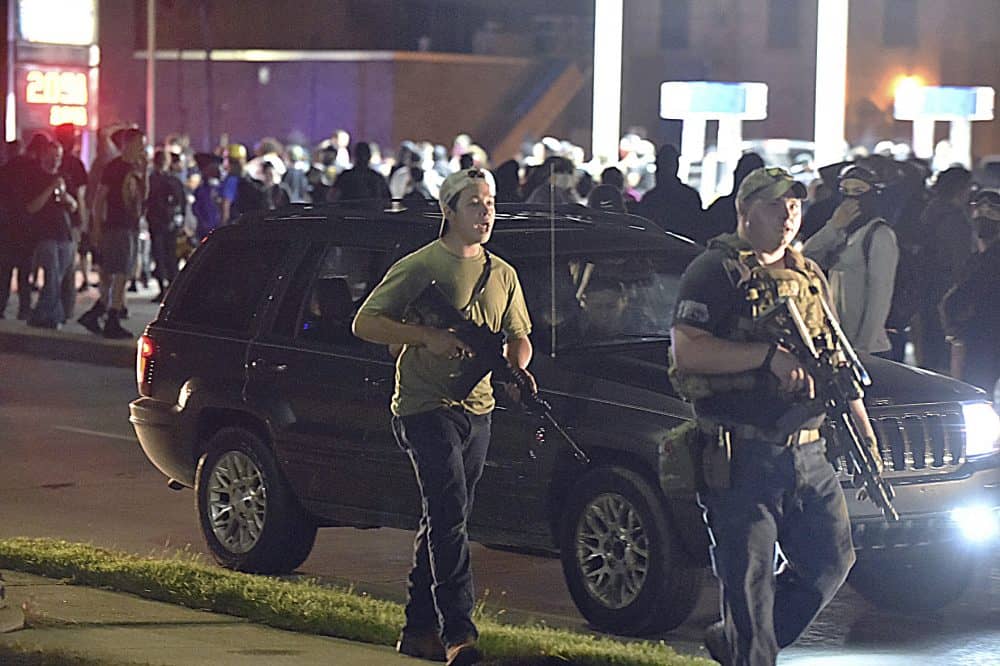 Kyle Rittenhouse, left, with backwards cap, walks along Sheridan Road in Kenosha, Wis., Tuesday, Aug. 25, 2020, with another armed civilian. Prosecutors on Thursday, Aug. 27, 2020 charged Rittenhouse, a 17-year-old from Illinois in the fatal shooting of two protesters and the wounding of a third in Kenosha, Wisconsin, during a night of unrest following the weekend police shooting of Jacob Blake. (Adam Rogan/The Journal Times via AP)

US president Donald Trump has refused to condemn the teenager accused of fatally shooting two people in Wisconsin, saying he “probably would have been killed” if he had not opened fire on demonstrators.

Speaking during a White House briefing before he visits Kenosha, Mr Trump said 17-year-old Kyle Rittenhouse was being “very violently attacked” before he allegedly opened fire on people protesting over the shooting of a black man, Jacob Blake, by a police officer in the city.

Last week, Rittenhouse grabbed an AR-15 style rifle and joined several other armed people in the streets of Kenosha, where businesses had been vandalised and buildings burned following the police shooting that left Mr Blake paralysed.

Prosecutors say that by the end of the night, Rittenhouse had killed two people and severely wounded a third.

Mr Trump also addressed accusations that his supporters in Portland, Oregon, were being violent.

“Paint is a defensive mechanism. Paint is not bullets,” the US leader said. “They protested peacefully.”

The White House said Mr Trump is not going to meet Mr Blake’s family during his visit to Kenosha.

“I am a tremendous fan of law enforcement and I want to thank law enforcement,” Mr Trump told Fox News in an interview on Monday night. “They’ve done a good job.”

Mr Trump also suggested that some police officers “choke” when faced with challenging situations, and compared them to golfers who “miss a 3ft putt”.

Mr Trump has claimed the mantle of the “law and order” candidate, as he offers himself as the leader best positioned to keep Americans safe, a day after his Democratic rival Joe Biden criticised him over deadly protests that have sprung up on his watch.

Mr Trump is travelling to Kenosha over the objections of local leaders in the city, which has been riven by protests since Mr Blake was shot seven times in the back on August 23.

While defending Rittenhouse after the fatal shooting of two men during subsequent protests, Mr Trump accused the former vice president Mr Biden of siding with “anarchists” and “rioters”.

Wisconsin’s Democratic governor, Tony Evers, who deployed the National Guard to quell demonstrations in response to Mr Blake’s shooting, pleaded with Mr Trump to stay away for fear of straining tensions further.

The White House said the president was expected to meet with law enforcement and tour “property affected by recent riots”.

Mr Trump insisted his appearance could “increase enthusiasm” in Wisconsin, perhaps the most hotly contested battleground state in November’s presidential race, as the White House said he “wants to visit hurting Americans”.

Mr Trump is expected to take credit for calling in the National Guard – an act carried out by Mr Evers – and for bringing federal law enforcement to the city to restore the peace.

Mr Biden, in his most direct attack on the president, accused Mr Trump on Monday of causing the divisions that have ignited the violence.

He delivered an uncharacteristically blistering speech in Pittsburgh and distanced himself from radical forces involved in altercations.

Mr Biden said of the president: “He doesn’t want to shed light, he wants to generate heat, and he’s stoking violence in our cities. He can’t stop the violence because for years he’s fomented it.”

Mr Trump, for his part, reiterated that he blames radical troublemakers stirred up and backed by Mr Biden.

Mr Biden has accused the president of “poisoning” the nation’s values.

When he was asked about one of his own supporters who was charged with killing two men during the mayhem in Kenosha, Mr Trump declined to denounce the killings and suggested that Kyle Rittenhouse was acting in self-defence.

“That was an interesting situation,” Mr Trump said at a news conference.

“He was trying to get away from them, I guess, it looks like, and he fell. And then they very violently attacked him … He was in very big trouble. He would have been – you probably would’ve been killed.”