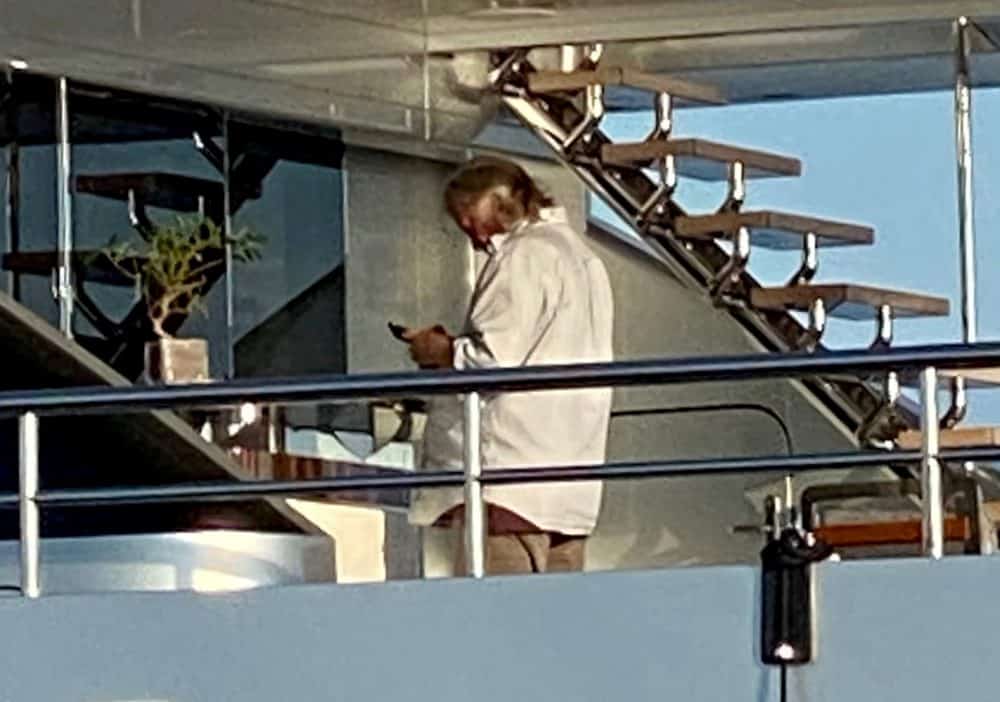 These pictures show Steve Bannon languishing on the super yacht of a Chinese billionaire – the evening before his arrest.

He was later apprehended on charges that he defrauded donors to a private fund-raiser called We Build the Wall.

A bystander, who shot the photos said: “We saw the yacht come in on Tuesday night and the next day we saw a C-130 military plane circle over it, today there were more coast guard military planes all around it.”

According to a federal indictment unsealed in Manhattan the 66-year-old media executive conspired with a wounded Air Force veteran and a Florida venture capitalist to cheat hundreds of thousands of donors by falsely promising that their money had been set aside exclusively toward building a section of border wall.

Bannon was arrested early Thursday on the 150-foot yacht that was sailing off the coast of Westbrook, Connecticut.d

Bannon pleaded not guilty to charges that he ripped off donors to an online fundraising scheme to build a southern border wall.

He made his plea in federal court, hours after he was pulled from a yacht off the coast of Connecticut and arrested.

He and three others were charged in an indictment unsealed in Manhattan federal court.

At his hearing the same day, Bannon had his hands cuffed in front of him while a large, white mask covered most of his face.

He rocked back and forward as he sat on a chair in a holding cell at Manhattan federal court, from where he appeared via video as his lawyers were on the telephone.

The We Build The Wall fundraiser was headed by men who pushed their close ties to President Trump, giving their effort a legitimacy that helped them raise more than 25 million US dollars.

But according to the criminal charges unsealed Thursday, much of the money never made it to the wall.

Instead, it was used to line the pockets of group members, including Mr Bannon, who served in Trump’s White House and worked for his campaign.

He allegedly took over one million US dollars, using some to secretly pay co-defendant Brian Kolfage, the founder of the project, and to cover hundreds of thousands of dollars in personal expenses.