US intelligence sources are quoted saying a satellite detected infrared "blips" of two missile launches, followed by another blip of an explosion.

It is “highly likely” that an Iranian anti-aircraft missile downed a Ukrainian jetliner, killing all 176 people on board, two US officials have said.

The crash came just a few hours after Iran launched a ballistic missile attack against Iraqi military bases housing US troops. The missile attack came amid a confrontation with Washington over the US drone strike that killed an Iranian general last week.

The officials said they had no certain knowledge of Iranian intent but said it could have been a mistake and that the airliner was mistaken for a threat.

CBS News quoted US intelligence sources saying a satellite detected infrared “blips” of two missile launches, followed by another blip of an explosion.

US President Donald Trump said on Thursday that “I have my suspicions” over the plane. “Somebody could have made a mistake,” he said.

Downing Street said it was looking into “very concerning” reports about the Tehran airliner crash as the US claimed the jet was shot down by a missile.

Boris Johnson used a phone call with Ukrainian President Volodymyr Zelenskyy to call for a “full, credible and transparent investigation” into what happened.

Ukraine’s Secretary of the National Security and Defence Council, Oleksiy Danilov, posted on Facebook that a missile attack was one of the possible causes of the fire that caused Ukraine International Airlines’ (UIA) the PS752 by aircraft to break-up as it gained height after taking off from Tehran airport on Wednesday.

All 167 passengers on board were killed, including three Britons.

The Iranian military had disputed suggestions the airliner was brought down by a missile, with officials in Iran blaming an engine fire.

But Mr Danilov said “information about the detection of the shards of a Russian missile” – understood to be a Russian Tor M1 missile – meant an attack on the plane could not be ruled out. 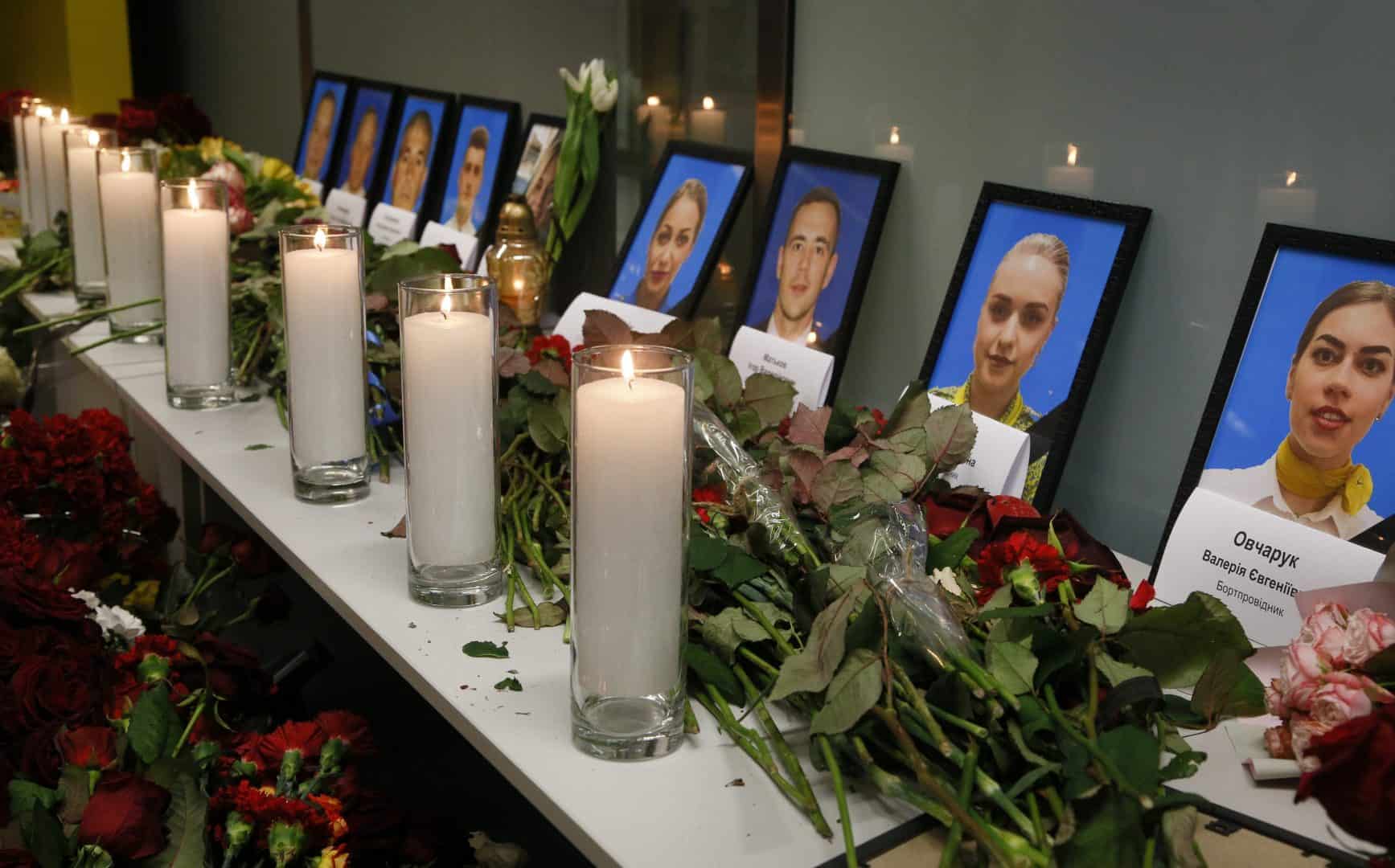 In his social media post, he said any investigation would have to also probe whether the plane had been subject to a terrorist attack by someone on-board the flight, or whether it collided with another object or an engine fire occurred for “technical reasons”.

All three were named on the list of 167 passengers on board flight PS752 by Ukraine International Airlines (UIA), which crashed moments after it left Imam Khomeini International Airport in Tehran at 6.10am local time (2.40am GMT) on Wednesday, bound for the Ukrainian capital Kyiv.

The Prime Minister pushed for the facts to be established during his conversation with Mr Zelenskyy on Thursday.

Mr Zelenskyy ordered a criminal investigation soon after the details of the tragedy emerged this week.

He has invited United Kingdom aviation experts to join the investigation into the crash.

A spokesman for the President said: “The President invited the United Kingdom to join the investigation.

“Boris Johnson supported this idea and stressed that the best British experts should be involved in clarifying all the circumstances of the tragedy.”

The airline ruled out human error in the aftermath of the incident, and crew were not said to have made an emergency call.

The crash comes amid escalating tension in the Persian Gulf following the killing last week of Iranian general Qassem Soleimani by the US, prompting several airlines to reroute flights away from Tehran’s airspace.

Iran fired missiles at army bases in Iraq were both US and UK troops were stationed, although both Number 10 and the White House said there had been no casualties incurred.

President Donald Trump suggested he believes Iran was responsible and would not directly lay the blame on Iran, but dismissed Iran’s initial claim that it was a mechanical issue.

“Somebody could have made a mistake on the other side,” Mr Trump said, noting the plane was flying in a “pretty rough neighbourhood”.

“Some people say it was mechanical,” Mr Trump added.

“I personally don’t think that’s even a question.”

The US officials would not say what intelligence they have that points to an Iranian missile.

But they acknowledged the existence of satellites and other sensors in the region, as well as the likelihood of communications intercepts and other similar intelligence. 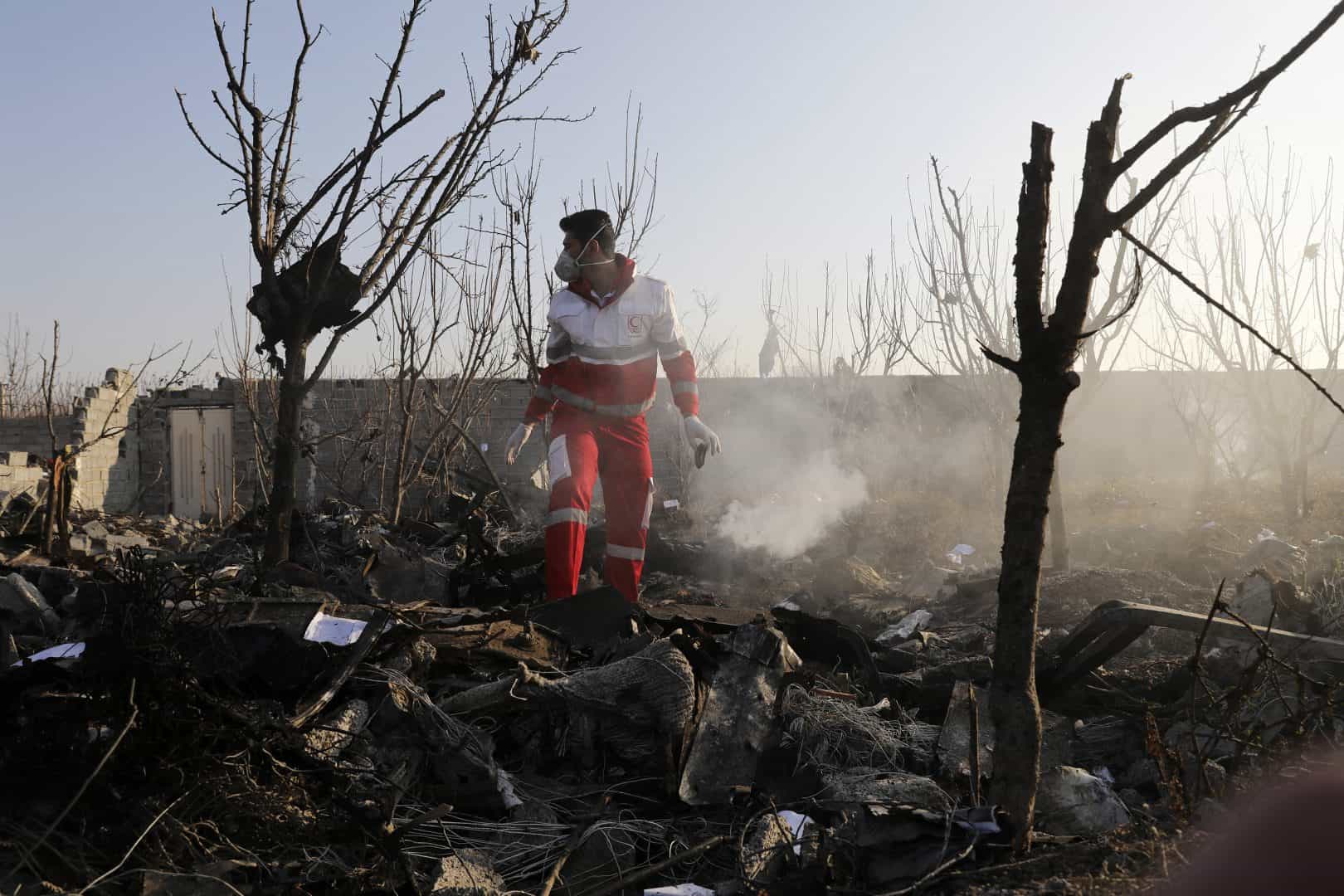 The US assessment comes after a preliminary Iranian investigative report released on Thursday said the pilots never made a radio call for help and claimed the aircraft was trying to turn back for the airport when the burning plane went down.

Ukraine, meanwhile, said it considered a missile strike as one of several possible theories for the crash, despite Iran’s denials.

The Iranian report suggests that a sudden emergency struck the Boeing 737 operated by Ukrainian International Airlines when it crashed, just minutes after taking off from Imam Khomeini International Airport in Tehran.

Investigators from Iran’s Civil Aviation Organisation offered no immediate explanation for the disaster, however.

Iranian officials initially blamed a technical malfunction for the crash, something initially backed by Ukrainian officials before they said they would not speculate amid an ongoing investigation.

The Ukrainian International Airlines took off at 6.12am on Wednesday Tehran time, after nearly an hour’s delay at Tehran’s Imam Khomeini Airport, the main airport for travellers in Iran.

It gained altitude heading west, reaching nearly 8,000ft, according to both the report and flight-tracking data.

Then something went wrong, though “no radio messages were received from the pilot regarding unusual situations”, the report said.

In emergencies, pilots reach out to air traffic controllers to warn them and to clear the runway for their arrival, though their first priority is to keep the aircraft flying.

Witnesses, including the crew of another flight passing above it, described seeing the plane engulfed in flames before crashing at 6.18am, the report said.

Flight-tracking data for the plane stopped before the crash, which occurred in the town of Shahedshahr to the north east of the plane’s last reported position.

That is the wrong direction of the flight plan, bolstering the report’s claim that the pilots tried to turn the aircraft back to the airport.

The crash caused a massive explosion when the plane hit the ground, probably because the aircraft had been fully loaded with fuel for the flight to Kyiv, Ukraine.

The report also confirmed that both of the so-called “black boxes” that contain data and cockpit communications from the plane had been recovered, though they sustained damage and some parts of their memory was lost.

It also said that investigators have initially ruled out laser or electromagnetic interference as causing the crash. 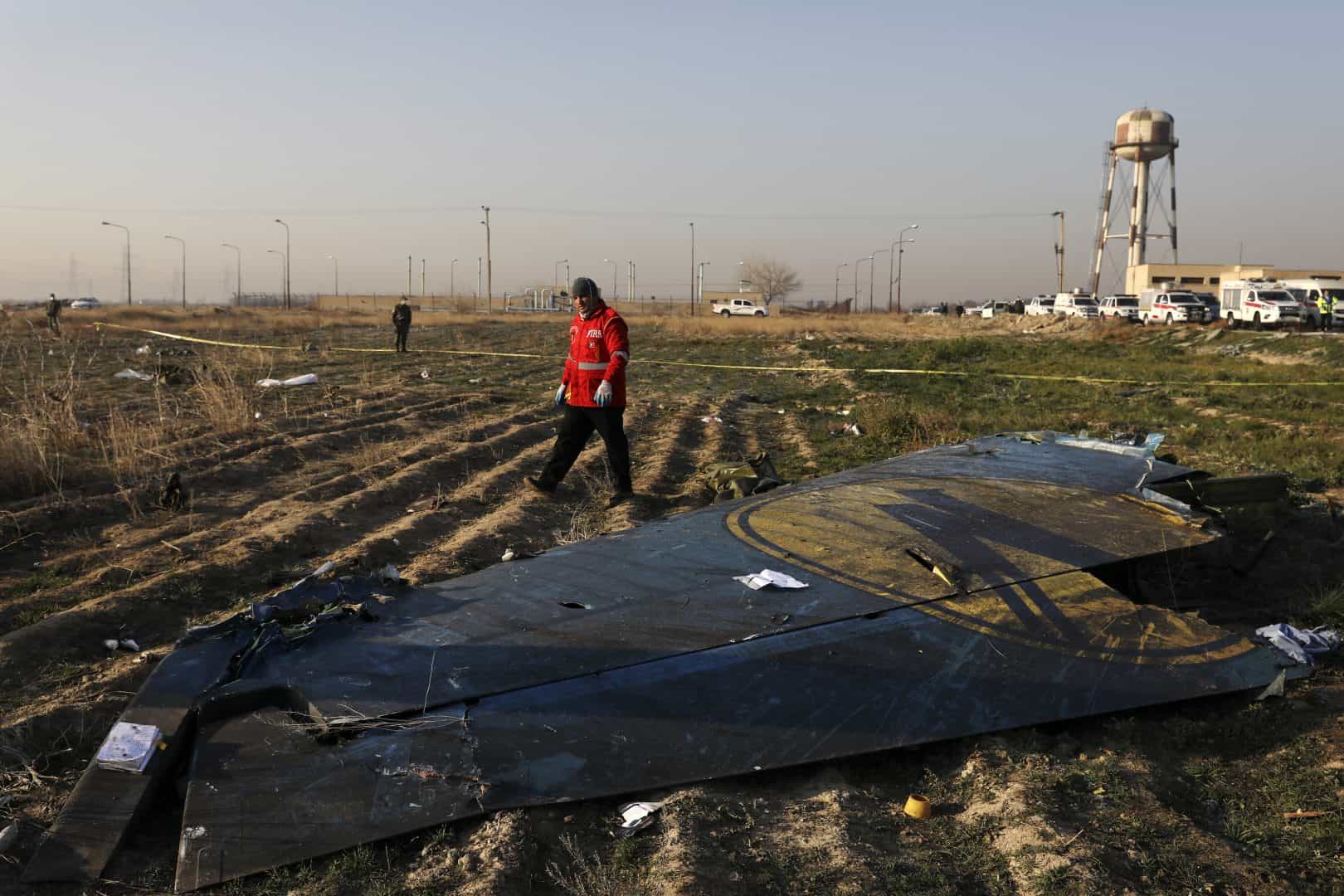 Hours before the plane crash, the US Federal Aviation Administration had issued an emergency flight restriction barring US carriers and pilots from flying over areas of Iraqi, Iranian and some Persian Gulf airspace, warning of the “potential for miscalculation or mis-identification” for civilian aircraft due to heightened political and military tensions.

Oleksiy Danilov, secretary of Ukraine’s Security Council, told Ukrainian media that officials had several working theories regarding the crash, including a missile strike.

“A strike by a missile, possibly a Tor missile system, is among the main (theories), as information has surfaced on the internet about elements of a missile being found near the site of the crash,” Mr Danilov said.

Ukrainian investigators that arrived in Iran earlier on Thursday are currently awaiting permission from Iranian authorities to examine the crash site and look for missile fragments, Mr Danilov said. 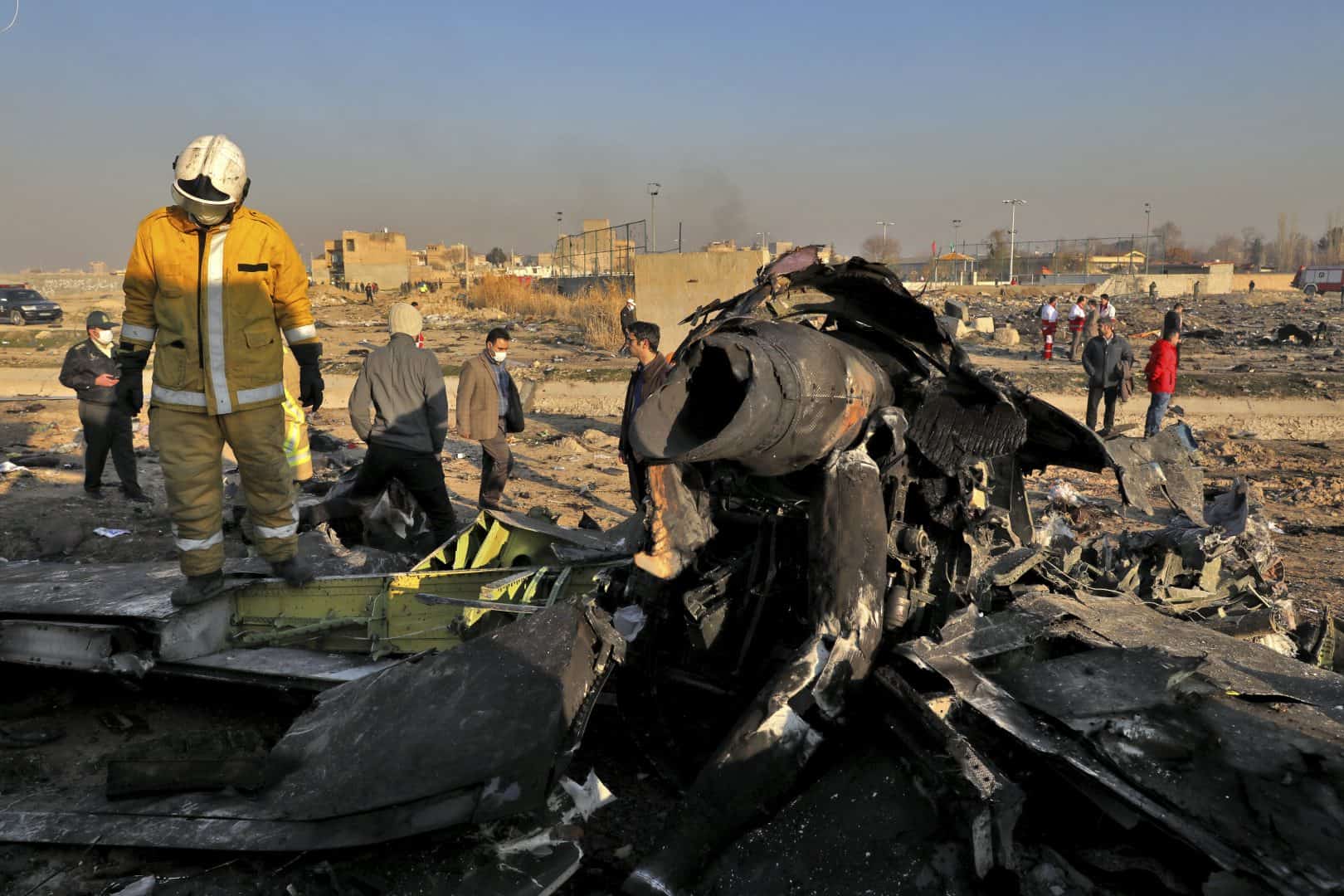 The Tor is a Russian-made missile system.

Iran has displayed the missiles in military parades as well.

General Abolfazl Shekarchi, the spokesman of the Iranian armed forces, denied a missile hit the plane in comments reported on Wednesday by the semi-official Fars news agency.

He dismissed the allegation as “psychological warfare” by foreign-based Iranian opposition groups.

Ukraine has a grim history with missile attacks, including in July 2014 when one such strike downed a Malaysian Airlines flight over eastern Ukraine, killing all 298 people aboard.

Mr Danilov also said other possible causes under consideration included a drone or another flying object crashing into the plane, a terrorist attack or an engine malfunction causing an explosion.

However, no terror group has claimed responsibility for the attack and the plane was only three-and-a-half years old.