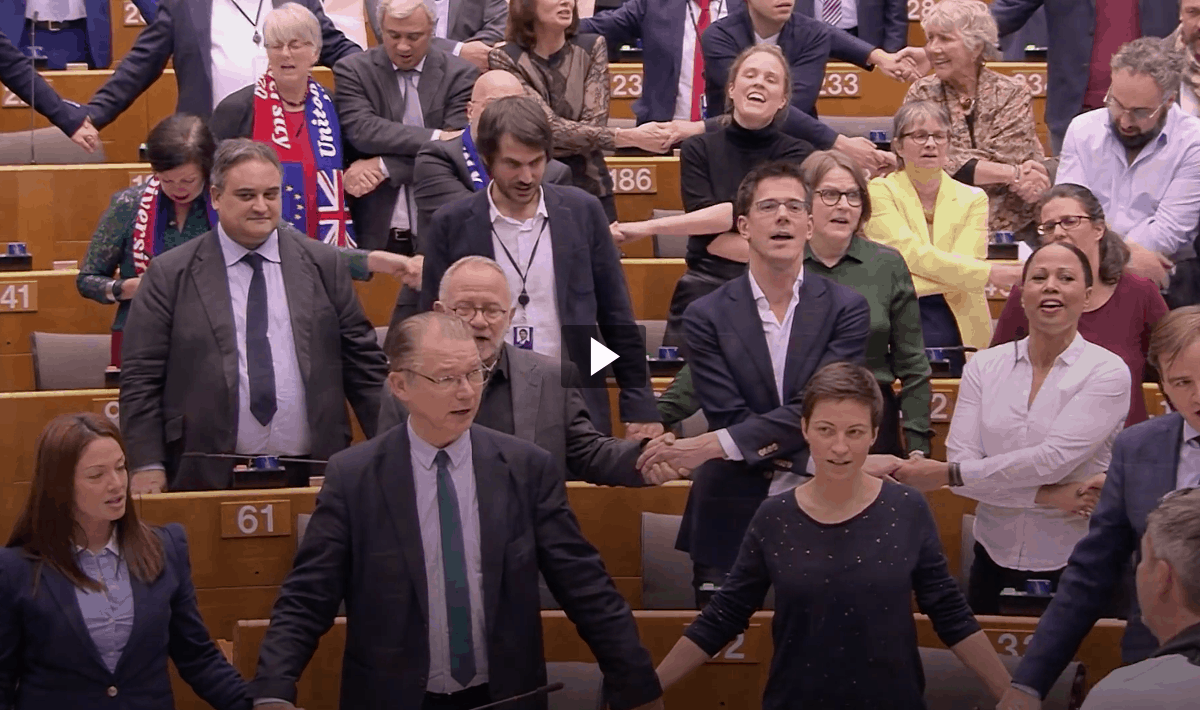 The contrast could not have been greater between Nigel Farage’s petty defiance of the European Parliament, waving flags and boasting about populism winning, and the solidarity of EU MEPs with their UK colleagues, holding hands and singing Auld Lang Syne in a gesture of eternal friendship.

Farage rallied Brexiteers with a small-minded speech insulting the institution that he will claim a pension of up to 70 percent of his MEP salary of £7,599.14 a month from. But there were tears and a chorus of Auld Lang Syne from other parliamentarians.

The final vote on the Withdrawal Agreement followed an afternoon of fireworks, tears, anger in the EU parliament chamber as MEPs made their final farewells.

Remain-supporting MEPs burst into a chorus of Auld Lang Syne as the vote passed 621 to 49 that drowned out the petulant cheers from Brexit Party MEPs.

Nigel Farage was divisive as ever in his final speech too the EU parliament chamber, boasting of the benefits of populism before eventually being cut off for going overtime ranting while waving Union flags.

Farage described the current global political climate as “globalism against populism, adding: “You may loathe populism, but I tell you a funny thing, it is becoming very popular.”

The Brexit party leader who had decorated his seat with his own flags, extolled the “benefits” of populism.

In response to MEPs who expressed a hope that the UK would one day return to the EU fold, he said: “Once we have left, we are never coming back and the rest, frankly is detail.”

He added: “What we have proved is that the British are too big to bully, thank goodness.”

“It’s as simple as that. I hope this is the beginning of the end of this project, it’s a bad project. It’s undemocratic, in fact it’s anti-democratic. It gives people power without accountability.

Deputy speaker Mairead McGuinness shut the Brexit Party leader up, cut off his microphone, telling him: “Sit down, put your flags away or take them with you if you’re leaving now”.

The parliament also honoured the 75th anniversary of the liberation of Auschwitz. Commission president Ursula von der Leyen said: “Europe rose with the intention never again to give quarter to absolute evil.

“It didn’t start in Auschwitz.

“It started much earlier in people’s mind. It started with the weakening of the ability to be angry at the denigration that other people fell victim to.”

She added: “Europe rose with the firm will never again to give any quarter to absolute evil. Europe knows like no other continent do not let it take root. Never, ever again.”

The EU Parliament building was packed out with politicians, press and spectators ahead of the final vote. Crowds of international news crews lined the walkways between the parliamentary buildings trying to flag down passing MEPs and diplomats for interviews.

A packing case had been placed outside each UK MEP’s office to make way for new arrivals from the remaining EU 27 next week. Farage had reportedly packed up his office only to unpack it again so he could pose up with his boxes for photographers.

One departing MEP remarked that she had not been approached for a single interview from the British press since her arrival in Brussels in May, only to give 15 in a day.

Emotional scenes as MEPs vote for UK to leave the EU

It was standing room only in the press gallery as camera crews lined up for the speeches ahead of the vote.

“Sad to see a nation leaving, a great nation that has given us all so much economically, culturally, politically, even its own blood in two world wars.

“It’s sad to see a country leaving that twice liberated us, twice gave its own blood.”

A series of UK MEPs rose to make their farewell speeches, including Sinn Fein’s Martina Anderson furious at Northern Ireland being dragged out of the Union “against our will”.

Many said they expected the UK to eventually return to the EU fold, vowing to build a good relationship between Britain and the EU.

But it was the Green party’s Molly Scott Cato who provoked the strongest reaction, receiving a standing ovation as she made a tearful farewell.

“Now is not the time to campaign to rejoin but we must keep the dream alive, especially for young people who are overwhelmingly pro-EU,” she said. “I hold in my heart that one day I will be in this chamber, celebrating our return to the heart of Europe.”

Michel Barnier, who is leading the task force for future negotiations with the UK, spoke to the chamber in French, saying: “The UK had a referendum and the majority, democratically, chose to leave the European Union.

He listed all the work that lays ahead before the eventual relationship between the UK and the EU is established, saying it must be conducted with “patience and respect”.

Michel Barnier, famous for his reluctance to speak in any other language but his own, finished in English with the words: “In this new beginning I would really and sincerely like to wish the UK well.”

After the vote, President of the EU Parliament David Sassoli held a farewell ceremony for departing MEPs, allowing them to make one last farewell speech in a reception space in the parliamentary building.

Although mostly good natured, there were shouts of “shame on you” and “sore loser” from the crowd as different MEPs took to the podium.

Britain will officially leave the EU at 11pm UK time on Friday.