Lee Pomeroy, 51, had been travelling into the city with his 14-year-old son on January 4 when he was allegedly knifed to death by Darren Pencille after an argument.

The wife of a man stabbed to death on a train wiped away tears in court as a jury watched footage of the horrific attack.

Lee Pomeroy, 51, was knifed 18 times in a ‘quick and frenzied attack’ by Darren Pencille on a London bound train from Guildford in Surrey on January 4.

Pencille, 35, denies murdering Mr Pomery but is caught on CCTV launching a vicious attack on the father over an argument over whether he was blocking the train aisle with his 14-year-old son.

Today  the Old Bailey saw footage of Mr Pomeroy confront Pencille after he made the ‘snide’ comment: ‘Ignorance is bliss’ as he walked past them on the train.

The pair moved into another carriage on the train as it travelled from London Road in Guildford to Clandon train station and can be seen gesticulating at each other in a heated row.

Pencille then pulls a knife from his pocket and plunges it into Mr Pomeroy’s neck – just five minutes after the three had boarded the train.

Giving evidence today investigating officer DC Mark Farmer said: “The injuries you can identify where they potentially occurred from the CCTV.

“It is a quick and frenzied attack.”

The wound to Mr Pomeroy’s neck opened his jugular vein and carotid artery.

Pencille struck 17 more blows as the unarmed father tried to defend himself.

Other passengers can be seen fleeing the carriage as blood pools around the door area where the two men are grappling.

As Mr Pomeroy staggers away from Pencille he collapses into a seat and can be seen panting heavily.

Pencille, still holding the knife, appears to fold it so only the blade is showing and picks up his possessions including a pair of sunglasses and a hat which had fallen off during the fight..

He can then be seen fleeing the train as it pulls into Clandon train station. 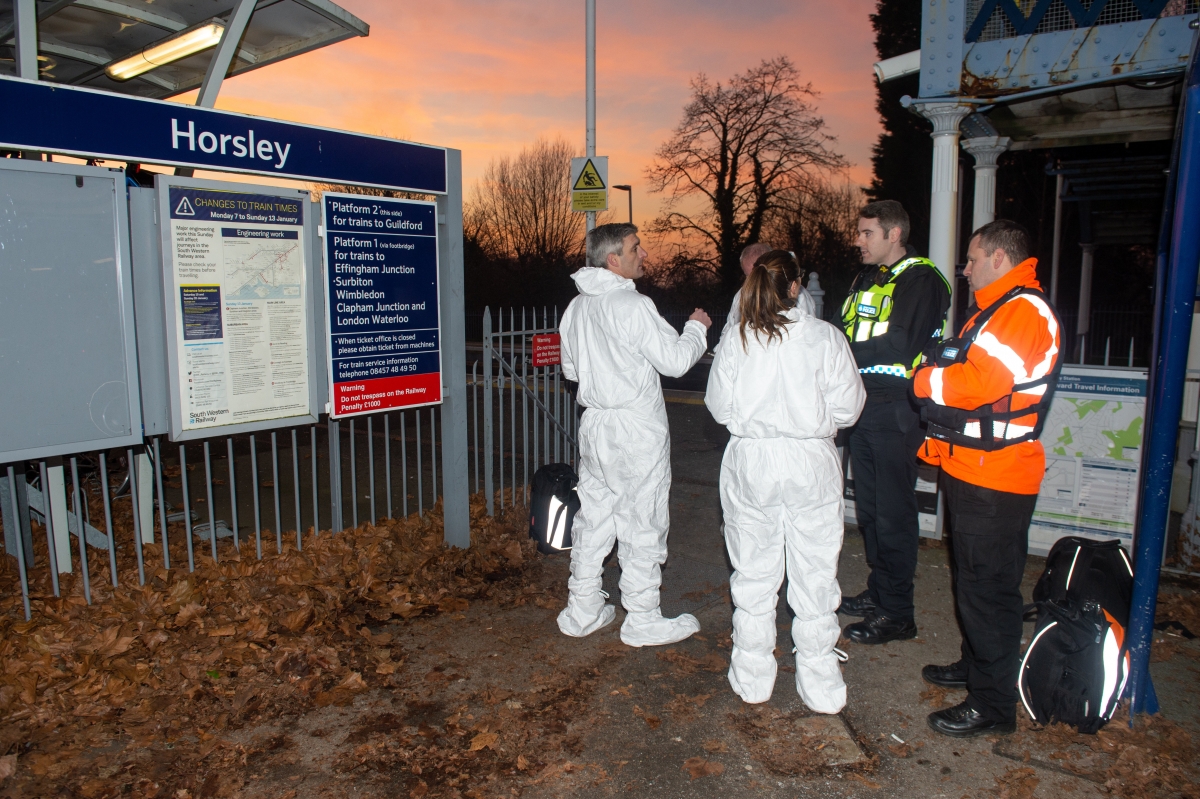 Chelsea Mitchell, 27, is accused of assisting an offender after collecting Pencille from Clandon and taking him back to her home in Farnham.

She is seen purchasing antiseptic wipes and plasters from a hospital chemist which were allegedly used by Pencille to ‘clean up’.

Mitchell was later seen on CCTV in a Tescos in Chichester buying hair clippers and razors. The pair are believed to have stayed the night in Bognor Regis before returning to Mitchell’s flat in Farnham the next day.