If Covid19 can indeed be cured by tonic water as claimed, let’s hope there’s also a cure for stupid. 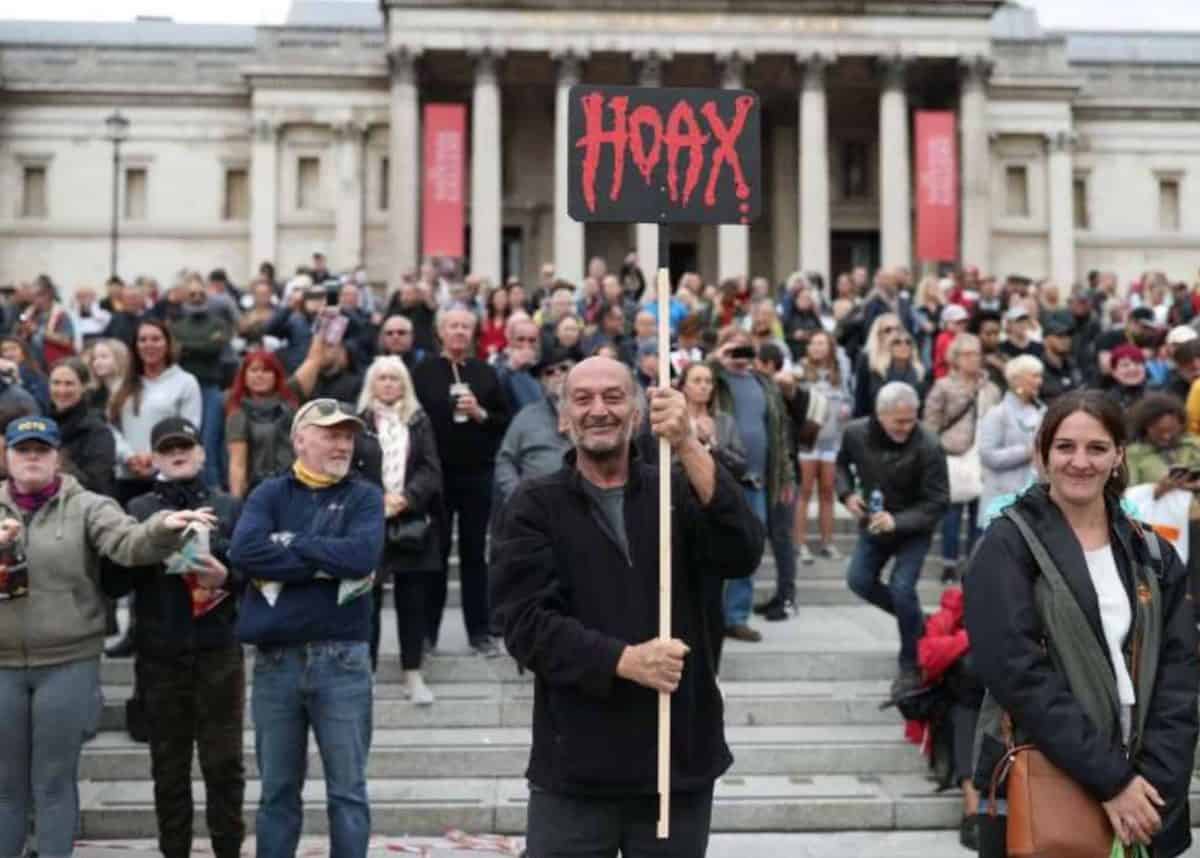 Thousands of conspiracy theory believers, anti-vaxxers, Q-anon believers and mask-sceptics gathered in London’s Trafalgar Square to be addressed by what was billed as “World Class Doctors and Nurses Speaking Out.”

Despite the pandemic claiming over 850,000 lives worldwide, the nation’s numpties gathered in the capital, some with signs proclaiming Covid19 a hoax.

The Metropolitan Police had advised that anyone attending a gathering of more than 30 people may be at risk of committing a criminal offence and there were 19 arrests.

Posters had promised those attending “Top World Class Doctors and Nurses Speaking Out.”

So with the rest of the world’s medical scientists, doctors and nurses occupied in fighting Covid-19, who are these medical experts telling the “Real Truth” to all those gathered in Trafalgar Square with not a mask in sight?

Dr Kevin Corbet (sic) is Dr Kevin Corbett – a Dr of Philosphy. Corbet is a trained nurse but left nursing to lecture. His 15 minutes of fame has involved claiming that there is no scientific proof of the existence of the virus that has claimed the lives of over 540 UK nurses and healthcare staff in the UK. Not sure how their colleagues would feel about that.

Here he is comparing vaccinating people to stop the pandemic to ‘Hitler’.

Not that Corbett is obsessed by Nazis, but he also called London Mayor Sadiq Khan’s plan to put on extra school buses to help make children’s return to school safer “NAZIFIED CHILD-ONLY BUSES.”

Nazi-obsessed Dr Kevin Corbett should have been perhaps more concerned that he was joined on the bill by a disgraced medic who is an actual hard right figure now.

Also snubbing the NHS workers who have risked their health to treat patients despite UK’s Covid death toll of over 40,000 was Professor Dolores Cahill.

University College Dublin has distanced itself from Cahill after she promised to “debunk” coronavirus measures in an interview with an alt-right Youtuber. 130 medical students there signed a letter calling on her college to disavow her views that social distancing etc was unneccessary in a video since removed by Youtube.  She has also been asked recently to resign from an EU scientific committee she was on over her bizarre claims.

Professor Cahill’s latest research publication appears to have been retracted.

If that isn’t a red flag about her credentials, her chairing the hard right, anti-EU, anti-abortion Irish Freedom Party should be. Party leader Hermann Kelly has appeared in videos endorsing white supremacist “grand replacement” conspiracy theories that the white population is set to be replaced by non-white, non-European people.

The 73-year-old is infamous for appearing at events alongside other conspiracy theorists, including Holocaust denier Nicholas Kollerstrom. Piers Corbyn is also a member of Clexit – a pressure group celebrating Brexit, and calling for the next step of Britain abandoning any agreements to reduce carbon pollution and tackle global warming – which they claim is a hoax.

The conspiracy theorist who has also promoted theories about false flags, earthquakes being caused by the Sun, 5G and anti-vaccination propaganda was among 19 arrested at the rally. It is the third time in three months he has been arrested at such events.

Despite being called a “real doctor” often Eric Nepute is not an MD or DO — so not allow to be recognized as a medical doctor in the US where he shot to fame with contradictory claims about Covid inc Schweppes Tonic Water is a cure. “I’m a physician,” he claims at one point in the viral video. He’s a chiropractor…

In case you are tempted to treat a relative with a coronavirus infection with a glass of tonic water, the ingredient Nepute refers to is Quinine which is a treatment – but for Malaria. And in therapeutically relevant amounts. The Food and Drug Administration  limits quinine content in tonic water to no more than 83 parts per million.

He appears to also believe in Donald Trump’s dangerous conspiracy theories about postal voting in November’s US election, that many warn are an attempt to limit voting and tamper with the election.

Dr Andrew Kaufman must be a medical expert though, right? Covid conspiracist Kaufman is a “natural healing consultant” whose 15 minutes of fame has involved spreading the debunked nonsense that vaccines to combat the Coronavirus pandemic will somehow alter people’s genetic makeup. David Icke was convinced enough to get him on his show.

Kate Shemirani calls herself Natural Nurse in A Toxic World and stresses her qualifications. Her nursing registration was suspended by the Nursing and Midwifery Council after spreading nonsense about Covid19 and vaccines. She has been suspended multiple times by Facebook for harmful misinformation to her 73,000 followers, believes in Satanic cults, false flags and David Icke. She appeared alongside the former Coventry goalkeeper – turned “Son of the Godhead” – turned conspiracy theorist on Saturday.

As #Covidiots started trending on social media, David Icke also addressed those gathered in Trafalgar Square. He believes the moon is hollow beaming thought control at the Earth, the Queen is reptilian and pretty much everything is a ‘Zionist’ conspiracy.

Dr Adil is Iqbal Adil whose medical experience is as a surgeon. He has been suspended by the General Medical Council for peddling conspiracy theories in now deleted YouTube videos. The 61-year-old who qualified in Pakistan has dismissed Covid as a “hoax.”

His supporters have launched a petition on Change.org, with just over 2,000 signatures, calling on the GMC to reinstate him. The petition says: “We the doctors community (sic) within U.K. and across the world feel that it’s injustice (sic) to suspend Mr Adil on his personal point of view on the Covid-19 without giving him chance to reflect upon his video before enforcing suspension .”

No cure for stupid

Dr Sherri Tenpenny also has no medical experience in immunology, virology, or public health, nor has she ever published peer-reviewed research in any related area.

She is an osteopath and vocal anti-vaxxer. Her tour of Australia was cancelled due to public outcry. She has no medical experience in immunology, vaccinology, or public health, nor has she ever published peer-reviewed research in any related area.

Republican Senator Dr Scott Jensen was also on the bill. He is not standing for reelection again. In a July 5th video that Jensen posted to Facebook, Jensen claimed that he was under investigation by Minnesota Board of Medical Practice in relation to a April 7th TV interview in which he claimed he was told to falsify death certificates with Covid19 as the cause of death and for comparing Covid19 to the Flu.

It is hard to find anything on Dr Mikael Norway – however you spell his name, which would suggest he may not be a major figure on the public health or virology field. Please comment below if you have any more details.

A quick Google exposes who these “Top World Class Doctors and Nurses” really are. It’s a pity the maskless morons who thronged into Trafalgar Square days before children are due to start back at school hopefully not precipitating a second wave, didn’t do just that before putting themselves and others at risk.

I’m betting there will be a Covid19 vaccine before there’s a cure for stupid.