As the more reckless Tory leadership candidates are vying to appear to back a no deal Brexit as an actual possibility for the country in order to try to distance themselves from the deal their government negotiated with the EU, Rory Stewart has gone viral with this video clip where he spells out just how […] 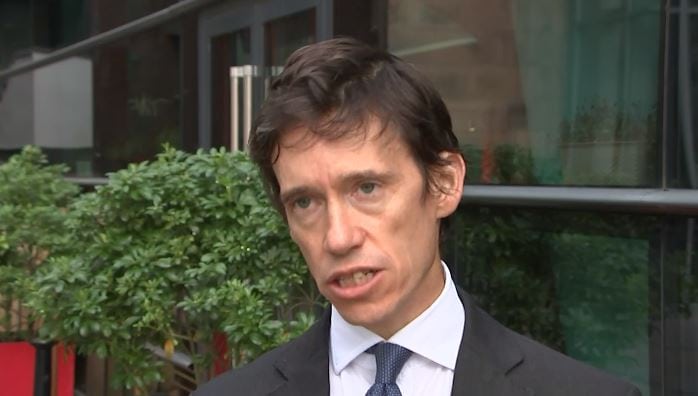 As the more reckless Tory leadership candidates are vying to appear to back a no deal Brexit as an actual possibility for the country in order to try to distance themselves from the deal their government negotiated with the EU, Rory Stewart has gone viral with this video clip where he spells out just how deluded or dishonest his colleagues are.

“WTO terms, by definition are the worst possible trading terms in the world. It’s the terms that Afghanistan has been trading on,” admitted Interantional Development Minister Rory Stewart.

And exposing the lie that his fellow wannabe Tory leaders advocate by blithely pretending leaving the EU with no trade deals negotiated is “believing in Britain,” he explained the disadvantages the country would be in, attempting to renegotiate all its trade deals from a position of severe weakness. And probably ending up back where are now after years of negotiations.

And when asked about his ERG Brexiteer colleagues who argue prices would come down with zero tariffs with the rest of the world, he explained how that that would be because British farming and industry would be wiped out as the UK would be flooded with foreign produce while facing greater obstacles than ever exporting to our current trading partners.

Rory Stewart’s honesty was widely applauded by people across the political spectrum today.

Who are the Tory leadership candidates?

These are the Conservative Party would-be leaders in order of likelihood according to political betting sites:

Penned a column for staying in the EU and one for leaving, before deciding the Leave campaign was more politically expedient. Despite being Foreign Secretary during the Brexit negotiations, resigned explaining how the deal would make the UK a “diminished” rule-taking “vassal state” to the EU, before supporting it again, now campaigning against it and seriously considering an actual no deal Brexit, insisting now that the UK will leave on Halloween “deal or no deal”.

Currently facing a trial for lying during the Brexit campaign.

Just as in the last leadership contest showed early signs of backing his colleague Boris Johnson, before running against him again. Acknowledges how damaging leaving the EU without a deal would be.

Brexit cheerleader Andrea Leadsom, has always been a fierce critic of the Brexit deal that was negotiated, resigning over it and naively insisting that she could renegotiate a better one despite the EU yet again this week insisting the member states will not be renegotiating the withdrawal deal again.

Didn’t inspire the most confidence as Brexit Secretary when he appeared baffled by the fact the UK relies on Dover’s channel crossing at Dover.

Losing support from his colleagues for flip-flopping all over the place.

Despite previously insisting he preferred no deal to no Brexit, the foreign secretary warned picking a party leader who advocates recklessly leaving the EU without a deal would be political suicide for the Tories. – Not because of the catastrophic damage that would cause the country, mind.

No, rather because a Tory leader adviocating a no deal Brexit would be defeated in a vote of no confidence in Parliament, before being defeated in a General Election by Jeremy Corbyn, Hunt warned his party.

“We must not go back to the electorate asking for their mandate until we’ve delivered what we promised we would do last time, which is to deliver Brexit,” Hunt told BBC’s Radio 4 Today Programme, “it would be absolutely catastrophic for us as a party.”

Newsreaders get his name wrong sometimes.

Appears to be more realistic than most of his wannabe PM colleagues about the devastation leaving the EU with no deal and soley relying on WTO trade terms would cause the country.

Appears to be attempting to be a man of the people by posting creepy man in the street videos of himself. Sometimes with ordinary people.

Despite very little ministerial experience, having become Brexit Minister after the negotiations were concluded, this wannabe party leader has been acting as if he has been preparing for the moment all of his life.

Appears remarkably relaxed about the prospect of a no deal Brexit, now saying that despite it not being his “preferred option,” it’s “not massively damaging” to Britain.

Not sure what Cleverly’s “preferred option” is or how he plans to go about achieving it.

Determined to appear tough, whether using coastguard patrols looking for refugees in dinghies as photo-opportunities – leading to accusations of “scaremongering” , or insting this week that a no deal Brexit won’t affect the UK’s “capacity to protect itself.”

Currently insisting on preparing for a no deal Brexit, a prospect which strikes terror into his beleagured, ill-prepared short-staffed staff.

The Health Secretary is an unlikely contender for the top job, but the longer the contest goes on, and the more the others open their mouths, the more he seems normal by comparison.

While ruling out a second referendum on our membership of the EU, injected a bit of controversial reality into the Tory leadership race this week by explaining:

“The brutal reality is, no deal is not a policy choice available to the next prime minister.”

Not entirely versed with reality, McVey has been not only associated with the worst excesses of Tory welfare policies at the DWP, but with lying about it to MPs about the suffering and costs of those policies. More than once.

She recently tweeted an old, debunked myth that all EU countries would be forced to join the Euro and resigned tearfully in protest against the EU withdrawal deal her government concluded.

A Brexit ultra, McVey scoffed at Jeremy Hunt’s suggestion that pursuing a no deal Brexit would be “political suicide” for their party.

Least likely to lead the country out of the EU.

Architect of a failed attempt to get Hard Brexiteers and Remainers in his party to come to a compromise, that appeared to everybody else as kicking the shitty Brexit tin even further down the road.

The Brexiteer Housing Minister joined the Tory leadership race on Monday, promising to bring “fresh new ideas” to the contest.

One of his “fresh new ideas” is if exporting “sheep meat” to Europe is scuppered in the event of a no deal Brexit, it could be used to feed schoolchildren and hospital patients.

“Could we use it in hospitals and in schools or could we compensate farmers for any damage that might be caused?” Malthouse suggested in an interview on LBC this week, presumably attempting to show off his resourcefulness.