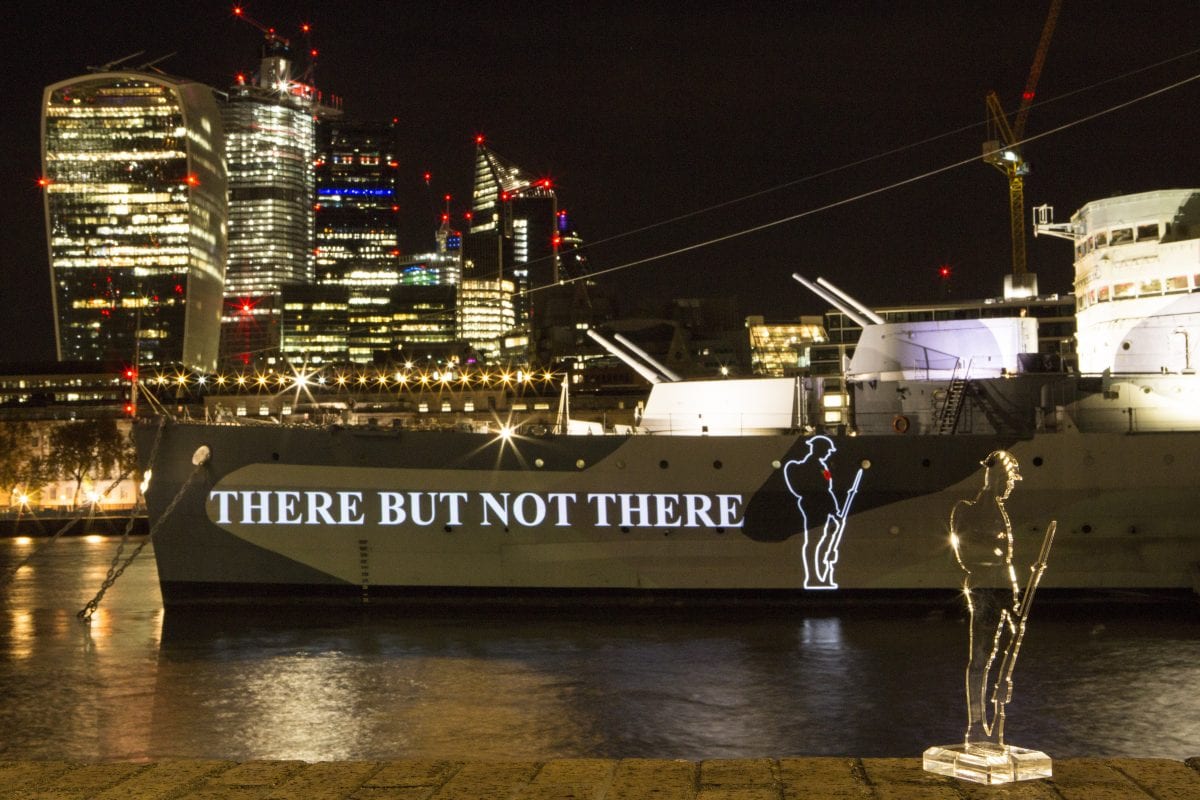 On the eve of Remembrance Day, the illuminations lit up famous buildings across major towns and cities including London, Belfast, Warwick, Cardiff, Edinburgh, and Newcastle-upon-Tyne.

The ghostly World War One soldier projections form part of an art installation called “There But Not There”, marking the centenary of the end of Great War.

As the nation prepared to gather to mark the significant Remembrance Day, hundreds stood in awe of the impressive light display memorials.

The “There But Not There” installation was launched in February, and the Tommies silhouettes have been spotted all over the UK since the campaign’s launch.

The silhouettes commemorate the 888,246 British and Commonwealth troops who died in the First World War, whilst also raising funds for military charities supporting veterans today.

The patron of the campaign is General The Lord Dannatt, former Chief of the General Staff.

He said: “As we reach one hundred years since the Armistice, it is vital that we reflect on the sacrifice made by an entire generation of servicemen and women.

“These wonderful landmarks coming together provide a remarkable representation of the nation doing exactly just that.

“We have been incredibly moved by the overwhelming public support that we have received across the country.

“This has led to more than £4 million raised for military and mental health charities.”

But he added: “However, our journey doesn’t stop here; we need the public’s backing more than ever in raising funds to support our veterans in crisis.

“Mental health remains a crucial issue and we hope people will see these poignant silhouettes and be inspired to buy their own Tommy, both to remember the fallen and to help those that continue to struggle today.”

There But Not There has generated more than £4m in sales and donations since its launch in February.

Alongside the six-foot Tommies, 10-inch Perspex Tommies are also being produced and sold, made by veterans to support veterans.

All profits made from the sale of these Tommies will go to a group of mental health and armed forces charities.

These are: The Royal Foundation, Walking With The Wounded, Combat Stress, Help for Heroes, Project Equinox: Housing Veterans and Medical Students and Commonwealth War Graves Foundation.