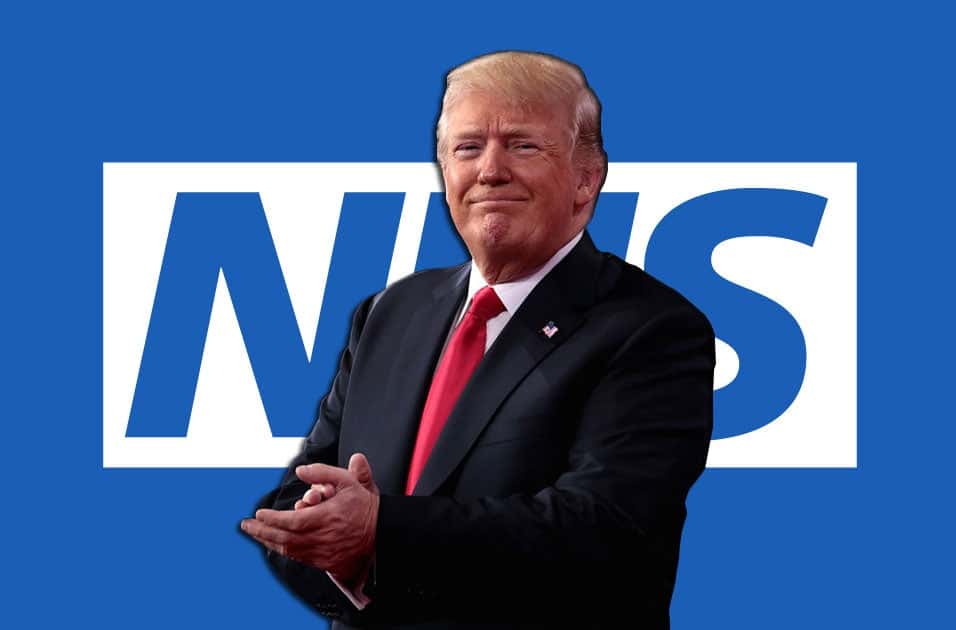 Donald Trump has confirmed that the NHS will be on the table in a post-Brexit trade deal.

Speaking at a press conference today the US President said:

“When you’re dealing in trade everything is on the table. So NHS or anything else, a lot more than that, but everything will be on the table, absolutely.”

The comments come just days after US ambassador to the UK, Woody Johnson caused uproar by making similar suggestions, and Trump’s comments are likely to unsettle many Brits who are still in the dark about what future trading relationships might look like.

Jeremy Corbyn, meanwhile, addressed a protest against Trump, insisting that the NHS “is not for sale.”

“Theresa May stood next to Donald Trump as he said the NHS will be “on the table” in a US trade deal,” the Labour Leader later tweeted, adding: “And that’s what Tory leadership contenders and Farage are lining up for the No Deal disaster capitalism plans they have. They all need to understand: our NHS is not for sale.”

Matt Hancock, the Health Secretary vying to replace Ms May as prime minister, immediately hit back on social media too, vowing any future trade deal brokered between the UK and US will not include the NHS.

“Dear Mr President. The NHS isn’t on the table in trade talks – and never will be. Not on my watch,” he said.

And Jeremy Hunt also insisted that the NHS will remain off-limits to American companies.

But there may be little they can do.

With the UK desperate to secure new trading relationships outside of the EU they may be forced to bow to Trump’s demands.

The US President insisted once the UK deliver Brexit it will be able to strike a “phenomenal trade deal” which has the potential to be three times the size of its current arrangement.

But that is likely to come with sacrifices.

Earlier in the day Jeremy Corbyn told a protest against the President’s visit that Labour would “fight with every last breath” to save the NHS from the clutches of US healthcare firms.

“We’re in the midst of a debate about the future of the relationship between Britain and Europe and the rest of the world.

“The basis of that debate should surely be that we encourage the protection of jobs and living standards and public services and reach out to people all across the world.

“But it should not be a debate about how we go forward with no deal at the same time as offering up our precious, wonderful National Health Service to private American companies to come in and take it over.

“We will not stand for that. We will fight with every last breath of our body to defend the principle of a healthcare system free at the point of need for everybody as a human right.”