Jack Williment-Barr, 4, had to be covered with coats by his mother Sarah Williment to keep warm as he waited for a bed with suspected pneumonia in an overstretched Leeds hospital.

In a new low showing just how much contempt the Conservatives have for the public and telling the truth, last night senior Tories told an appalling lie to distract from Boris Johnson’s callous failure to own responsibility for the cuts that have left a Northern hospital unable to provide beds for all its young patients.

Boris Johnson had come under fire on Monday for his apparent lack of empathy over the treatment of a four-year-old boy who was left sleeping on the floor of a hospital because of a bed shortage.

Jack Williment-Barr had to be covered with coats by his mother Sarah Williment to keep warm as he waited for a bed at overstretched Leeds General Infirmary (LGI) with suspected pneumonia.

A photograph of the youngster has been widely shared on social media, turning his treatment into an emblem for a decade of Tory decimation of the NHS – just days before the polls open for Thursday’s General Election.

TV’s Joe Pike attempted to discuss the case of a 4-year-old with Boris Johnson who arrogantly refused to look at the picture on the reporter’s phone and pocketed the phone instead while  arrogantly repeating the slogans that have been his constant throughout the campaign.

On this occasion though, the PM’s  empty slogans were an embarrassing example of his total lack of empathy on a day when he was trying to win over Northern Brexit-voting communities with his meaningless “get Brexit done” slogan.

Health Secretary Matt Hancock was sent to the hospital in a bid to quell the storm – and said he had apologised to the family. But then the Tories resorted to an old tactic of finding an affront by a protestor to distract from the actual issue.

In a dishonest attempted to distract from the story being all about the Government’s callous treatment of the NHS and those who cause them embarrassment by highlighting the effects of austerity, a fake news story about an assault on one of Matt Hancock’s team was circulated.

There was a small handful of people outside the hospital protesting about the Health Secretary and his party’s devastating record on the NHS, and one of Hancock’s aides walked into the bag of someone’s finger as they pointed.

But the Conservatives seized on an opportunity to make the story all about an assault, and why let the truth  get in the way. Sadly, the Conservative message was immediately shared by the usual journalists unquestioningly.

BBC Political Editor Laura Kuenssberg tweeted that the protest “turned nasty”, and that a Labour activist “punched Hancock’s adviser”. ITV’s Robert Peston said the aide was “whacked in the face by a protestor as he tried to help Hancock into his car”, and said police were on the scene.

The story of Labour activist thuggery was soon top of the Mail Online’s home page and shared feverishly online by outraged right-wingers happy to forget about Boris Johnson’s total lack of empathy for a young victim of Tory austerity.

But then the truth emerged as fortunately someone had filmed what actually happened: a Tory staffer walking slowly into the back of an outstretched pointing arm of someone who had been remonstrating with Matt Hancock.

One man pointed at Matt Hancock’s car as it drove off, saying “these people have devastated our country,” and Hancock’s colleague can be seen clearly walking into the back of his arm.

The Mail Online went top of its home page with the story. Twitter was in uproar. And Johnson’s lack of care for a sick child forced to sleep on the floor had dropped from the agenda.

Peston was forced to apologise for repeating the fake news fed to him by “senior Tories”, as was his BBC counterpart Laura Kuenssberg, eventually.

On a day in which Johnson had threatened the BBC with removing its licence fee, the Tories bullying attitude, disregard for the truth and low tactics to dominate the election narrative left a bad taste in people’s mouths.

In another move which will be seen by critics as a sinister effort to distract from the case, Johnson had told workers in the North East that he is “looking at” abolishing the BBC licence fee.

West Yorkshire Police, unlike what had been reported said it was “unaware” of any reports to the force in relation to the incident and the hospital declined to comment on any aspect of the visit.

‘Bare-faced lying’ by Tories to distract from their NHS ‘disgrace’

“It is shocking that the Tories are so desperate to distract from a four-year-old boy sleeping on a hospital floor because of their cuts to our NHS that once again they have resorted to bare-faced lying,” a Labour spokeswoman said.

“This is a new low and the Conservative Party has serious questions to answer.”

Shadow health secretary Jonathan Ashworth criticised Johnson’s arrogant behaviour earlier, and said: “Refusing to even look at an image of a child suffering because of Conservative cuts to the NHS is a new low for Boris Johnson. It’s clear he could not care less.

“Don’t give this disgrace of a man five more years of driving our NHS into the ground. Sick toddlers like Jack deserve so much better.”

During an election visit to Bristol, Labour leader Jeremy Corbyn branded the treatment of a four-year-old boy lying on the floor in a hospital as a “disgrace”.

“He’s had nine years to properly fund the NHS.

“A child being treated on the floor is a disgrace to our society,” Jeremy Corbyn said. 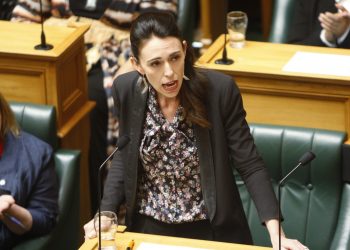